Posted in: The Reel World by Brent Lorentson on March 30th, 2018 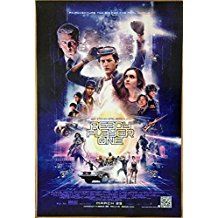 Like so many others, when I read the book Ready Player One by Ernest Cline I simply fell in love with the nostalgic ride through the 80’s, all thanks to the virtual reality world called The Oasis.  From start to finish it was a book filled with pop culture references that would make film and video game geeks squeal with delight, and it was no surprise that the book was a hit and would be turned into a film.  There were only two names I could think of that could ever come close to making this film a reality: Robert Zemeckis and Steven Spielberg.  With Spielberg involved, he was the only person I could imagine that had the clout to get all the licensing rights needed to pull this adaption, but still the biggest question I had was does Spielberg still have it in him? I’m not questioning the man’s talent, but instead it’s the magic and wonder he would bring to his films, from Close Encounters of the Third Kind, ET, to Jurassic Park, where he could get us to believe the fantastic and impossible was real while we sat in a dark auditorium watching his film.

The Oasis is an open virtual realty world like nothing we have ever seen before, but with the way our technology is developing, it is quickly becoming a possibility for things to come.  There are worlds and planets within The Oasis where you can be in constant battles to win coins, or go to exotic places for a vacation.  It’s a world where you can be whatever you want and experience just about anything you want.  Basically think about Westworld but on steroids.  The creator of this world is Halliday (Mark Rylance), who before dying announced to all of The Oasis that he created an Easter Egg hidden somewhere in The Oasis, and whoever was to find it would gain sole control of The Oasis and all of Halliday’s fortune.

To get to the egg, though, a player will need three keys that are also spread throughout The Oasis, and each key will present the player with a certain challenge.  And it’s in pursuit of the first key where we first meet Wade Watts in his avatar form of Parzival (Tye Sheridan).  For those who have read the book and seen the trailers, this is also when we get to first see the Delorean.  The first challenge for the key is a giant race where we get to see the Delorean race alongside the Bigfoot monster truck, the Akira motorcycle, and numerous other classic cars from film, television and video games. This race is insane and filled with so much over-the-top geek joy, it’s impossible to not feel like a little kid.  Because this is a videogame world, the rules of the real world don’t exist, so we get to enjoy perhaps one of the most over-the-top racing sequences ever put to the screen.

Now a good portion of the film takes place inside The Oasis, which means a lot of the film is CGI.  While The Oasis doesn’t quite look how I imagined it, this is still one hell of a world they have created here.  The fun they have with creating these worlds and avatars is great.  It’s when we transition to the real world that the film continues to stay loyal to the book but gives us so much to look at.  I can imagine you could watch this film numerous times and continue finding cool new things to geek out about.  Spielberg has explored the future before. The look here, though, is advanced; it shows us a pollution-riddled city that is overpopulated, with people escaping in the VR headsets. But it’s the real-world Wade Watts who pulls us into the story.  He’s had a rough childhood, living with his aunt and her drunk boyfriend. It’s obvious why he loves escaping from his real life and living in The Oasis, and it’s Tye Sheridan’s performance that sells this.

Though the film takes some liberties with the book, thankfully the relationship with Aech (Lena Waithe) and Art3mis (Olivia Cooke) remain faithful to the source material.  When we get to see Parzival and Art3mis together in both The Oasis and the real world, we get to see Spielberg doing what he does best working with young talent.  I do wish we got more time seeing Sheridan and Cooke on screen together, because there is some strong chemistry here, and the budding friendship and romance seem genuine. As for Aech, this is one of those characters who wins you over and quickly becomes one of the more iconic sidekicks in recent film history.

This brings me to the film’s villain, Sorrento (Ben Mendelson), who is basically the stereotype corporate crony but is a villain who is fun to hate, especially when we see his interactions in The Oasis.  In the Oasis we see him working with the character I-Rok (T.J. Miller). For those familiar with the character in the book, let me just warn you this is one of the major changes, but Miller manages to pull off being the henchman in a fun and amusing way.

Honestly the plot is simple, and it is very familiar. After all, it’s not all that different from Willy Wonka and the Chocolate Factory. Only instead of chocolate, the prize is running a large video game world.  It’s the nostalgia that will spark for many of the adult viewers, though I feel this is a film kids should have a blast with as well.  The Oscar for best visual VFX may as well just be given to Ready Player One at this point, because this world is like nothing we’ve seen on screen before.

Zak Penn and Ernest Cline worked together on the script, which is a blessing in a lot of ways.  While it is fun seeing many of the things from the book come to life, there are some critical changes that I enjoyed just as much.  I’m a little disappointed, though, at how much of the old school Atari and video gaming is missing from the film, though; after all the book was a love letter to the 80’s, but instead the movie seems to delve more so into the 90’s and current video games. But the biggest thing that is missing from this film is a score by John Williams. Alan Silvestri delivers a solid score, but it just seemed like a no-brainer to see Williams collaborate with Spielberg on this project. Paired with the score, though, we get several hit 80’s songs. When Blue Monday kicks in at the dance club, for instance, it’s one of the visual marvels of the film.

There are going to be people who hate this movie, and then there will be the vast majority of people who will simply have a blast with this film.  Its 140 minutes but honestly this film doesn’t drag at all.  I also believe this is one of those films where people will come away with a variety of favorite moments.  Personally I love the sequence where that involves getting the second key, which hopefully no one spoils for you, because it’s truly a unique moment in cinema history (in my geeky humble opinion).  I’ve heard friends complain that the film looks too much like a video game, I understand the complaint, but that’s sort of the entire point of the film.   Despite being about a video game world, it’s the human connection that manages to resonate most here, and it’s that interaction I hope viewers take away from this.

We live in a time where technology has us connected at the hip, whether it be through texting, Facebook, or using our Alexa devices in our homes, Ready Player One is a glimpse at what things may come. As I write this, Ernest Cline is said to be working on a follow-up book, Ready Player Two, which no doubt will involve more adventures in The Oasis. What will be interesting is to see where things go from here for the sequel book as well as a possible sequel film.

Brent Lorentson is a horror writer and film critic based out of Tampa, Florida. With a BA in Digital Film, he co-wrote and co-directed Scavenger Hunt. His short stories have appeared in various horror anthologies. In 2019 his short script Fertile Blood will be a part of the anthology horror film Slumber Party. He is currently working on his first novel A Dark and Secret Place set to be released in late 2019. Favorite Films: Taxi Driver, Fight Club, I Saw the Devil, The Wild Bunch, Dawn of the Dead, A Clockwork Orange, Pulp Fiction, Heathers, The Monster Squad, and High Fidelity.
The Good Fight: Season One Lego Star Wars: The Freemaker Adventures: Season Two