Posted in: No Huddle by Brent Lorentson on April 3rd, 2018 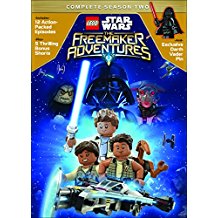 Ever since Disney purchased the rights to the Star Wars property, it was no surprise that Disney would take full advantage of it. Between the movies and TV shows it’s fairly easy to get your Star Wars fix, but is too much of a good thing a bad thing?  For Disney XD we have the animated LEGO series Star Wars: The Freemaker Adventures, and though it is targeted towards kids, there is plenty of fun for the long-time fans as well. What I already enjoyed about the series is that instead of following established characters in the Star Wars canon, we get to get a glimpse at the life of the mechanics who repair the ships after returning to battle. Granted, the story seems to always venture off to other planets and many adventures throughout the galaxy.

I missed out on season one, but it was fairly easy to jump into the second season of the show.  The second season generally takes place during the same time as Return of the Jedi, so for fans of the movie, we can finally get to see what else the Rebellion and the Empire were up to during this time.

Because this is aimed towards kids and is an animated LEGO production, as you should expect this is more of a lighthearted romp through the galaxy. The show centers on the Freemaker family, Rowan (voiced by Nicolas Cantu) and his older brother Zander (voiced by Eugene Byrd) and his older sister Kordi (voiced by Vanessa Lengies). If you were worried that this is a show where the family just hangs around and repairs ships every episode, don’t worry, there is plenty of action and adventure in every episode as the Freemakers travel the galaxy on several missions.

Rowan is a 12-year-old Jedi in training. He’s advanced enough that the Emperor wants Rowan to join him on the dark side.  Since the Emperor is too busy with rebuilding the Death Star, he creates M-OC, a droid with the specific purpose to bring Rowan to the Emperor. Episode after episode we’ll get to see Rowan and M-OC confront one another and have numerous duels.  For kids this will be fun and entertaining, but for adults, seeing the same thing happen over and over does get a bit tiresome.

One of the more entertaining story arcs involves a ship called The Arrowhead. It’s a concept Rowan comes up with that his family and others are tasked to build.  It’s the unique design and parts of the ship that give the Freemakers reason to travel across the galaxy hunting for parts and dealing with unsavory characters along the way.  The Arrowhead is a pretty awesome ship, and when we get to see it in action, it allows for some pretty entertaining moments.

While Zander and Kordi are important to the story, they typically are stuck doing the same thing each episode with no real character development.  Basically if there is a need for a crazy plan that will never work out as planned, that’s the job for Kordi, and if there is a need for a crazy pilot or need for a character to do something risky, it’s Zander who gets the call.  I understand the target audience is young kids, but a little more character development would be nice. As for the characters on the dark side, in true LEGO animation style we get villains who are more bumbling idiots than true sinister forces.  Seeing the characters on the dark side feels more like I’m watching an animated sequel to Spaceballs more than anything else (which isn’t a bad thing, really).  One of the truly funny bits in the series comes towards the end of the season when certain characters are trying to alert the Emperor of a possible attack, but the Emperor has insisted he not be disturbed under any circumstance. I’ll admit this had me chuckling as we see this sequence unfold.

While the animation doesn’t quite hold up to the quality we’ve seen in the LEGO films, it still looks pretty good.  The space battles in particular are what look best here and are worth giving the show a look for that alone.  The worlds we are taken to over the course of the season stick mostly to the canon we’ve heard about, with some new ones as well.  There is enough creativity put into the animation that it’s easy to enjoy, and at times look for little Easter eggs sprinkled in certain episodes to see what is going on from the Skywalker storyline.

As the season wraps up, it concludes where Jedi ends, which has me wondering where will the story head to next?  The season contains 12 episodes that each run about 23 minutes each and contains five mini-episodes as well.  This is the kind of show that kids who love Star Wars should enjoy quite a bit. As for an older audience, there are things even adults will enjoy.

Brent Lorentson is a horror writer and film critic based out of Tampa, Florida. With a BA in Digital Film, he co-wrote and co-directed Scavenger Hunt. His short stories have appeared in various horror anthologies. In 2019 his short script Fertile Blood will be a part of the anthology horror film Slumber Party. He is currently working on his first novel A Dark and Secret Place set to be released in late 2019. Favorite Films: Taxi Driver, Fight Club, I Saw the Devil, The Wild Bunch, Dawn of the Dead, A Clockwork Orange, Pulp Fiction, Heathers, The Monster Squad, and High Fidelity.
Ready Player One The Sandlot: 25th Anniversary Edition (Blu-ray)