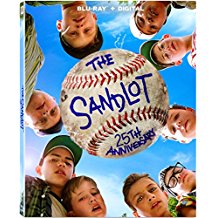 When The Sandlot first came out 25 years ago, I connected to the coming-of-age baseball story as strongly as Babe Ruth connected with one of his titanic, 400-foot homers. I grew up in baseball-obsessed Puerto Rico and I happened to be the exact same age as dorky protagonist Scotty Smalls. I’ve kept in touch with the film over the years, but Fox’s new 25th Anniversary Blu-ray re-release of The Sandlot was a great excuse to watch it from start to finish.

An adult version of Scotty Smalls recounts the story of his most memorable summer. As a fifth grader, Scotty (Tom Guiry) moved to a new town with his mom (Karen Allen) and stepdad (Denis Leary) just before the end of the school year. Scotty’s mom wants her sweet, nerdy son to actually get into a little bit of trouble during the summer, so he falls in with a group of kids who play baseball in a raggedy patch of grass called The Sandlot. The only problem is Scotty doesn’t even know how to throw a baseball. Fortunately, Scotty is taken in by Benny (Mike Vitar), the group’s leader and the best baseball player by far. During that one remarkable summer, the kids encounter a dream girl, arrogant Little Leaguers and a legendary canine menace known as The Beast, which swallows up any baseball that finds its way into his yard.

The Sandlot may be set in the summer of 1962, but the timelessness of the film’s story is a major factor in its enduring popularity. Director David M. Evans tapped into the unique camaraderie that comes from playing sports. (And from playing outside.) There aren’t really any big speeches or big emotional moments; the camaraderie is communicated through the play on the field and the way the kids bust each other’s chops. Evans, who also co-wrote the screenplay with Robert Gunter, nailed a bunch of important details in presenting this story: the way kids copy their favorite baseball player’s mannerisms/batting stances; the way there always seems to be one kid who is considerably bigger and better than everybody else.

Perhaps the biggest part of the film’s charm is that it’s absolutely told from a child’s point of view. Sure, the brief, awkward domestic scenes between Scotty and stepdad Bill (Leary nicely underplays Bill’s terseness; it would’ve been easy to overdo it) provide a surprisingly effective dramatic counterpoint, but the majority of The Sandlot consists of baseball, swimming pools and amusement parks. And, of course, The Beast! Evans has the most fun showcasing this kiddie perspective in the way The Beast is presented. There’s a completely bananas, black & white flashback sequence detailing The Beast’s origin story, and the dog is often made to look like he’s as big as a horse. It’s a perfect way of showing how kids’ imaginations run wild. Naturally, as soon as we see Bill’s autographed Babe Ruth baseball, we know something terrible is going to happen to it. The film’s final act has the gang banding together to get Scotty out of a major pickle and culminates with Benny showing us how he earned his nickname: “The Jet.”

The young actors carry the film capably and with plenty of charisma, even if nobody was lining up to hand them Oscars. Guiry makes for a naïve protagonist worth rooting for, while Vitar looks the part of the biggest (and best) kid on the block. The rest of the gang is comprised of characters with names like Squints (scene-stealer Chauncey Leopardi) and mouthy catcher Ham (‘90s two-sport star Patrick Renna, The Big Green), who made “You’re killin’ me, Smalls!” the go-to cry of exasperation for movie fans of a certain age. Marley Shelton (Planet Terror, Sin City) has a memorable scene as crush-worthy lifeguard Wendy Peffercorn. Allen and Leary are effective in their handful of scenes, while James Earl Jones pops up in a crucial cameo late in the game.

I was surprised to hear a few s-bombs sprinkled into the PG-rated film, but the fact that I didn’t previously notice or remember them is probably an indication of how minor they are. (Kids mildly cursed in a PG film, yet we’re all still here!) Either way, you shouldn’t let that stop you from showing The Sandlot to the young ones in your life; or from checking it out yourself if it’s been more than a few years.

The 25th anniversary edition of The Sandlot is presented in an aspect ratio of 2.35:1 and appears to be identical to the 20th anniversary release. The 1080p image is arrived at with an AVC MPEG-4 codec at an average of 23 mbps. The Sandlot, where the bulk of the film’s action takes place, has never looked better than it does on this new Blu-ray edition of The Sandlot. I actually still own a DVD copy of the film, and the first thing you’ll notice is the more vibrant image, especially when the action shifts to the 1950s. The green of the grass is particularly impressive, but all the exteriors look terrific. There is also little-to-no evidence of DNR as the film maintains a healthy amount of grain that suits the scrappiness of the story. Black levels are also strong, but the image occasionally looked a little soft around the edges. Still, watching this splendid-looking release alongside the DVD version shows you what a drastic improvement Fox made with this Blu-ray.

The DTS-HD Master Audio 5.1 track is also a retread from the previous Blu-ray. It still brings the rumble of The Beast to the subs, which is exactly where it belongs. Dialogue and overlapping kiddie chatter come through pristinely through the front speakers. The rears explode to life during a standout night game on the Fourth of July featuring fireworks, but they’re mostly here to deliver the ‘50s era rock that dominates the soundtrack. I would’ve liked a little more immersion, but the track makes up for it by acing all the sound effects. (The thud of Benny stepping on a base in the subs; the all-consuming crack of the bat.)

All of the bonus material has been ported over from the film’s DVD release over 10 years ago. You also get a set of 10 Topps baseball cards featuring the movie’s ragtag lineup. (These were also included in the 20th anniversary release.) The one new feature that comes with this Blu-ray is an all-new poster and booklet.

Featurette: (5:51) This cutesy promotional doc is the exact same one included on the old DVD, which didn’t come out in this decade. Unforgivable. Needless to say, the featurette is presented in standard definition.

The lack of new special features continues to be a travesty. (How cool would it have been to catch up with the cast 25 years later? Heck, I’d even take a mini-doc exploring how “You’re killin’ me, Smalls” became a thing.) As disappointing as this is, the audio/video upgrade still make this Blu-ray worth a pickup.

There was a small part of me that worried if my 30-year-old self had outgrown this film. I’m happy to report this movie will remain watchable “FOR-E-VER.”