13 Reasons Why: Season One 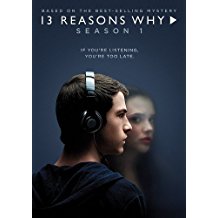 “Hey, it’s Hannah… get a snack. Settle in because I’m about to tell you the story of my life. More specifically, why my life ended. But if you’re listening to this tape, you’re one of the reasons why.”

13 Reasons Why started out as a novel in 2007. It didn’t catch the world on fire and went largely unread until something appeared to cause the novel to pick up steam in 2011. It hit the New York Times Best Seller list and started to become a teen phenomenon around middle and high school campuses throughout the nation. If Harry Potter didn’t provide enough proof that kids were still reading and doing it for their own enjoyment, this novel should do the job. There are no wizards or superheroes or distant alien worlds to explore here. The work is a very straightforward drama about some of the topics that real-world teens deal with everyday. Nothing is really taboo here; from cyberbullying to rape, it’s all covered. It’s even possible this particular work has saved a few lives over the years. Now Netflix has taken on the book and its serious themes in a new original series bearing the same title. Suicide is the second cause of death among teenagers these days, and this teen drama doesn’t shy away from the circumstances that might lead a young teen with their entire life ahead of them to a tragic and irrevocable decision.

Hannah Baker (Langford) is a high school student at Liberty High. She committed suicide pretty much right before the series’ first episode takes up the story. The focus of the series is Clay Jensen (Minnette) who has received a mysterious package at his doorstep. Inside there are seven cassette tapes and a map of the town. These are recordings that Hannah made before she killed herself. Each side is dedicated to a person for whom she blames for her suicide. There are 13 sides in all. Each person is instructed to listen to the entire set and then pass them along to the next person on the list. Clay is number 11. Of course, in 2018 it’s not quite so easy to find a player for cassette tapes anymore. Of course, that was part of the plan. Hannah wanted the exercise to be anything but easy. Unlike those who came before him, Clay is struggling with the things that he hears. He is taking a long time to reach the end. This works out great for the series, as each of the first season’s 13 episodes focuses on a side of the tapes. Hannah warns that the listeners are being watched, and if anyone breaks the chain or fails to listen to them completely, a copy will be released to the public, and potentially the authorities.

The series is told from several points of view. Much of each episode is narrated by the deceased Hannah, and she is an unreliable narrator. It’s up to the viewer to decide how much, if any, of her story is true. The show helps you along the way. We get the story through Clay’s point of view as the tapes cause him to flashback to specific moments, and we see those play out as he best remembers them. In the first episode Clay does a header from his bike onto the hood of a car because he was distracted by the tapes he listens to through a stolen Walkman. The accident conveniently provides him with a nasty gash over his eye that makes it easier for us to know when we’re watching present day Clay or flashback Clay. Clay ends up with some real conflict. In some ways he tries to bring some justice for Hannah, but he’s also dreading his own eventual tape, because he’s not sure what he did to lead to her death.

The show also gives us a bit of a standard drama mixed into these tape-related moments. Hannah’s parents are suing the school district for not doing enough to stop the bullying, and Clay’s mother ends up the attorney who represents the school. Kate Walsh and Brian d’Arcy James do a rather nice job of portraying the grief-stricken parents who are looking for answers in the wake of the tragedy. There are also the other culprits who have done things of varying degrees of severity to Hannah and who have a vested interest in seeing the story die with her. They present a real danger for Clay when it appears he may do something about the tapes.

Here I was completely surprised by the performance of Dylan Minnette, who at first appears to be a rather weak, or dare I say boring actor. Perhaps it’s his “every kid” look that makes him so undynamic at the start. Whatever it is, the character manages to take you by surprise, and you’ll be hard-pressed to recall exactly when that happened exactly. All I can say is that his story becomes overwhelmingly compelling, and the young actor pulls off a neat little trick on our expectations.

Of course, there’s a rather large cast of supporting players here. Because of the unique and pretty clever structure of the series, each episode manages to find a way to feature one or more of these supporting characters. The result is that you get to know more of them better than in most shows. The style has this ability to trick you into thinking you’ve seen them more than you actually have. Of these supporting players, Christian Navarro stands out from this crowd. He plays Tony. Tony is Clay’s friend and the man responsible for making sure Hannah’s instructions are carried out. I don’t cite him because of any particular performance, but for his talent for showing us a large evolution in the character throughout the series. He makes the most of limited screen time to deliver a strong story arc for his character, and he does it without much of the story’s attention played his way. I think they used to call that upstaging. I just call it a great job.

Many of the young teen actors are appearing in their first screen roles here. Among those who also gave performances that belie that inexperience is Michele Selene Ang as Courtney, the daughter of two dads. Hannah Baker, who has to carry much of the series, is the lead who is not really there. Finally, Steven Silver puts in a performance you wouldn’t expect from a first job. There’s a good chance that the inexperienced cast add a little authenticity to the project.

Finally, I want to address some complaints out there that the show in some way glamorizes suicide. Anyone who really believes that hasn’t seen the show. There isn’t a minute of footage that makes Hannah appear as though she made some kind of “cool” wonderful choice. The series is quite graphic at times and is disturbing to watch. Acts of rape and violence, while not gratuitous in skin, linger uncomfortably long on anguished moments. There are times you will absolutely want to look away. When the series does finally depict Hannah’s act, there is nothing good about it. It’s painful and ugly. Glamorous? Hardly. The show makes me glad I grew up in an age without the internet. Bullies didn’t follow you into your own home. Today there appears to be literally no escape. Kids have to be tougher now than we were. Hopefully those very kids will find inspiration here to reach out. I very much doubt this series will inspire suicide. Now the tapes have been played, and the series is about to retool itself in some ways. I’m actually looking forward to that. The disc contains a few character features and all 13 episodes on four discs. Watch it. What then? “That means you’re about ready for side 2.”

Gino Sassani is a member of the Southeastern Film Critic's Association (SEFCA). He is a film and television critic based in Tampa, Florida. He's also the Senior Editor here at Upcomingdiscs. Gino started reviewing films in the early 1990's as a segment of his local television show Focus. He's an award-winning recording artist for Omega Records. Gino is currently working on his 8th album Merchants & Mercenaries. Gino took over Upcomingdiscs Dec 1, 2008. He works out of a home theater he calls The Reel World. Favorite films: The Godfather, The Godfather Part II, The Body Snatcher (Val Lewton film with Karloff and Lugosi, not the pod people film), Unforgiven, Gladiator, The Lion King, Jaws, Son Of Frankenstein, The Good, The Bad And The Ugly, and Monsters, Inc.
The Teacher The Greatest Showman (UHD Blu-ray) (4K)