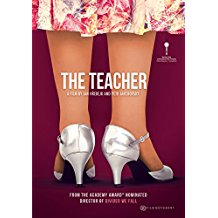 “Did you hear what the teacher wants?”

We’ve all had that especially demanding teacher whose class we quietly dreaded. Yet instead of pushing her students toward academic excellence, the educator at the center of The Teacher is infinitely more interested in what her kids’ parents can do for her. This Czech/Slovak drama hints at some interesting points about compliance. But like a student — or perhaps even a certain movie reviewer — who uses too many flowery words before finally getting to the point…the movie ultimately can’t get out of its own way.

Zuzana Maurery stars as Maria Drazdechova, the new teacher at a suburban Czechoslovakian school in 1983. In addition to taking attendance on the first day of school, Drazdechova asks each of her students what their parents do for work. Turns out Ms. Drazdechova is also a high-ranking chairwoman in the local Communist Party. So when Drazdechova starts asking for seemingly innocent favors from the students’ parents, they are already pretty likely to comply…even if she weren’t also holding their kids’ grades hostage.

As The Teacher progresses, the story focuses on a trio of unfortunate families: Danka (Tamara Fischer) becomes a target when her airport accountant father (Csonger Kassai) expresses ambivalence about sending some food to the USSR on the teacher’s behalf; Filip (Oliver Oswald) catches beatings from his ex-con father (Martin Havelka) for neglecting his wrestling training to focus on school until the older man tries to strong arm the teacher in a more subtle way; and Karol (Richard Labuda) is a quiet boy whose father — single parent Mr. Littman (Peter Bebjak) — becomes a target (and potential, unwitting romantic partner) for the teacher.

“Could someone finally tell us what’s going on?”

The Teacher actually opens with a large group of parents convening at the school for some unknown reason. The film then flashes back to Drazdechova’s first day in class before cutting back and forth to the increasingly heated meeting between the parents and school administration. (Drazdechova herself is conspicuously absent from the latter scenes.) I can appreciate that director Jan Hrebejk and writer Petr Jarchovsky were trying to lend their story an air of mystery early on. However, these early sequences are vague to the point of frustration: all we’re doing is watching a bunch of people we don’t know or care about yet bicker among themselves for reasons that won’t become clear until another hour or so. In the end, these sequences just repeatedly break the flow of the main story.

Where Hrebejk does excel is in establishing a very strong sense of time and place. The early ‘80s setting is conveyed in subtle but effective wardrobe and production design choices. More importantly, this was also a fraught time period in Czechoslovakia, which accounts for the fear of the Communist Party and extreme emphasis on educational attainment: parents always want their kids to have a better life than them, but excelling in school and getting a “good, respectable job” was paramount for the kids in The Teacher.

The movie sort of assumes the viewer has some knowledge of the hold the Communist Party had on the nation at the time, which probably adds to its vagueness for American audiences. The Teacher also isn’t very clear at all on why anyone would ever side with the teacher if all the families are being taken advantage of. (Not surprisingly, a rich a-hole dad is the most vocal defender, but it’s not clear why he’s so adamant about dismissing the other parents’ complaints…other than he’s a rich a-hole, and that’s what they do.)

All the time spent in the tense parent/administrator meeting is especially egregious when you consider that it takes us away from Maurery’s terrific lead performance as Drazdechova. She masters the balance between charming and malevolent; the actress is equally commanding in her interactions with both students and parents without going over the top. Havelka also lends the movie some spark as Filip’s ex-con father; he plays a conventional bully who is at a loss when he meets a different kind of abuser. The younger actors are all fine, but increasingly fade into the background as the focus shifts to their bickering parents.

The movie’s conclusion is a clever bookend to its start, but there are too many unnecessary digressions to get us there. I’m certainly not going to flunk The Teacher, but I feel like some extra after-school work — and some more screen time for the titular character — is in order.