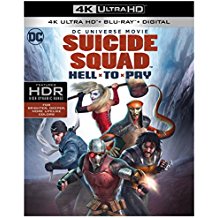 When David Ayer’s Suicide Squad film was released a couple of years ago, the reviews were certainly mixed. One of the biggest complaints from the diehard fans was that Warner opted for a PG-13 version of the film, which took away much of the edge of the material. One only need look at the success of Deadpool to understand that there is a place for a comic film that pushes envelopes and doesn’t shy away from an R rating. It almost appears that the new Warner/DC animated feature film Suicide Squad: Hell To Pay would attempt to make up for that decision. This may very well be an animated “cartoon” film, but it’s a hard-edged R-rated experience that doesn’t shy away from brutality, blood, and violence. But if you’re thinking that maybe this is the film the live-action movie should have been, you are in for a disappointment of the epic kind.

The film begins with a bloodbath before the title credits even roll. A squad of Tobias Whale (Fennoy), Count Vertigo (Pirri), Punch (Devall) and Quinn lookalike Jewlee (Nathanson) are betrayed on a mission and graphically slaughtered. What was their mission, and what were they after? Amanda Waller (Williams) quickly puts together an A-team of criminals to follow up. In this film the team is made up of Deadshot, voiced by a badly-cast Christian Slater, Harley Quinn, voiced by Tara Strong, who has the unenviable job of following Margot Robbie’s performance, Flash rouge Captain Boomerang, voiced by Spartacus himself, Liam McIntyre, Killer Frost, voiced by Kristin Bauer van Straten, Copperhead, mostly slithered by Gideon Emery, and Bronze Tiger, voiced by Billy Brown. They are sent after an object sought by a few bad guys, most notably the not-so-immortal Vandal Savage, voiced by Jim Pirri. The object is where the film wastes its violent mayhem. The object of such desire is literally a “Get Out Of Hell Free” Card. Yeah, that’s what I said. It’s a card that says “Get Out Of Hell Free” on its surface. The idea is that anyone who dies in possession of said card gets to bypass the eternal flames and head directly to the Pearly Gates. It can only be used once, and in the film’s final crimson massacre, a few characters attempt to meet their end with the card.

Look. I’m one of those folks who wanted to see an R-rated Suicide Squad from the beginning. And I was one of the first to root for this animated apology from DC to be everything that film wasn’t. What I got instead was a film that merely exhibited the violence for its own sake and found a way to turn some of the most interesting comic characters into sleepy time for this reviewer. It’s pretty bad when an 80-minute runtime feels like an eternity, but that’s exactly what I felt watching this film. From beginning to end, it weaves a convoluted tale that really doesn’t track on any level. Most of the voices are terribly miscast, and the movie never did come together for me.

There are also too many characters here and too many subplots that don’t get enough time to play out in a satisfying way. It all seemed pretty rushed to me, and perhaps that’s exactly what happened. What surprises me is that it was written by Alan Burnett, who has penned some awesome DC material over the years. If anyone should understand what it takes to make these characters click, I would have suspected it was him. The man has been working in the DC Universe for 30 years and has been a part of most of the exceptional animated features and series events the genre has seen. I suspect he won’t consider this some of his best work. He knows he can do much better, and so do I.

Suicide Squad: Hell To Pay is presented in an aspect ratio of 1.78:1. The ultra-high-definition 2160p image is arrived at by an HEVC codec with an average bitrate of 55 mbps. While I did not enjoy the film for the traditional reasons, there is a lot to love about this ultra-high-definition image presentations. There’s a rather well-defined style here that relies on strong contrast and black levels. Much of the animation is covered in shadows, and that’s particularly true of characters’ faces. While a lot of expected detail remains “hidden” to a large extent, the effect allows for some rather nice atmosphere. There are also quite a few instances of lighting effects in the animation that really allow the HDR elements to shine.

The DTS MA – HD 5.1 presentation isn’t quite as impressive. There’s not a lot of surround work here, and the audio presentation acts almost exclusively to serve the dialog. You don’t get any kind of oomph from the subs, and with this much carnage, there was certainly a lot of need to push those bottom levels to the max. The entire audio is too much like an old television cartoon and leaves too much for the imagination.

Sneak Peak At DCU’s Next Animated Movie – The Death Of Superman: (7:06) This is pretty much an extended trailer for the next film, which looks a lot better than the one I just saw.

The Power Of Plot Devices, Macguffin And Red Herrings: (10:30) This is a disappointing feature that might explain how things went so horribly wrong. Even the production crew can’t seem to agree on what these terms mean, particularly the Macguffin. That certainly explains why this film has such a weak example of the device.

There are a few short character features.

I have been mostly enthusiastic about DC’s willingness to do so many of these animated features. I understand that they live in a corner of that universe that is different from both the outstanding television DC landscape and the mostly disappointing cinematic world. I am eager for what follows and hope this was merely a speed bump along the way. I’d tell you more about this film but honestly? “Bored now.“

Gino Sassani is a member of the Southeastern Film Critic's Association (SEFCA). He is a film and television critic based in Tampa, Florida. He's also the Senior Editor here at Upcomingdiscs. Gino started reviewing films in the early 1990's as a segment of his local television show Focus. He's an award-winning recording artist for Omega Records. Gino is currently working on his 8th album Merchants & Mercenaries. Gino took over Upcomingdiscs Dec 1, 2008. He works out of a home theater he calls The Reel World. Favorite films: The Godfather, The Godfather Part II, The Body Snatcher (Val Lewton film with Karloff and Lugosi, not the pod people film), Unforgiven, Gladiator, The Lion King, Jaws, Son Of Frankenstein, The Good, The Bad And The Ugly, and Monsters, Inc.
The Americans: The Complete Fifth Season Chappaquiddick