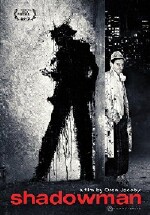 Often times, biographical documentaries are release posthumously, essentially immortalizing the spirit of the subject. In the case of Shadowman, street artist Richard Hambleton remained alive to be featured in the documentary and see his work be shared at a number of festivals before his death in October of 2017. Now, thanks to Storyville Films, you can take a look at the life and work of Richard Hambleton, as he emerges from the shadows – so to speak. Quite figuratively working in the shadows of other giants such as Andy Warhol, Keith Haring, and Jean-Michel Basquiat, Richard Hambleton is quite the understated artist. This documentary explores his life and his art, and more importantly, how the two communicate with one another.

Perhaps the most fascinating aspect of this documentary is the way in which we actually get to see footage of Hambleton working on his pieces, and just the pieces themselves. Every bit of his art is awe inspiring, so much so that it looks unbelievable. That is, until you see him do it right in front of you. One of the most breath-taking sequences shown in this documentary features Hambleton being filmed by someone at night, creating one of his famous “shadowmen” on the side of a wall in New York. The swiftness and accuracy of getting this piece to completion is astounding. Unfortunately, this was the only known clip of him creating one of these figures, so the documentary uses it more than once. While it is fun to watch, the way in which they use it the second time seems more like a lazy bit of “filler footage” rather than something that carried weight in the rhetoric of the film.

Aside from the “shadowmen” that Hambleton is most known for, you learn about the works that preceded and succeeded that era of his art. The first is most closely related series was his “murder victim” series, still street art, where he simply just drew the police chalk outlines of murder victims out in public, and at times, added red paint for blood. These were placed in very public places, such as the steps of a building that have a lot of foot traffic. There is something about an implied bout of violence within a public sphere that is very arresting: it makes passersby stop and think, which is the exact intention of Hambleton. The era of art he began after his “shadowmen” are beautiful seascapes, that seem to be criminally underrated by critics and fans alike. They are large canvases (figure 5’ x 5’ or a little bigger) and they are just gorgeous splashes of color, depicting the fluidity of water with very life-like waves. The documentary ties these amazing pieces into his struggle with addiction and the different drugs affected the different themes of each painting. While it is an interesting connection, I largely feel that the connection itself really undermines the meaning that you are able to take away from each piece as a spectator.

Overall, it is a great biographical documentary. It is worth sitting through the entire piece just to watch him create one of his “shadowmen” with ease, even if that scene does go by really quickly. No matter how great documentaries are, I always believe there is a way to make the film by letting your subject speak for themselves. Shadowman does allow Hambleton space to breathe, but I would have like to be given more freedom to interpret the man’s work on my own, rather than through others. Not to say that the information wasn’t valuable, but I think the film would be much stronger if there were more moments where they just let Hambleton’s work sit, devoid of someone else’s verbal interpretation.