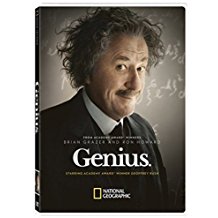 “It’s not hard to go from genius to laughingstock.”

Close your eyes and imagine someone just said the word “genius” to you. (And also pretend like you can’t see the familiar, wild-haired figure on the DVD cover art that accompanies this review.) What person comes to mind when you hear that word? I’m willing to bet it’s Albert Einstein, the German-born Jewish theoretical physicist who developed the theory of relativity. That’s what makes Einstein the perfect inaugural subject for Genius, National Geographic’s anthology series that also doubles as the cable channel’s first stab at scripted drama.

“You step on enough toes and I promise you, one day you will trip.”

Genius follows the life of Albert Einstein from his days as an exhaustingly curious student at Zurich Polytechnic during the late 19th century to his later, still exhaustingly curious days as the world’s most famous scientist. Geoffrey Rush plays the older, more familiar version of Einstein as he wrestles with past mistakes and tries his best to avoid the damaging effects of World War II. But it’s South African/British actor Johnny Flynn who surprisingly gets just as much (if not more) screen time as the younger Einstein falls in love with physics…and various women.

“The price we pay for being married to men with brilliant minds.”

Those women include Mileva Maric (Samantha Colley), a Serbian mathematician who is Einstein’s intellectual equal at Zurich Polytechnic. In later years, there’s also Elsa Einstein (Emily Watson), a more pragmatic partner for Albert’s all-encompassing genius and his second wife. (Not to mention his first cousin!)

With more content on the small screen than ever, you’ve probably noticed that limited series and anthologies have become all the rage. It’s great for viewers, who only have to commit to a show 8 to 10 episodes at a time instead of worrying about having to catch up on several seasons’ worth of story. Meanwhile, networks and showrunners get to go to an Oscar winner like Rush and say, “Hey, come play Einstein for a few months and then you can go back to making movies.”

The anthology format is a particularly excellent fit for what Genius wants to do, which is to tell the life stories of brilliant humans. Usually, this sort of story is reserved for an Oscar-bait biopic that inevitably leaves out or skims over a bunch of important details. In short, stretching the life story of Albert Einstein to 10 episodes makes much more sense than trying to tell it in a two-hour movie.

That being said, Genius — which is based on Walter Isaacson’s 2007 book, “Einstein: His Life and Universe” — still feels a little baggy around the middle. Despite the fact that Rush’s smirking face is used to sell the show, the actor doesn’t appear at all in half this series — Eps. 2-6 — after making a playful debut in Ep. 1. That means Flynn — who acquits himself quite well — is left to shoulder a lot of the load in crafting an Einstein character viewers can connect with. While it’s fun watching Einstein challenge his professors (and the scientific establishment as a whole), the episodes often linger a bit too long on the soap opera trappings of Einstein’s failures as a husband and a father.

By the time Rush comes back around as Einstein, the series has already burned through most of the juicy material. Still, Rush manages to shine, particularly during the interview scenes that have Einstein sparring with American Counsel Raymond Geist (Vincent Kartheiser) in order to secure entry into the U.S. as the Nazi Party rises in Germany. The actor even maintains a twinkle in his eye during the final episode, which chronicles the bittersweet end of Einstein’s life.

Genius counts Brian Glazer and Ron Howard — who won Oscars for producing and directing A Beautiful Mind, respectively — among its executive producers. Howard also directed the first episode of Genius and brought some of the same nimble, visual tricks he used in A Beautiful Mind to illustrate the way a brilliant man thinks and sees the world. On the other hand, the writing in Genius can often range from clunky (“People are not molecules!”) to repetitive and painfully on-the-nose (“For a man who is an expert on the universe, you don’t know the first thing about people, do you?”)

Although the first season heavily focuses on Einstein, he’s not the only genius of note. Colley is a revelation as the strong-willed Mileva. (Conversely, I was surprised by how little Watson got to do as Einstein’s second wife.) There are other Hall of Fame scientific names that turn up here as characters, such as Max Planck, Niels Bohr, Marie Curie, and Werner Heisenberg. Phillipp Lenard (Michael McElhatton), the German nationalist/anti-Semitic physicist, is the closest thing this series has to a villain. However, Lenard and Einstein don’t really come face-to-face, which robs that conflict of some spark.

Genius: Season 1 — Einstein features all 10 episodes on four discs. Disc 4 also includes all of the bonus material on this DVD set: the featurettes you get are “Meet the Characters,” “Einstein’s Love Life,” “Einstein’s Escape from Hitler,” “The Making of Genius,” “Behind the Scenes with Ron Howard and Brian Grazer,” “Behind the Scenes with the Cast,” “Costume and Makeup,” “What Does ‘Genius’ Mean,” and “Two Einsteins.”

Season 2, which stars Antonio Banderas and focuses on Pablo Picasso, is currently airing on Nat Geo. (This first season of Genius featured a brief mention of Picasso, which was a fun, Easter egg-y way to set up season two.) Genius has also already been renewed for a third season that will focus on “Frankenstein” author Mary Shelley. Einstein was a bit long and repetitive at parts, but overall quite well-done. More importantly, Nat Geo has found a format and formula that could serve the channel well for years down the line.