Posted in: Disc Reviews by Jeremy Butler on May 4th, 2018 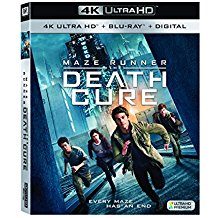 For Dylan O’Brien, it just seems like his start just keeps getting bigger and bigger. Going from the awkward best friend on MTV’s Teen Wolf to becoming a leading man on the silver screen, he has shown charm and charisma normally only seen in veterans. Another great way a star distinguishes himself is to get attached to a franchise, something he has done with the Maze Runner trilogy. Of course, Maze Runner: The Death Cure spells the end of that run; given his performance in the film, it does not spell the end to his rise. An entertaining and engaging conclusion to the franchise, Maze Runner: The Death Cure follows former glader turned revolutionary Thomas as he continues his battle against his former employers WCKD, the corporation that is exploiting children in order to utilize their immunity to the Flare, a virus that has caused dystopian society. Filled with action and infused with heart, the film is possibly the first book adaptation that guys will be able to get behind.

Following the events of Maze Runner: The Scorch Trials, Thomas is betrayed by Teresa (Kaya Scodelario), the person he trusted most in the world, and begins working with revolutionary group, the Right Arm. Teresa’s betrayal also resulted in the capture of Thomas’ friend Minho (Ki Hong Lee). Partnering with fellow Maze survivors, Newt (Thomas Brodie-Sangster) and Frypan (Dexter Darden), Thomas sets out to recover Minho from WCKD’s stronghold, the last known city in existence. Gaining entry to the city’s fortified walls will be a challenge in itself, and the group will be forced to rely on a familiar face that they don’t completely trust. Time is of the essence as they attempt to reach Minho before WCKD’s experiments leave him a shell of himself. On the other side of the wall, Teresa deals with the consequences of her choices and finds her resolve shaken as she is forced to question if she chose the right side.

I have followed this franchise from the very beginning, and it has never disappointed; Maze Runner: The Death Cure is no exception and serves as one of the best conclusions to a book adaptation that I have witnessed. As I said earlier, this is a series that I am confident that guys can appreciate. The action starts from the opening credits with a pulse-pounding train heist and just continues to climb with every action sequence. The cast chemistry as well as their individual performances was a huge selling point for me, particularly Kaya Scodelario. Despite her choices, her faith that she made the right choice and her resolve make it nearly impossible to hate her. Trust me, after the events of the previous film, I came into this one ready to hate her. However, in her monologue shortly after her opening scene where she makes it clear that her only desire is to find a cure for the Flare virus and not to mention when she went to Minho to explain her choices, you actually end up trying to see her side of things.

I really can’t say enough about the cast, especially Thomas Brodie-Sangster as Newt, who without question has the largest character arc of the film. In the first film, Newt didn’t really seem like a central character, but in this conclusion you will come to recognize him as the person who humanizes the others; the very heart of the team. Also a familiar face will return in hopes of redeeming himself, but I’m not going to give anything away.

Maze Runner: Death Cure is presented in an aspect ratio of 2.39:1. The ultra-high-definition 2160p  image is arrived at by an HEVC codec with an average bitrate of 65 mbps. When you consider the 2K original material, this is a pretty fine ultra-high-definition image presentation. There’s a ton of depth that adds both an atmospheric and 3- dimensional feel to the entire look. The HDR allows for some nice pinpoint lighting effects against a mostly nice dark background. Yes, the black levels are quite strong and dance quite nicely with the bright moments. Colors pop in the few instances that they are allowed to dominate the sterile and cold style of the presentation. Oranges are particularly nice here, from the early exteriors to some nice highlights in the city environments. There is a lot to love about the film’s textures. The city also delivers wonderfully clean lines and seamless effect transition. It’s within the city elements that the sharp detail truly comes into focus.

The Dolby Atmos presentation defaults to a rather immersive 7.1 track. The opening train sequence delivers some wonderfully aggressive surrounds that place you squarely in the action. Add the futuristic flying machines and plenty of firefights, and you get a complete audio presentation. The score can be dominant without ever walking on the rest of the audio. Dialog punches through, and there’s a careful attention to detail placed in the various audio placements. Subs come to life often and add a nice dynamic fill to it all.

Deleted/Extended Scenes (27:55): Didn’t get enough of the movie? Well, you are in luck, because this feature is chalked full of additional and extended scenes. I have always been a sucker for additional content, so for me this is definitely worth watching.

Unlocking the Cure (21:40): A behind-the-scenes featurette that highlights the journey to the stories conclusion all the way from the first film (Maze Runner). Intercut with interviews from the cast as they talk about their experience with the film.

Going Out on Top (04:33): An in-depth look at the opening train action sequence which kick started the movie. This sequence was one of the best starts to a movie that I’ve seen in a while, and it was great to see how it was put together.

Gag Reel (11:37): The name is pretty self-explanatory, but like Dylan O’Brien said. “You always need a blooper.”

Visual Effects Breakdown (16:50): A split-screen featurette showcases the importance of the visual effects department to the overall process. If you are curious about filmmaking, this is the feature for you.

Visual Effect Reel (11:20): A running sequence that again helps display the visual artistry at work in this film.

I will say that it was slightly difficult in the beginning to get my bearings given the nearly three-year gap between this film and the previous one. Coming into the film, I barely remembered where things had left off. In the film’s the defense, O’Brien was injured during the course of film, which caused production to be halted for a time. Once I got past the initial disorientation, the story flowed at a very natural and even tempo. The ending began to feel a little rushed as several circumstances seem to be occurring simultaneously, but all in all I was able to follow without much difficulty.

Jeremy Butler is a film school graduate of the International Academy of Design and Technology. He is been writing for Upcomingdiscs since 2012; however, movies have played a big part of his life for much longer. Favorite genres include horror, science fiction/fantasy, and comedy. Favorite movies are V for Vendetta, Boondocks Saints, Kiss Kiss Bang Bang, and The Godfather.
Shadowman Lean On Pete