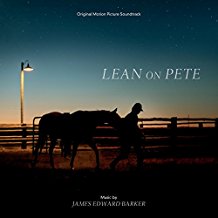 “Goodtime Charlie’s got the blues.”

Every once and again a film comes along that you can’t quite find the right label to describe. It doesn’t want to fit in any particular genre or category. Andrew Haigh appears to be the kind of director who thrives on that kind of a film. He received a well-deserved Oscar nomination for 45 Years, and while I don’t expect there will be any Oscar notice for Lean On Pete, it’s the kind of film that deserves more attention than it’s likely to get, including at the box office. When I first saw Lean On Pete at a press screening, it was anticipated to open earlier and wider than what has actually come to pass. In an already crowded early summer blockbuster season, I can understand the trepidation that your local Cineplex might have taking up screens for such a small marvel when there are literally larger Marvels eating up box office dollars. My hope is that the film will find an audience even among the blockbuster crowd. After all, as good as dessert tastes, there are some yummy nutritious items to be found in the cinematic ala carte of the spring/summer season. Lean On Pete is just such a film and worth the time to make what will be an extra effort to see it. If you’re in Tampa, you should check it out at the newly renovated Tampa Theatre, where you can revel in a one-of-a-kind, nearly-100-year-old theater experience and take in a warm film that serves as a wonderful balance to the action most of us are anticipating over the next few months. Bon appetit.

Charlie, played by Charlie Plummer, is a pretty nice character study of a lad. He lives with his single father, who doesn’t really have the physical or emotional strength to really be there for his son. When he’s nearly beaten to death by a jealous boyfriend of a woman he brought home to bed, Charlie finds he must rely on himself. He gets his release by running. His course takes him past a small horse racetrack, where he meets Del (Buscemi) who is a small-time horse owner who isn’t above a little cheating to win a few bucks in the small circuit. Charlie gets a job helping him for the day, which turns into a kind of permanent gig as Del takes him to his ranch some distance away and eventually to the races. Del’s a bit grumpy but has a soft spot for the kid that he tries hard to hide. As Charlie’s father gets worse in the hospital, working for Del is the only way to keep food on the table, and it becomes his escape. And that’s where he meets one of Del’s horses, a scrappy little character named Lean On Pete, hence the film title.

Charlie bonds with the horse, but Del is famous for using up cheap horses for as long as he can, and when they burn out, he sells them to a Mexican slaughterhouse. Charlie can’t stand the thought of Lean On Pete being killed. He sets out to save the horse by stealing him and making their way across country to find an aunt of his whom he hopes will take them both in. Their journey takes up a large portion of the middle of the film. They encounter a few strange characters along the way. What ends up happening would be too much of a spoiler, but I will say that the film hits a major story point quite a bit before the end of the movie. It’s a stark and rather bold and unexpected turn of events, and it’s a powerful moment. Unfortunately, the film loses its momentum and charm from here on out.

Truth be told, the story isn’t what makes this film what it is. Haigh has a way of bringing you into these intimate portrayals of these characters. It is these performances and the way Haigh captures them that makes this such an intriguing film. Charlie Plummer allows himself to get carried away with the film’s events. He doesn’t put on a terribly heavy performance, and that ends up being a smart choice. He falls naturally into the role, and it’s too easy to forget he’s an actor. Of course, Steve Buscemi is as good as he’s always been. Del is a more nuanced character than some of his more famous recent roles, and he pulls it off. Del’s not really a good guy, but Buscemi endows him with incredible charm. There’s some real natural chemistry between the two actors, and you’ll find yourself wishing they had shared even more screen time. Haigh appears to be particularly good at capturing these kinds of character moments, and they are absolutely the backbone of his work.

Lean On Pete is a simple film in many ways. The Americana portrayed in the cinematography is almost like something out of a Mayberry poster. The film is also a great moral lesson about good intentions and unintended consequences. It’s actually a rare combination in film, and it’s refreshing to see it so starkly played out here. It won’t make any real money, and you will have to work to see it. But in an age of f/x saturation, a film like this doesn’t come around often. Yeah, I love those films. And I’m there to watch them just like millions of others. But how often can you feed yourself strictly dessert? “There’s only so many times.”

Gino Sassani is a member of the Southeastern Film Critic's Association (SEFCA). He is a film and television critic based in Tampa, Florida. He's also the Senior Editor here at Upcomingdiscs. Gino started reviewing films in the early 1990's as a segment of his local television show Focus. He's an award-winning recording artist for Omega Records. Gino is currently working on his 8th album Merchants & Mercenaries. Gino took over Upcomingdiscs Dec 1, 2008. He works out of a home theater he calls The Reel World. Favorite films: The Godfather, The Godfather Part II, The Body Snatcher (Val Lewton film with Karloff and Lugosi, not the pod people film), Unforgiven, Gladiator, The Lion King, Jaws, Son Of Frankenstein, The Good, The Bad And The Ugly, and Monsters, Inc.
Maze Runner: The Death Cure (UHD Blu-ray) (4K) Followers