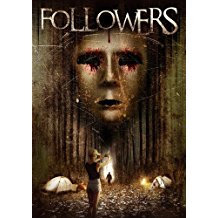 I can’t be the only one who is a little relieved that Hollywood has finally decided to stop churning out found-footage films.  This is not me saying I have anything against the genre; when it is well done, the end result is something I will happily consume and enjoy re-watching.  The first Paranormal Activity and The Blair Witch Project are the films that shine, because they gave us a familiar story but presented it to the audience in a way we haven’t seen before.  There have been several successful found-footage films, but only a few that I feel will stand the test of time (at least in film history amongst geeks), and Followers is surprisingly a film I’d rank high on that list.  This isn’t some endorsement because it was made basically in our hometown, but the film manages to utilize the familiar concept and flip it in a way that is not only unique but is relevant to today’s culture that is obsessed with social media.

The film’s opening scene is one of my only major complaints, where it gives too much away as we see a jogger Facetiming her friend and suddenly attacked.  In most horror films, getting that opening stinger to get the audience’s heart pumping is usually a good thing, but here I feel it takes away from the slow-burn effect the film has on the audience.  We now know to anticipate someone being in the woods, which I understand could be their intention to help create a sense of dread … but we are going into this knowing it’s a horror film; the dread is already in place.

Forgetting about the opening few minutes, the film takes us on a journey as we follow *wink wink* Brooke (Amanda Delaney) and Caleb (Justin Maina), a pair of social media celebrities who tend to document everything in their day-to-day lives.  The duo is going on a hiking trip for their anniversary, and it’s on this trip Caleb is planning a big surprise.  The front portion of this film can get to feel a little tedious, and the couple is to a point not all that likeable, but if you hang in there, at around the 30-minute point of the film, there is a nice payoff.  It’s when we are introduced to a pair of documentary filmmakers who have their own agenda that involves Brooke and Caleb.  I don’t want to spoil much about these guys, but their introduction changes the film in such a way that it genuinely had me wondering where this film was going, and for once in a found-footage film I was completely hooked.  As the film continues to play out there are a few more surprises, and the end result has me rooting for this little film.

The film is directed by Ryan Justice. I don’t expect anyone to be familiar with his name, but with Followers he gives me a little hope that he has a unique vision that stands out from what we’re used to seeing in the Hollywood blockbuster.  While the found-footage and use of social media is definitely a style that is hard to defend as art in the film medium, it’s the well-crafted story that genuinely holds this film together, which is something that we don’t get much in this sub-genre.  It feels natural as we see the characters interact with their environments and one another.

The film’s weakness comes from not having the most seasoned performers in the film.  While the acting is well above average when looking at other ultra-low-budget films, when you look at it in relation to other successful films in the genre, the performances just don’t reach where they need to be.  But to be fair, you have to start somewhere, and you don’t watch this genre of film and expect to see award-winning performances.  The film sets out to show you a good time and also works as a not so friendly PSA about the dangers of broadcasting your life on social media.  I really enjoyed this; if you’re a fan of the found-footage genre, then I believe you’ll enjoy the ride as well.  For those who can’t stand the genre and complain about shaky-cam, well, this film is something you may want to steer clear of, though it may surprise you.

Brent Lorentson is a horror writer and film critic based out of Tampa, Florida. With a BA in Digital Film, he co-wrote and co-directed Scavenger Hunt. His short stories have appeared in various horror anthologies. In 2019 his short script Fertile Blood will be a part of the anthology horror film Slumber Party. He is currently working on his first novel A Dark and Secret Place set to be released in late 2019. Favorite Films: Taxi Driver, Fight Club, I Saw the Devil, The Wild Bunch, Dawn of the Dead, A Clockwork Orange, Pulp Fiction, Heathers, The Monster Squad, and High Fidelity.
Lean On Pete Fifty Shades Freed (UHD Blu-ray) (4K)