Posted in: Disc Reviews by Jeremy Butler on May 8th, 2018 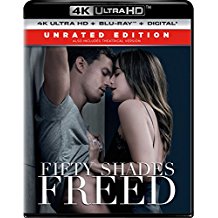 The world’s most erotic novel series is coming to an end with the release of the final chapter, 50 Shades Freed. Dakota Johnson and Jamie Dornan reprise their roles as Anastasia Steele and Christian Grey, as the pair enters wedded bliss. Their romance has been a whirlwind, going from meeting to marriage in what seems to be less than six months. However, when it’s right, it’s right; besides, it’s rare that you find someone with the same taste, if you know what I mean. Naturally, happily ever after won’t come as easily, as our couple will have to face an old enemy and a new challenge that could threaten to tear the two of them apart.

The story wastes no time getting to the moment that the audience was waiting for, as we encounter the pair on their wedding day, exchanging their vows. From there, it is jet-setting across the world in what has to be the world’s most expensive honeymoon. However, their fairy-tale ending is still a long way off as Ana and Christian receive news that her former boss and predator, Jack Hyde (Eric Johnson), has broken into Grey Enterprises and set off an explosive. Christian is forced to reveal to Ana that Hyde appears to be obsessed with the Grey family and has been targeting them.

Despite the threat that Hyde poses, their relationship continues at a steady pace, as the two learn to compromise and accept each other’s needs, including frequent trips to the Red Room as well as other more public surroundings. For Ana, her life, both personally and professionally, is everything that she could possibly have imagined and more. It is then that she receives the most life-changing news that anyone can ever receive; something that will not only change her life but also alter the fate of her relationship with Christian forever.

Fans of the book series will surely be satisfied with this conclusion to the film series, as I believe it closely mirrors the events of the novel. Die-hard fans will also love Ana’s new attitude in this film, as she fully embraces her confidence as well as her position at her Christian’s side. Dakota Johnson excels as the former shy girl who now takes no crap from anyone, as evident in her scene with Gia Matteo (Arielle Kebbel), where she doesn’t hesitate to put the woman in her place for flirting with Christian. Speaking of Christian, the audience will also notice the power dynamic shift in this film. The role started to change in the last film with Christian realizing that despite them being incompatible in the Dominant-Submissive relationship, in this film it is very clear who is in charge. That is not to say that Christian is fully accepting of this change, and there will be plenty of friction, which makes for entertaining scenes as well as leading to trips to everyone’s favorite room.

I found the film to be entertaining, albeit predictable in some areas. Dakota Johnson without question is the selling point for the film. Her chemistry with her co-star, Jamie Dornan, is an important factor as well, but Johnson shows a level of confidence and strength that will have you question how she was ever able to even act as a submissive. Granted, she was not good at being submissive, and she continues to be defiant this time around, even being as so bold to say when questioned about her defiance, “Learn to live with it.”

The story unfolds in an even fashion with the threat of Jack Hyde driving the plot forward. Johnson is very fitting in his role of the egomaniacal sexual deviant. Kudos to the makeup department for the strung-out look that they applied to the character, which helped to show just how far he has fallen.  His genius seemed just a bit over-exaggerated to me until we discovered that he attended Stanford on scholarship. Additionally, his grudge against the Grey family seemed out of place. I mean, understood he wanted to get back at Ana for his perceived slights, but other than that, he appeared to be more focused on making Christian pay. Fortunately, an explanation for his obsession is provided for us non-readers of the book.

Fifty Shades Freed is presented in an aspect ratio of 2.40:1. The ultra-high-definition 2160p  image is arrived at by an HEVC codec with an average bitrate well into the 70’s mbps. There’s a ton of detail to be found in this ultra-high-definition image presentation. Textures win out over colors. The film doesn’t make a lot of use of bright colors other than red. It’s the texture of costumes and linens that add a degree of detail to the film. Black levels are quite remarkably deep with excellent shadow definition. Again this is an upscaled presentation from a 2K shoot. Some of the few bright moments come from the establishment shots of the European honeymoon. There are wonderful colors to be found here in contrast to the remainder of the film. No question that the HDR presentation provides a significant level of detail and depth over the Blu-ray. There’s an atmosphere to these films that benefit greatly from the 4K upgrade.

The DTS:X defaults to a comfortable 7.1 track. It is the pop songs that gain the most from this audio presentation. The songs spread out over the surround mix with a lot of back vocals showing up in the rear surrounds. The subs are never aggressive but provide just a nice soft touch of depth to the mix. Dialog is always perfectly placed and easily heard. The sports car adds a bit of zoom to the sound, and that is where the film is the most immersive. The audio also works quite well when the music and surrounds are subdued. Quiet has a place here, and it’s nice to see it used so generously.

Deleted Scenes (01:08): A sixty-second sequence that didn’t make it to the final cut. I love extra content, but this scene didn’t do anything extra for me.

The Final Climax (32:39): Nine behind-the-scenes featurettes which discuss several prominent scenes featured in the film. These features are told mainly from the production team that helped create the world that we are viewing.

Christian and Ana by Jamie and Dakota (06:02): Actors Dakota Johnson and Jamie Dornan talk about the characters they have played over three movies, providing insight into characters that have become an extension of themselves. Also, the added benefit of hearing from the author of all three books.

A Conversation with EL Jams and Eric Johnson (08:52): Eric Johnson, who plays the film’s antagonist Jack Hyde, and novelist EL James interview one another. The best of the features in my opinion.

“Heaven” Music Video (03:26): I would attribute this music video as the official theme song for this installment in the franchise. However, it would have been more effective to have Jamie Dornan as the shirtless man in order to tie it back to the movie.

“Capital Letters” Music Videos (03:51): Hailee Steinfield puts on a good show, but it is hard to relate to the actual movie, as there are no scenes from the actual movie in the video. There are similar settings, so I suppose you can view it as an homage.

“For You” Music Video (04:15): Mia Grey didn’t get a lot of screen time in this franchise, but with this movie she makes a healthy contribution to the film with this song, which also served as the theme song for honeymoon sequence.

Hardcore fans will be satisfied with how the story ends. And the suspense of knowing whether or not Ana and Christian get their fairy tale ending will bring in even more people.

Jeremy Butler is a film school graduate of the International Academy of Design and Technology. He is been writing for Upcomingdiscs since 2012; however, movies have played a big part of his life for much longer. Favorite genres include horror, science fiction/fantasy, and comedy. Favorite movies are V for Vendetta, Boondocks Saints, Kiss Kiss Bang Bang, and The Godfather.
Followers Rock & Roll Hall of Fame: In Concert