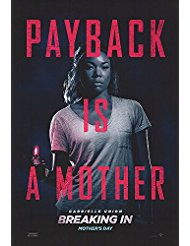 It’s an actioner with good special effects, and the setting for the flick is outstanding, but Breaking In is just another robbery-gone-bad film at the hands of a very upset mother.  Much like Kidnap where Halle Berry goes berserk because her son gets taken when her car is stolen, here Gabrielle Union turns into a determined killer mom to get her children free from robbers. Unfortunately there’ve been several movies with a similar plot, but in case you haven’t seen one, this movie should keep you on your toes.

Due to the recent death of her estranged father, Shaun Russell (Gabrielle Union) gathers up her children Jasmine (Ajiona Alexus), a teen, and Glover (Seth Carr), a pre-teen, and heads for his plush estate in the mountains. They are given the task of clearing the estate of any important objects and papers before the real estate company takes over the sale of the property. When they arrive, Shaun finds the sophisticated security system has been tampered with, but since the house is on the market, she passes it off as a real estate thing.

After getting settled in with the kids doing what they do best, lazing around, Shaun goes outside and notices the garage door is open.  Realizing they are not alone, she enters the house and gets accosted by one of the four robbers.  So begins a tale of holding hostages, while robbers Eddie (Billy Burke), Duncan (Richard Cabral), Sam (Levi Meaden) and Peter (Mark Furze) look for a safe with supposedly millions of dollars stashed inside.

While Gabrielle Union does not have the ferocity of Halle Berry’s performance in Kidnap, she sure comes across as a tough cookie. Here she shows Shaun can take a lot of punishment and still come back for more.  You can see her character change as the movie progresses, going from a soft side in the beginning as she deals with her children prior and during the trip.  But then, when the going gets tough, Shaun takes command of the situation, displaying her maternal instinct to protect her young no matter how dire the situation. This is not her first outing playing a tough character as she did in The Box, but it sure is more of a dramatic one.

Billy Burke’s performance as the leader of the four robbers does make me wonder what Director James McTeigue was thinking when it comes to having him turn his Eddie into a namby-pamby.  A nonchalant robber, Eddie just doesn’t look bad enough to be wrapped up in the job.  Often easygoing rather than a threatening person, it takes away the thriller value of the film.

I actually think the film should be rated R, as the slashing and stabbing scenes are very realistic, even though some of them are masked by camera angles. It’s an OK movie, but not high on my terror list. Be cautious when deciding to allow immature children to see the film, as it does have some scenes that are inappropriate for youngsters.

John Delia has been on all sides of the movie business from publicity, writing for publications and on line blogs, script writing, to film making. Writer, critic, film editor he has worked as a film critic on this second go around for 14 years. He earned his Bachelor’s degree at the college of Journalism and Communications at the University of Florida in Gainesville, Florida. John is an active member of the Southeastern Film Critics Association (SEFCA) . Favorite Films: Lord of the Rings/Hobbit trilogies, The Godfather trilogy, the Indiana Jones trilogy (I didn't like the 4th), The Avengers and for TV it's Game of Thrones. As for animation it's a tie between anything Pixar and everything Hayao Miyazaki.
Black Panther Contest: Win Rowan and Martin’s Laugh-In: The Complete Fourth Season From Time-Life