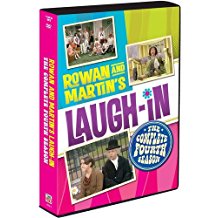 Few television shows have had as much influence on the pop culture as did Rowan & Martin’s Laugh-In. The brainchild of George Schlatter the series has left behind a rich legacy. Even if you’ve never seen an episode of Laugh-In, you’ve heard the catch-phrases, or you’ve watched another show that was directly influenced by it. Now you don’t have to live the show through memories. Our great pals over at Time-Life have given us a copy of Laugh-In The Complete fourth Season on DVD to giveaway. This is your chance to own some classic moments in television history.

Gino Sassani is a member of the Southeastern Film Critic's Association (SEFCA). He is a film and television critic based in Tampa, Florida. He's also the Senior Editor here at Upcomingdiscs. Gino started reviewing films in the early 1990's as a segment of his local television show Focus. He's an award-winning recording artist for Omega Records. Gino is currently working on his 8th album Merchants & Mercenaries. Gino took over Upcomingdiscs Dec 1, 2008. He works out of a home theater he calls The Reel World. Favorite films: The Godfather, The Godfather Part II, The Body Snatcher (Val Lewton film with Karloff and Lugosi, not the pod people film), Unforgiven, Gladiator, The Lion King, Jaws, Son Of Frankenstein, The Good, The Bad And The Ugly, and Monsters, Inc.
Breaking In Braveheart (UHD Blu-ray) (4K)