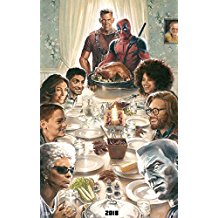 “So dark. You sure you’re not from the DC universe?”

I’ve said many times in these pages that expectations can kill. That might have been more true for Deadpool 2 than any other film I’ve seen since the re-launch of Star Wars. The first movie didn’t push boundaries. It obliterated the boundaries and kept on going. Fans had certainly been ripe for a raunchy R-rated superhero film, and the box office for Deadpool certainly proved that out by bringing in nearly a half a billion bucks. For a superhero film that might seem like small change, but for what was essentially a comedy, it was awesome money and demanded a sequel before the first run was over at the multiplexes. The problem is that raunchy comedies, like superhero films, share the deadly expectation curse. Rarely does a comedy film sequel live up to those expectations, and if you’re anybody but Marvel, it doesn’t happen often in the superhero genre either. If all of this sounds like it’s leading up to a death knell for Deadpool 2, you’re right. It does sound that way. Fortunately for us Deadpool 2 manages to escape its fated demise and not only work as well as the first film; Deadpool 2 is better.

The problem with the first film was that there wasn’t much of a plot going on. It served as a kind of origin story for the character and appeared to be pretty much flying by the seat of its pants. The film’s creative team had the right instincts then. No one was very much interested in a plot; they just wanted to see Ryan Reynolds turned loose in his irreverent style, and they were entertained. And as much as fans likely thought that’s all they wanted for a sequel, it would have been disappointing if the franchise had not evolved a little bit beyond the antics. Again the team led by Reynolds had just the right instincts. Deadpool 2 would carry on the traditions of making fun of pretty much everything but would add two things missing in the first film. There would be more of a story. The story would provide both the character and the film with more of an emotional center, and they would introduce another beloved character from the X-Universe to drive it all. As tempting as it might have been to just press rewind and start again, Deadpool 2 delivers on the expectations while throwing enough solid elements our way that it’s not hard to leave the film feeling a bit fuller than you did the first.

Deadpool (Reynolds) begins the film a bit depressed. Some of it has to do with the result of the Logan film, and some of it has to do with a deeply personal loss. He’s a bit self-destructive, but that’s a bit of a pain in the butt when you really can’t off yourself. So he’s led to the X mansion, where he joins the team as a trainee and tries to find some meaning to his unending life. It’s on his first mission that he meets a mutant boy named Russell (Dennison), who is a mutant who can throw fireballs with his fists, and he’s pretty angry at the abusive orphanage where he’s been tortured by the headmaster (Marsan) because he’s a mutant. Deadpool starts to feel a connection to the kid. When he’s taken down and transported to a facility that keeps mutants under control, he decides to launch a rescue mission. To do that, he assembles a team that becomes a bit of an aborted version of X Force, a team we’ll see in reality soon in their own feature film that will be Deadpool’s next screen appearance. Highlights of this team include Vanisher, an invisible mutant who provides some of the team’s best laughs and is voiced by Brad Pitt. Bill Skarsgard is Zeitgeist, who spits acid vomit. Bedlam is played by Terry Crews and can produce energy fields. Shatterstar from Mojo World is played by Lewis Tan. Zazie Beetz stars as the luck-powered Domino. The team also consists of an unpowered guy who showed up at Deadpool’s audition. They mount a rescue on a train transporting Russell and a very nice surprise character, but things turn out badly when the character doesn’t want to play nice. Influenced by the surprise character, he wants to kill the headmaster, and that will turn him into a supervillain, and that’s where Cable, played by Josh Brolin, enters the scene.

Cable is a fan favorite from the X-Universe, and he’s the powerhouse entry who will bring plenty of new fans to the film. His job is to stop Russell from eventually killing his family in the future. That puts him at odds with Deadpool, who has to fight Cable several times in the film.

Josh Brolin is having the time of his life in the Marvel Universe this summer. He’s the big bad in the latest Avengers two-part film, and he gets to eat up scenes here as Cable. The actor and character do bring a lot to the film and give us a character who can go head to head with Deadpool and bring out the best and worst in the character. He’s the one who drives both the story and the evolution of the Deadpool character by the film’s end. That and our surprise character give us much more of a largess to the film than we had in the first, and it makes a huge difference. It keeps those expectations from doing any damage.

Of course, there’s a lot of the first film’s support cast to add continuity to Deadpool’s life. Karan Soli returns as cab driver Dopinder, who now wants very much to be a hero. Leslie Uggams returns as the hilarious Blind Al. T.J. Miller returns as Deadpool’s best friend Weasel. Certainly we had to have the return of Morena Baccarin as Vanessa in what will be an extremely pivotal role in the film. Brianna Hildebrand is Negasonic once again from the X-Men, as well as the return of the CG character of Peter/Colossus. These returning characters form a bit of a family for the displaced and depressed Deadpool. This time they are part of a larger emotional arc for the film and character.

All of the elements that made this a unique film the first time remain here. The character continues to break the fourth wall and talk directly to the audience. These comments make fun of plenty of cultural icons and poke more than a little fun at Disney and Marvel. The references to the Logan film help to tie those characters together. It’s no secret that Reynolds has been campaigning Hugh Jackman hard to pull the Wolverine character out of retirement to make up for the horrible pairing from the Wolverine Origins film. I don’t want to give anything away here, but stick around and you’ll find that Deadpool 2 finds a way around that in one of the more clever and creative stingers which play out throughout the end credits. Let’s just say that Reynolds is correcting a few wrongs, both cinematic and personal. All of the R-rated violence and language is there as well. There are so many F-bombs dropped that it might be a record in a film that does not feature Samuel Jackson somewhere. All of this will offend and turn off a certain type of audience, but that’s not the kind of people who are coming to these films. If you do find yourself offended by any of this, I have to ask what you were thinking when you put down your 15 bucks to get in. Didn’t you see the first film? Didn’t you read my review? This all brings up a concern fans have with the pending Disney acquisition of Fox and a return of Deadpool and all of his X buddies to the Marvel Studios along with The Fantastic Four. Will family-friendly Disney be willing to take this kind of a risk to their image in the future? I hope so. At one time the studio used the defunct Touchstone to deliver more adult-oriented films to the box office. Hopefully, a spinoff of their Fox properties will inspire the studio to do that again. If not, Deadpool will never work in the PG-13 world of the MCU, and we might have seen the last of this special franchise.

At least for now, Deadpool continues to entertain in an uncertain cinematic future. We still have the likely release of an R-rated X Force film before the merger is completed. Even if Disney is willing to turn Reynolds and his pals loose in the future, it’s going to be hard to continue this run. Even with the additions of plot and heart, the core of the film remains the hard-core humor that is in danger of getting old soon. For now, I wouldn’t worry about a future that is not yet written. I’d frolic a bit with Deadpool and his cronies and enjoy a little refreshing fun before the summer gets really serious. Will you walk out disappointed? “I’m gonna meet you in the middle and say no.”

Gino Sassani is a member of the Southeastern Film Critic's Association (SEFCA). He is a film and television critic based in Tampa, Florida. He's also the Senior Editor here at Upcomingdiscs. Gino started reviewing films in the early 1990's as a segment of his local television show Focus. He's an award-winning recording artist for Omega Records. Gino is currently working on his 8th album Merchants & Mercenaries. Gino took over Upcomingdiscs Dec 1, 2008. He works out of a home theater he calls The Reel World. Favorite films: The Godfather, The Godfather Part II, The Body Snatcher (Val Lewton film with Karloff and Lugosi, not the pod people film), Unforgiven, Gladiator, The Lion King, Jaws, Son Of Frankenstein, The Good, The Bad And The Ugly, and Monsters, Inc.
Bent (Blu-ray) LEGO DC Super Hero Girls: Super-Villain High