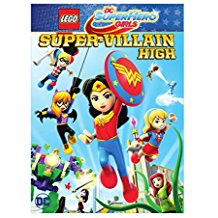 Uber High is not what it seems, and it is up to the Lego DC Superhero Girls to prove it. At first the girls are seduced by the idea of less homework and more fun. However, it is a slippery slope that turns a hero to a villain. I have to say, if my daughter was in this situation, I’m fairly sure that she would go full-on to the dark side. But in her defense, I’m pretty sure that is most kids. I mean, come on, who actually wants to do homework? Of the Lego DC comics, I think this one has the most interesting story to it, as it allows characters who have been lifelong evildoers in various platforms the opportunity to be on the side of good, if they can resist the call of their darker impulses.

Lena Luther, tired of being ranked at the bottom when it comes to being a villain, discovers an ingenious way to establish her superiority. She forcefully recruits Killer Frost, Harley Quinn, Catwoman, Cheetah, and Poison Ivy from Super Hero High. At first, the girls are happy to be at a school where they can stand out after spending so much time being outshone by the likes of Supergirl, Green Lantern, Wonder Woman, and Batgirl. However, like I said, it is a slippery slope into becoming a super-villain. Lena intends to utilize the girl’s abilities to steal technology in order to amass more power for herself. It is up to the very girls who have outshone them to save them…. from themselves.

For me, the animation is a bit juvenile. The Lego look is too pedestrian for me, especially their hands. I require my characters to have fingers, but for Miss Nalyce, the toy-look was what she loved most. When I asked why she like that aspect, she responded by requesting that we buy her Lego Superhero Girls toys so that she can create her own adventures. So, needless to say, I am currently in the market for the film-inspired toys. The story took some time to pick up traction, as matters didn’t really become interesting for me until our villains got to the Uber High. It was also very clever for Green Lantern to go undercover at the new school. I was most impressed by the representation of DC characters in various roles that I wasn’t expecting to see, such as Wildcat as Super Hero High’s gym teacher and Amanda Waller as the principal of Super Hero High.

Granted that I am not the target audience for this kind of film, I truly did enjoy watching it, as it allows me much needed bonding time with my little girl. It is great to see her so engaged in something like this. I mean, she was up off the couch, acting out certain scenes, and talking to the characters like they were in the room with us. Her favorite character was Harley Quinn, and though I tried to suggest a more positive role model, she remained firm. Her second favorite character was Supergirl, so I will take what I can get.

As this is a kids’ film, the story sticks to a PG side of villainy such as pranks and theft, and it is done in a way that works well. Besides, for kids, those are of the kinds of offenses that get them sent to bed without dessert, which is like a capital offense in their eyes. In conclusion, I recommend Lego DC Superhero Girls: Super-Villain High for the younger generation as well as parents looking to spend bonding time with their kids. It worked for me and my daughter. Not only did it get her stamp of approval, she has already watched multiple times; working it into the rotation of Descendants 2 and Teen Titans Go.

Jeremy Butler is a film school graduate of the International Academy of Design and Technology. He is been writing for Upcomingdiscs since 2012; however, movies have played a big part of his life for much longer. Favorite genres include horror, science fiction/fantasy, and comedy. Favorite movies are V for Vendetta, Boondocks Saints, Kiss Kiss Bang Bang, and The Godfather.
Deadpool 2 Gunsmoke: The Thirteenth Season, Volume One & Two