Posted in: Disc Reviews by Brent Lorentson on May 17th, 2018 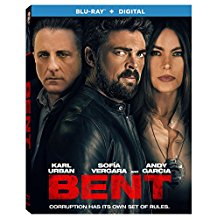 I think it’s a fair assumption to say the DTV market for film is pretty much the best it has ever been in regards to securing talent to star in the films.  When you look at a film like Bent and its cast of Karl Urban (Dredd), Sofia Vergara (Modern Family) and the great Andy Garcia (The Godfather 3, and my personal favorite Things to do in Denver When You’re Dead), it’s difficult to not get excited over its potential.  To sweeten the pot, the film’s director, Bobby Moresco, has produced two films that have best picture Oscar nominations, so one has to wonder, what went wrong?  I’m not saying the film is bad, but instead you’d just expect this film to be in another tier and not simply settling with a soft release in the new release section at Wal-Mart.    There doesn’t seem to be much buzz for this film, but it also seems that unless you’re a film that is a film festival darling or a big-budget blockbuster, it’s hard to generate any attention towards the smaller releases, and that seems to be where Bent has fallen.  With so many titles and numerous platforms releasing content, it’s simply not enough to just be good, but if you want to make waves and attract an audience you need to be something special, and unfortunately Bent just doesn’t deliver the goods.

The film starts off with a man watching a loved one climb into a car that is set to explode once the ignition is turned.  There’s nothing wrong with this start, and it does a good job at setting up the viewer to want to know more, but the film has other plans and instead thrusts us into the story about Danny Gallagher (Urban), who is a disgraced cop who is sent to prison after a sting goes bad that results in a cop getting killed.  After serving his time, Gallagher has one thing on his mind, and it’s to get payback against the person responsible for putting him behind bars.  Garcia plays his mentor, who tries to help Gallagher put these thoughts of revenge aside and instead try to rekindle his romance with Kate (Grace Byers), a singer and bar owner who lost her bar while he was serving time.  While it would make sense for Danny to pursue his love interest and keep his life on the straight and narrow, going this route also doesn’t lead to a compelling film.

In case you were wondering just what “bent” means, well, it’s simply another term for dirty cop, and the term is thrown around a lot in this film to the point where it gets obnoxious.  It seems wherever Gallagher goes he manages to cross paths with an officer who just so happens to know who he is, and they enjoy reminding him what kind of scumbag he’s supposed to be.  One other thing you’ll pick up quickly with this is that it seems Urban has decided to play the character of Gallagher as though he is a man without emotion.  From start to finish he seems to have the same expression on his face, whether he’s at the bar looking at the love of his life, fighting an agent hired to kill him, or having sex with a stripper.

While Gallagher is plotting his revenge, he discovers he seems to get sidetracked by another case that involves the woman who was killed in a car explosion at the start of the film.  How he manages to shift his attention so drastically and easily is a bit murky in the storytelling department, but it’s something to be forgiven, because as a viewer we know it’s going to manage to tie the whole story together.  It’s here where we also meet Rebecca (Vergara), who plays a government agent who seems to have an agenda of her own.  While Gallagher seems to be making progress with his investigation and following this trail of corruption, his life also seems to grow more and more into peril.  As the story attempts to grow more complex and introduce us to these corrupt and dangerous characters, the decision making by Gallagher just seems silly, because after all, he’s not an officer anymore; why worry about anything else other than getting some revenge while enjoying some freedom.  There are simply so many bad decisions being made between characters to further the story along that it gets hard to accept the thread of narrative logic.

This isn’t a movie you can just throw on while you’re going in and out of the room doing laundry. With all the characters and twists, the story does require your attention, even though there are points that will still leaving you scratching your head.  There is just enough action here to maintain your attention, but the result is a film that will leave you wishing it was something so much more.

Bent is presented in the aspect ratio 2.40:1.  The 1080p image is arrived at with an AVC MPEG-4 codec at an average of 21 mbps.  Despite the film’s attempts to be a neo-noir film, a good portion of the film is shot in the daytime.  Textures come through nicely, most notably Urban’s black leather jacket he seems to always be wearing.  The overall film has a bit of a bland color palette, with the exception of when we see Urban meet up with Garcia on a fishing boat, where we get some nice colors introduced to the film.  There are a couple moments where the film shifts to black & white as we see Gallagher have some brief flashbacks.  These moments look pretty good. There is still some detail, but what is missing is the grain/ film noise to give this the dirty look and feel of a detective film.  It’s a bit too polished with its look and just lacks anything visual to give this a moody atmosphere.

The DTS HD-Master Audio 5.1 track is well done for a DTV release.  There seems to be always something going on in the background noise, which makes it feel closer to real life.  The dialog comes through clearly, which is important with this film so you can keep up with all the character names that will be thrown at you to keep track of.  When it comes to the impacts of fight scenes and gunfire, it definitely adds an immersive layer with the side speakers and bass being properly utilized.  As for the score, it manages to carry the film along and manages to fit with the action beats and build tension with some of the films key confrontations, but it doesn’t add anything else to the film.

Behind the Scenes: (10:55) There is a lot of behind-the-scenes footage that is cut together with interviews with the cast and crew discussing their involvement with the film.

Cast and Crew Interviews: (24:25) We do get the option to pick and choose the interview we want to see or hit the play-all button.  It’s a collection of interviews with the director, the cast, and the film’s director of photography.

This is a film that had potential but just didn’t deliver.  If you are simply looking for a film to pass the time with, then the film has enough action to keep you watching, but if you were hoping for the next great detective yarn, well, this is not the film.  Perhaps there is something more to this film that managed to get cut out, and if that is the case, then my feelings could possibly change.  Though I found this entertaining, the story narrative was clunky, and the some of the choices the characters make in this are simply ludicrous (a certain shower sex scene comes to mind here).

Brent Lorentson is a horror writer and film critic based out of Tampa, Florida. With a BA in Digital Film, he co-wrote and co-directed Scavenger Hunt. His short stories have appeared in various horror anthologies. In 2019 his short script Fertile Blood will be a part of the anthology horror film Slumber Party. He is currently working on his first novel A Dark and Secret Place set to be released in late 2019. Favorite Films: Taxi Driver, Fight Club, I Saw the Devil, The Wild Bunch, Dawn of the Dead, A Clockwork Orange, Pulp Fiction, Heathers, The Monster Squad, and High Fidelity.
Braveheart (UHD Blu-ray) (4K) Deadpool 2