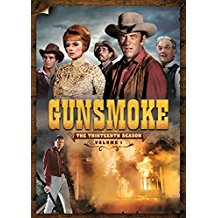 The two season halves have been released at the same time. It offers you the opportunity to buy it all together, and why wouldn’t you? You get 25 episodes on six discs total. The only extras are a few episode promo spots.

Highlights from the season include: The season opens with one of the show’s best episodes. I’m talking about The Wreckers. Dillon and Kitty are on a stagecoach where Matt is escorting a criminal to Dodge City. The crook’s gang sabotages the coach to break down, which causes Dillon to be injured and the crook out cold. When the gang shows up, Kitty puts Dillon’s badge on the crook, making them believe he is the lawman. A good chance for the Kitty character to shine. A muckraking newspaper pushes two outlaws to go gunning for Dillon when their buddy is shot in the back in The Prodigal. They come looking for revenge, because the speculation in the paper puts Dillon behind the cowardly shot. Comedy reigns in Hard Luck Henry. The titular character is cousin to Festus and seeks his help to split a cache of gold coins among the clan. Of course, Henry’s antics get in the way of an earnest Festus. Festus is also the center of attention in Major Glory. Soldiers are in Dodge City and one of them has a run-in with Festus. Now Dillon’s stuck in the middle to keep the soldiers from taking Festus away to be punished. The character of Newly O’Brien is introduced this season in The Pillagers. Newly and Kitty get kidnapped because the crooks think Newly is a doctor. The character would end up appearing in 174 episodes over the remaining run of the show. Newly starts as a gunsmith and ends up a deputy on the show.

After almost facing cancellation in its 12th year, Gunsmoke regained ground and reputation in year 13. Gilligan’s Island ended up taking the cancellation hit originally intended for Gunsmoke. You can almost look at this season as the resurrection and beginning of the final seven years of the show’s run. The show also moved from its late 10:00 PM Saturday night slot into a family-friendly Monday at 7:30 timeslot. As for the fans of the time, “If you think they weren’t grateful …”

Gino Sassani is a member of the Southeastern Film Critic's Association (SEFCA). He is a film and television critic based in Tampa, Florida. He's also the Senior Editor here at Upcomingdiscs. Gino started reviewing films in the early 1990's as a segment of his local television show Focus. He's an award-winning recording artist for Omega Records. Gino is currently working on his 8th album Merchants & Mercenaries. Gino took over Upcomingdiscs Dec 1, 2008. He works out of a home theater he calls The Reel World. Favorite films: The Godfather, The Godfather Part II, The Body Snatcher (Val Lewton film with Karloff and Lugosi, not the pod people film), Unforgiven, Gladiator, The Lion King, Jaws, Son Of Frankenstein, The Good, The Bad And The Ugly, and Monsters, Inc.
LEGO DC Super Hero Girls: Super-Villain High The 15:17 To Paris (Blu-ray)