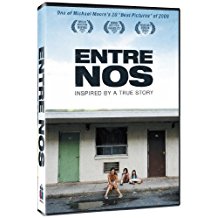 As with Vol. 4 of Film Movement’s Festival Picks, this grouping of films is tied together by a very specific theme: estranged father figures. On the whole, this set of films has a much better pacing than its preceding volume, but it is not without pockets of slow-moving story. However, I feel that there is something naturally compelling about an estranged family member within a narrative, as it provides a conflict that seems to write itself. The most interesting aspect of this collection is the different ways in which each relationship is reconciled. In Jermal, the relationship between father and son is repaired through hardships. In The Girl in Yellow Boots, the relationship is rekindled negatively. And in Entre Nos, the relationship is abandoned.

The Girl in Yellow Boots is strange, as it has the most intense narrative, but also it the slowest pace of the three films. It is a character study about a young woman who moves to India to find her father. While the titular yellow boots don’t really factor into the plot of the film too much (she wears them at the beginning, but they largely become inconsequential), her profession as a massage therapist and the relationships she develops with her clients are the crucial elements of the film. While the film does sport a slow pace, it has the heaviest, or “messed up,” climax of the three films, in terms of reconciling with her father.

Jermal is the most heartwarming of the three films, as it is a coming-of-age tale of a boy whose father is forced into reconciling with his past. Despite that synopsis sounding a bit harsh, the relationship that develops between the father and son is the most well-paced of the three films. The entire film takes place in one setting: a “jermal,” which is basically a type of platform in the middle of the ocean used for fishing. Keeping a film in one place and keeping your audience’s attention is a very difficult thing to do at the same time, especially if the film examines the subtle changes between two characters. The way the camera treats the jermal is very visually engaging, creating individual and unique physical spaces for each scene, despite the square footage not exceeding 1500 square feet.

Finally, Entre Nos is less about an estranged father figure and more about an absent man in the life of a family. After migrating from Columbia to New York, a father leaves his family when he is offered a new job in Miami. Mariana must then get creative when it comes to providing food, shelter, and entertainment for her two children. Of the three films, this was the most entertaining. It is sad, sweet, and above all, very well acted. Paola Mendoza as the mother, Sebastian Villada and Laura Montana as her two children really carry the viewers through the film. Considering the film was “based on fact,” it really helps to have a believable cast to really appreciate the ups and downs of the story.

In addition to having very similar narratives, each of these films utilize mise-en-scéne in a creative way. I’ve already expressed how it was important for Jermal to do this in order to enhance audience engagement, but after reflecting on each film, not a single set was wasted. There are so many intricacies to the massage room and apartment building in The Girl in Yellow Boots, as well as the on location shooting in Queens for Entre Nos. These are the types of movies where the setting is just as much as a character as the lead actors are (think Woody Allen and Martin Scorcese films form the 1970’s).

Overall, Vol. 5 receives a passing grade. If I had to pick a favorite of the three, I would favor The Girl in Yellow Boots, simply because of the weightiness of the narrative. It is slow-paced, but there is so much to look at, and the payoff for the character’s quest to find her father is tremendous. Each film has enough formal elements to foster engagement, but they still require a little more attention than is given by hedonistic moviegoers. However, they are a perfect addition to a festival-goer’s collection.