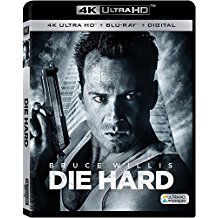 “Just another American who saw too many movies as a child? Another orphan of a bankrupt culture who thinks he’s John Wayne? Rambo? Marshall Dillon?”

So the great debate rages on. Is Die Hard a Christmas movie or just a movie that happens to be set at Christmastime? Recently Stephen Amell from Arrow told a press group that his favorite Christmas movie was indeed Die Hard. He’s not alone there. I’ve had the debate a few times myself. Unfortunately, I come down on the side that Die Hard is not a Christmas movie. Here’s my criteria. Does Christmas play a vital part in the plot of the movie? The truth is that Die Hard could have happened at any time, as the many sequels have demonstrated over the years. Fox obviously doesn’t think of it as a Christmas film. Why? Because they’ve waited until summer to release the film on UHD Blu-ray in glorious 4K. They could have released it for the shopping season or even held it for next shopping season. Either way, be glad it’s not a Christmas movie, because it’s May, and the film is out now in 4K. Grab it up and enjoy Christmas in May, if that’s your thing.

John McClane just can’t catch a break. It seems his wife has moved from their home in New York City, where John’s a cop, to L.A. to take a job with the Nokotomi Corporation. McClane plans a visit to his wife for Christmas. When he gets there, he finds out she’s been using her maiden name; and oh yeah, apparently terrorists have taken over the nearly-completed skyscraper.

McClane roams the ventilation and elevator shafts of the building trying to stay one step ahead of the bad guys. His only ally is an unlikely street cop whom he only knows as a voice on a stolen walkie talkie.  The feds want him out of their way, the bad guys just want him dead, and he’s not sure his wife wants him at all. McClane manages to take down the bad guys, who are really just common thieves, and almost takes the building down with them.

This was the breakout film for Bruce Willis, who had spent the years before mostly on television. It made him an overnight action star. Thirty years later, it’s a hoot to see the young Willis playing hide and seek with the bad guys. The new release also hits home the loss of Alan Rickman, who delivered one of Hollywood’s best all-time villains in this movie. He’s absolutely on the top of his game here. Reginald Vel Johnson has bounced around the last 30 years between television and a few feature films. He has never come close to the character he created here as Al the cop who hangs with McClane on the walkie.

The supporting cast is filled with plenty of good names and performances. Bonnie Bedelia would return to role of McClane’s on-again/off-again wife in some of the film’s sequels. Robert Davi is stone-cold as FBI Agent “Big” Johnson. We talked to Davi a couple of years ago, and that conversation can be heard here.

There have been plenty of action movies around before Die Hard. But there’s no doubt that this changed things somewhat for the genre. It brought on a ton of copycats over the years that tried to imitate this somewhat more intimate kind of action movie. None have quite caught that bolt of lightning like Die Hard did. Someday it will be remade/reimagined/rebooted. I’m not really looking forward to that. I think this 4K will hold me over until Willis tries again to recapture the spirit of Die Hard again.

Die Hard is presented in an aspect ratio of 2.35:1. The ultra-high-definition 2160p image is arrived at by an HEVC codec with an average bitrate of 50 mbps. This is not one of those spectacular visual films, and you’re not going to see splashes of color. The ultra high definition does a good job of capturing the film just as it was once meant to be. Although there is unfortunate evidence of DNR the grain is still somewhat intact. The movie maintains its nice filmatic feeling throughout. At times focus is soft, and the film is absolutely dated. None of that should take away from your happiness in this 4K release. There’s a lot of detail that gets lost in previous releases. There are still some great moments that HDR has improved. Lighting effects have been routinely lost in a wash of film surface in earlier releases. Now they cut through the murkiness and provide nice contrast moments. Black levels are fair, and while shadow definition isn’t off the charts, you’re still going to appreciate this upgrade.

The DTS-HD MA 5.1 audio presentation isn’t quite what I was hoping for. Yes, the original film was in stereo, and that option remains on this disc. But I was hoping the surround mix would open this thing up a little more. That’s a tricky job, and there’s a temptation to go to far afield of the original presentation. Pretty much everything is front- and-center with a good deal of attention paid to dialog. The subs kick in on the explosive moments but not quite with the earthshaking effect I was looking for. This audio presentation sounds identical to the earlier Blu-ray and is not an upgrade at all.

The extras on the 4K disc include several Commentary Tracks ported from the previous release. The same is true of the Blu-ray features which include a few interactive things and the newscasts uncut.

Has it really been 30 years since the first Die Hard movie? Time flies when you’re having fun, and watching this film certainly qualifies. The 4K upgrade is worth having for anyone who enjoys the franchise. Here’s hoping more are coming. Until then, “Yippie-ki-yay…”

Gino Sassani is a member of the Southeastern Film Critic's Association (SEFCA). He is a film and television critic based in Tampa, Florida. He's also the Senior Editor here at Upcomingdiscs. Gino started reviewing films in the early 1990's as a segment of his local television show Focus. He's an award-winning recording artist for Omega Records. Gino is currently working on his 8th album Merchants & Mercenaries. Gino took over Upcomingdiscs Dec 1, 2008. He works out of a home theater he calls The Reel World. Favorite films: The Godfather, The Godfather Part II, The Body Snatcher (Val Lewton film with Karloff and Lugosi, not the pod people film), Unforgiven, Gladiator, The Lion King, Jaws, Son Of Frankenstein, The Good, The Bad And The Ugly, and Monsters, Inc.
Red Sparrow (UHD- Blu-ray) (4K) IndiePix Festival Picks Vol. 5 The Girl in Yellow Boots – Jermal – Entre Nos