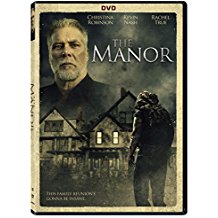 I’m going to pretty much start this off by saying The Manor is pretty much the horror equivalent of The Room.  When I write this I’m not sure if the comparison is a compliment or not, whether the film was intended to be this bad or not.  It’s possible to do a film that is so bad it’s good, this goes way back to the Ed Wood era with some B-movie classics and later on in years we got Troma films. Though despite many of these films later becoming fodder for Mystery Science Theater, there was still a level of quality or charm to them that made them watchable (usually in the late night hours when viewers are too drunk or stoned to care about what they were watching).  This brings me back to The Manor where I’m left questioning their intentions. Is this a film made to garner the same success that we’ve seen from The Room or is this film just bad?

When we first meet Amy (Christina Robinson) she is having herself checked out from a mental ward after being there for a few years.  Now that Amy is 18 and being released into the care of her mother, the plan is to simply reacquaint her with the family.  While the family is getting together at Anders Manor there are a few more oddball guests that are staying for a visit as well.  Between a trio of hillbilly hunters, one of which seems to be a generic leather clad Steven Seagal impersonator, then there is a religious group called the True Believers and their leader is played by Kevin Nash.  Mix in some cotton candy, incest talk and some booze the film only continues to get stranger.

The film is loaded with flashbacks most those that belong to Amy and her time while she was at the mental institute.  These scenes really are the best thing the film has going for it, whether it is her electric shock treatments or her conversations with her shrink played by Rachel True (The Craft).  Unfortunately there are flashbacks that go back to when the caretaker of the manor was a child and his father decides to teach him about chess, these flashbacks go on throughout the film as well; the most absurd one involves the father singing “I am the white pawn.”

When night falls we finally get to some action and we see a ridiculous demon begin to kill those visiting the manor.  Mix in some incest, a demon playing with marionettes, and plenty of wine drinking then you basically have a grasp on what this movie is.  Characters go and go from this story as they please with no real sense of logic, some of the camera shots and angles are questionable at best, it’s as though they knew a guy that had a drone and figured to just throw in some drone shots of the house. By the time the film reaches its conclusion and tries to surprise us with a twist that is simply groan worthy.

This is one of those instances where if this was a film where the director just got some friends together and just decided to make a movie because they thought it would be fun, I would be more forgiving.  But this is a film that has paid talent and a real crew behind it, this isn’t a student film but something people really invested money into and somehow it was seen to completion. Bravo for at least getting a film done but securing distribution as well which is also impressive, but again it has me wondering what was the intent of this film?  Did the distributor genuinely look at this title and think this was a horror film they needed to acquire or did they see this as possibly The Room for horror fans to rally behind and develop a cult following with it?

I’ve watched the film twice now; my second viewing basically was to confirm my thoughts about the film but also because the dialogue was so low on this it required a second viewing to make sure I heard everything correctly.  The sound issue I’m not sure if this is a result from the source material or a mishap in the transfer but it is a problem that only piles on to the films other issues.

Brent Lorentson is a horror writer and film critic based out of Tampa, Florida. With a BA in Digital Film, he co-wrote and co-directed Scavenger Hunt. His short stories have appeared in various horror anthologies. In 2019 his short script Fertile Blood will be a part of the anthology horror film Slumber Party. He is currently working on his first novel A Dark and Secret Place set to be released in late 2019. Favorite Films: Taxi Driver, Fight Club, I Saw the Devil, The Wild Bunch, Dawn of the Dead, A Clockwork Orange, Pulp Fiction, Heathers, The Monster Squad, and High Fidelity.
IndiePix Festival Picks Vol. 5 The Girl in Yellow Boots – Jermal – Entre Nos I Kill Giants (Blu-ray)