Posted in: Disc Reviews by Brent Lorentson on May 24th, 2018 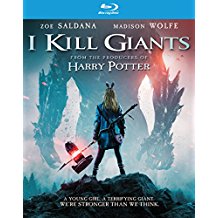 This is one of those films that for some reason didn’t find an audience during a theatrical run, but I can guarantee there are viewers who are going to connect with this film and embrace it for years to come.  I say this because only a few years ago there was a film that was similar in tone, A Monster Calls, and to be honest, that film devastated me as we went along with the main character as he and his imaginary monster helped him cope with his mother who is dying from cancer.  I Kill Giants is at face value the same film, only told through the eyes of a young girl, though despite the films being so similar, it doesn’t lessen the film’s overall impact in the least. Sometimes a good story simply works. No matter how much you may dress it up, its emotional impact can remain the same.

When we first meet Barbara (Madison Wolfe), she is working her way through the woods, checking and setting her traps which we soon find out are for the giants that seem to be haunting the area.  With her bunny ears, what she considers her way of channeling her spirit animal, she seems just your average young girl with an overactive imagination.  The more we get to know Barbara, as we see her as a loner being raised by her older sister Karen (Imogen Poots) and barely tolerating her obnoxious brothers, we get an ever-growing glimpse into her lonely life.  When she befriends Sophia (Sydney Wade), a young girl who has recently moved from England, we can only hope things will improve for Barbara, but instead we quickly understand how deep her belief in giants really is.

Barbara manages to constantly be on the receiving end of being bullied, but what is nice to see is that Barbara isn’t afraid to fight back; after all, she’s been preparing to fight giants; by comparison, how dangerous can a bully be?  Her behavior at the school as well as her home situation is what draws the attention of the new school guidance counselor, played by Zoe Saldana.  The relationship between Barbara and her guidance counselor isn’t exactly a unique scenario, but when we see Wolfe and Saldana on screen together, the result leaves quite the impression.  To go even further, the relationship with Barbara and Sophia feels genuine, because it’s not as though they meet and become instant friends, but Sophia in a way is a connection with the audience where we get to learn about Barbara at the same time as Sophia.  Despite knowing that giants don’t exist, Barbara believes in them so deeply that as a viewer we are openly ready to accept her reality, that is, until we finally begin to see what is really going on.

We do get to eventually see giants in the film; the first time is through animation, as Barbara tells Sophia about the variety of giants that will eventually attack their small town.  As the story progresses, we do get to see the giants that are lurking in the woods and beneath the surface of the ocean, and the result is satisfying.  The cinematography from Rasmus Heise does a good job at presenting a dark and moody beach town, and the forest is captured in rain and fog with enough creepiness that makes it easy for the viewer to believe there is something not of this world living in the woods.

While we have shows like Stranger Things and films like It that are tackling the kids-in-peril genre that seemed to flood the cinemas in the 80’s, what stands out with I Kill Giants is that it manages to  capture the heart of that time period.  This is a fun yet at times heart-wrenching film that the whole family can enjoy.

This is an impressive first film from director Anders Walter; prior to this he only had made a handful of short films.  This is a film that gets me excited about what he will bring to the screen next.  I Kill Giants is one of those gems that snuck into theaters under the radar and was overshadowed by the big blockbusters that were flooding the multiplex.  This is simply one of those films that begs to be seen and shared. It’s something we can all relate to in our own way.

“People fear what they don’t understand.”

I Kill Giants is presented in the aspect ratio 2.40:1.  The 1080p image is arrived at with an AVC MPEG-4 codec at an average of 21 mbps.  Overall the film has a dark and cloudy look to it. There seems to be a constant drizzle of rain or mist in all the film’s exteriors.  The gloom manages to even make its way into the interiors of the film, which is fine, because, well, this isn’t exactly a happy film.  The yellow raincoat we see Sophia wearing in most of the film seems to be the only color that manages to pop on the screen.  Detail is a little muddy at times, like when we see the giants the focus seems to be rather light, as though they are simply blending in with the shadows of the trees.  In the animated segment of the film we see plenty of reds and yellows, but again we get little in the way of detail, more like vague outlines of the shadows.  The blacks and scenes where it is dark we do get plenty of definition. Shadow play is important in the film, especially in a creepy scene where we see shadows crawling up the walls of Barbara’s home.  This isn’t the best looking film, but it definitely fits the tone of the film.

The DTS-HD Master Audio 5.1 track is on par with your typical big-budget fantasy film release. Whether it is the forest coming alive with the creaking of the trees to imply there is a giant lurking further in the woods, or simply seabird calls on the beach, the sound design works well here. Sound helps us slide into Barbara’s imagination, where we hear what she does, but she manages to paint a far more troubling picture for us in regards to the monsters in the woods.  The dialog is clear, and the score blends beautifully with the film.

The making of I Kill Giants: (5:39) A brief look into the production of the film where we get a collection of interviews with cast and crew discussing the film.

Anatomy of a Scene: (4:52) This is more of an overview of what was involved with shooting the scene where Barbara is confronted by the Titan on the beach.

The Graphic Novel Chapter One: Here we get the chance to scroll through and read the first chapter of the graphic novel the film is based on.

This is one of those films I know I’m going to re-watch plenty of times in the future.  This is the film that is fine for the whole family but can also serve as a way to discuss difficult topics such as sickness or a death in the family.  I don’t mean that this is simply a depressing story, because it’s not; this is simply a film that has a lot of heart and depth  as compared to your typical children’s film.

Brent Lorentson is a horror writer and film critic based out of Tampa, Florida. With a BA in Digital Film, he co-wrote and co-directed Scavenger Hunt. His short stories have appeared in various horror anthologies. In 2019 his short script Fertile Blood will be a part of the anthology horror film Slumber Party. He is currently working on his first novel A Dark and Secret Place set to be released in late 2019. Favorite Films: Taxi Driver, Fight Club, I Saw the Devil, The Wild Bunch, Dawn of the Dead, A Clockwork Orange, Pulp Fiction, Heathers, The Monster Squad, and High Fidelity.
The Manor Solo: A Star Wars Story