Posted in: Disc Reviews by Michael Durr on June 2nd, 2018 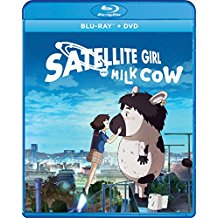 Much to the dismay of probably most of my family and friends, I like to watch lots of weird films. Films directed by David Lynch, Planet of the Apes movies, and Johnny Mnemonic (I freaking love that movie) among many others I have watched over and over again. This is even more true with animation as I love to find clever styles that goes beyond convention and still produce a wonderful and thrilling story. So today, I review Satellite Girl and Milk Cow, a Korean animation film that is sure to test the boundaries of my fondness for weirdness. Is it too much for this critic or is it right in my sweet spot? Let’s find out.

Above the Earth, we see various satellites circle the great planet. One of those satellites is named KITSAT-1 who takes pictures of the Korean Peninsula and provides other measurements. But like all things, KITSAT-1 has started to break down and stop working. Instead she uses her time to focus in on various sounds, sounds like a boy playing a wonderful song on a piano at a lonely club. The sound captivates her so much, she decides to speed towards Earth to seek it out.

Meanwhile, a Milk Cow is being chased by an Incinerator (oh just wait, this hasn’t jumped the shark yet). The Cow is nearly eaten by the Incinerator but is saved by Merlin the Wizard, a toilet paper roll who can use his magic paper to do many wonderful things. (nope, keep waiting) In the distance, Merlin sees a comet and runs towards it. The comet is actually KITSAT-1 who then changes into a girl while keeping some of her satellite characteristics and capabilities. (flying, metal insides, voice, shooting arm) Meanwhile, we see an odd man steal the liver out of a nearby animal with a plunger(shark jumping commenced).

The odd man then tries to steal the liver of the Milk Cow (apparently Milk Cow livers are worth a lot on the open market) but thankfully the Milk Cow is able to escape. We learn that the Milk Cow used to be a boy who was once on a pop idol show only to have his heart broken and lose his way. Apparently, having his heart broken means that he gets transformed into a random animal and then chased around by an incinerator. Oh don’t forget the creepy guy with a plunger who wants his liver. Anyway, eventually this Milk Cow meets the Satellite Girl and the girl realizes that the voice of the Milk Cow is actually the same boy that she fixated on when she was orbiting the Earth.

So eventually we establish a plot-line, Satellite Girl and Milk Cow with the help of Merlin and his magic toilet paper must locate and trap the incinerator. If they are able to defeat the giant robot, then they can restore balance to the world and people will stop transforming into talking animals and being hunted for their livers by creepy guy over there. Oh, also Satellite Girl and Milk Cow start falling for each other because that’s what Satellites and Cows do I guess.

So, for those playing at home, do you actually understand what is going on? Good, because can you tell me please? I’m still confused on what I’m watching and I’m taking notes for goodness sake. Anyway, I wish I could say it is a particularly interesting movie, but it’s rather dull actually. It also does not help that the film’s three main characters are all whack jobs. The Milk Cow can’t go out in public for very long before his human suit gets wet or snags onto something and rips. Satellite Girl has to be refilled with gas or recharged or parts have to be replaced (by the way, it feels horribly inconsistent with what she has to do to stay functional). And don’t even get me started about the quicker picker upper for Mr. Hanky over there.

The thing about weird films and more importantly weird animated films is that you need a grounded center. Somebody who is fully human, central to the story and while they might have quirks like social ineptness, they aren’t a Milk Cow who occasionally dons a human suit and has to be milked to pay the rent. Well part of the rent anyway. Point is, when everything is weird, it actually becomes dull because all of the strange phenomenon isn’t so strange after all. What’s worse is that we don’t care what happens to the couple. Or what happens if Merlin runs out of juice, errr Charmin squares or if Mr. Creepy starts to drive an ice cream van (okay, thankfully that does not happen).

The film is shown in a 1.85:1 Widescreen picture that is excellent and very pleasing to watch. There are many wonderful and fun things to look at in this world and all of them are animated very well. Color is rich, scenery is lush and no image or object just stands around hoping to not be noticed. The world is alive, and this is one of the shining points of the film and technically interesting on the eyes.

Equally impressive is the audio. This features DTS HD 5.1 tracks for Korean and English (dub). I spent my time listening to the Korean track which was clear and filled the front speakers. Your surround speakers as well as your sub do come to life during some of the action sequences and piano pieces. It’s not amazing, but I would certainly classify it as very good.

In addition to the audio options, there are three sets of subtitles also available. One English track for the Korean audio, one English SDH track for the English dub (or those who are hard of hearing) and then one in French. Excellent well done subtitles are always appreciated.

Coffee Vending Machine and Its Sword 29:53 : This is a short from 2007 with the same director, Hyeong-yoon Jang. Its about one of the best swordsman who unfortunately meets an untimely fate against a powerful opponent. Upon his death he wishes for his next life to have a steel body that can’t break. When he is reincarnated, he becomes a coffee vending machine. By day, he is able to turn into a teenager for a short period of time where he spends most of it fighting other ninjas. After turning back into a coffee vending machine and finding himself stranded in the middle of a street, he is met by a girl. The girl takes him home and after an odd night of snuggling, puts the machine outside. Soon, she’ll realize that this machine is very special indeed. Honestly, this short is much better than the feature film primarily due to the fact that we actually have some likable characters and at least one of which is fully human. It does share a lot of the same concepts with the feature film though (transformation into odd creatures/things, has a way to turn human for a short period of time, oddball romance, etc).

Trailers 3:09: This has the original trailer as well as the US Trailer with English Subtitles.

Note: A DVD was also provided in the combo package. I would suggest for future releases they consider clear blu-ray cases so we can enjoy the interior art.

Satellite Girl and Milk Cow is a film that I wanted to like very much. It’s different and the characters are wonderfully eccentric. However, because there is no normal center, nothing we can bounce all of this weirdness off of, we are left with a rather dull film. It’s not a bad movie for sure, but it is one that even though its only 81 minutes is something of a chore to get through.

The disc is superb in the video and audio department. It also has a wonderful short film which actually surpasses the feature itself, a rare feat for most discs. But unfortunately that’s all they are able to provide us to supplement the film. A film with potty humor that we are left not caring for, a movie that’s completely forgettable. Which is also a rare feat for a film featuring a talking cow or a satellite that turned into a talking girl, or a toilet paper roll that’s really a wizard. I’m still having issues with that one. Lovers of strange anime might want to give this a spin, but I think most viewers should probably pass on this one (or seek out the short film instead). Take care.

Michael Durr has been reviewing movies for the better part of fifteen years now. He primarily enjoys thrillers, sci-fi, animation and even a little courtroom drama. His favorite films include Escape from New York, the Goonies and anything with Alyssa Milano. When he’s not praising Kurt Russell as the greatest actor of our time or scratching his head over a David Lynch flick, he’s spending time at home in Texas with his lovely wife, Lori and his amazing son. How they put up with him is a mystery, but even Basil Rathbone doesn’t have the time to solve that one.
Jurassic Park 25th Anniversary Collection (UHD Blu-ray) (4K) Jericho: The Complete Series