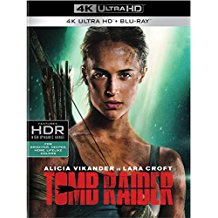 Summer continues to heat up, and so does our weekly Tuesday Round Up! This week’s crop of releases features action, comedy…and titles that contain plenty of both! Warner Bros. goes digging for adventure with Tomb Raider (4K), the big-screen reboot of the mega-popular videogame franchise. If you’re looking for laughs AND action, Paramount has you covered by releasing the Eddie Murphy one-two punch of Trading Places and Coming to America on Blu-ray and the Jerry Lewis 10-Film Collection before changing gears and giving everyone’s favorite time-travelling killer cyborg a UHD makeover with Terminator: Genisys (4K). And if you want to watch a really nice guy run for a long time, Paramount is also releasing a little movie called Forrest Gump (4K). Universal keeps the laughs coming with Will & Grace — The Revival: Season 1, but also gets scary with The Strangers: Prey at Night. Last but not least, Fox injects some romance into the week with teen dramedy Love, Simon.

Of course, I couldn’t go on and on about all this great action and great comedy without mentioning the sequel to a movie that did both at the highest level: later this week, we’ll have a review for Disney/Pixar’s The Incredibles 2. On top of that, Warner Bros. tries to avoid being “it” with Tag, while Focus Features throws on a cardigan and revisits beloved icon Mister Rogers with Won’t You Be My Neighbor. Before you run off until next week, here’s for your customary reminder: if you’re shopping for anything on Amazon and you do it through one of our links, it’ll help keep the lights on here at UpcomingDiscs. See ya next week!