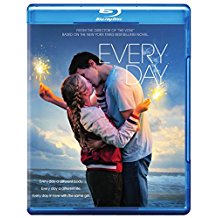 “I am someone who wakes up in a different body every day.”

Every Day manages to be both clumsily straightforward and frustratingly vague about its fantastical premise. The movie centers on a mysterious traveling spirit known as “A,” which — as you can read above — inhabits a different body every day. Unfortunately, there’s little-to-no exploration as to why or how A (conveniently) only inhabits the bodies of camera-friendly teens. The best thing about this premise is that it injects the otherwise tired and homogeneous teen romance genre with a new look. (Actually, it ends up being closer to 15 new looks.)

We meet A the morning he wakes up as Justin (Justice Smith), a handsome dolt who is dating a girl named Rhiannon (Angourie Rice). A (as Justin) is immediately drawn to Rhi, and the pair decide to ditch school to spend a perfect day together that involves Rhi opening up about her parents’ (Maria Bello, Michael Cram) strained reletionship. The following day, Rhi is puzzled by the fact that Justin has gone back to his normal neglectful self and has no memory of their perfect date. On top of that, Rhi meets a strange exchange student named Amy (Jeni Ross), who quickly displays an unnaturally strong dislike for Justin. Things get even more complicated the following day when Rhi connects with a religious young man named Nathan (Lucas Jade Zumann), who happens to love the same song Rhi and Justin sang together during their perfect day.

“You know every day won’t be like this, right?”

Shortly thereafter, A (Jacob Batalon) arranges a meet with Rhi to explain his body-hopping situation and that he has spent time with her as both Amy and Nathan. Rhi is naturally suspicious, but eventually comes to believe this unusual, otherwordly situation. A and Rhi begin spending time together and form a relationship. But can their young, burgeoning love survive the stress of A’s ever-changing physical form? A prefers to blend into the background and not make waves each day since the people he/she inhabits will have to go back to their normal lives the following day. As a result, A has to decide if his/her responsibility to those temporary hosts is more important than a romance with Rhi?

Every Day is based on the 2012 YA novel of the same name by David Levithan. This movie adaptation — directed by Michael Sucsy, who brought a similarly idyllic palette to 2012’s The Vow — smarly puts us in the same disoriented head space as Rhi by taking a little time to lay out A’s predicament. (You’ll probably be wondering, “Why do these different people wake up and immediately set alarms for 11 and 11:50 p.m.?”) Then again, the filmmakers might’ve also been holding back explaining A’s predicament because they knew there were no satisfactory answers.

We learn that A is just as confused about his lifelong traveling abilities as we are, which feels like the story’s way of avoiding a definitive explanation. I’m not saying the movie would’ve been better if we’d found out that A was an alien or a science experiment gone bad. The problem is that the story’s central message about loving a person’s spirit regardless of their physical appearance is undermined by the fact that — for no apparent reason — A always appears to Rhi as someone who is nearby and very close to her age. (Of course, the practical reason is that Levithan and the filmmakers probably didn’t want to deal with the potential ick factor of having teenage Rhi fall in love with someone old enough to be her grandfather/grandmother…or a 6 year old!)

Rice is a relatable anchor for this outrageous story. The actress also gets to show off some comedic chops during the day that A gets a little too close for comfort. Speaking of A, the character is intriguingly brought to life by a refreshingly wide range of performers.

The standouts include Spider-Man: Homecoming scene-stealer Batalon and Zumann, whose distressed Nathan believes he was possessed by the devil. Smith, who establishes A’s soulful presence before acting out Justin’s naturally jerky side the rest of the time, probably gives the best performance(s) in the film. Debby Ryan (as Rhi’s older sister) scores a few laughs as Rhi’s amused, skeptical older sister. Maria Bello, on the other hand, is severely underused as Rhi’s stressed out mom. (There’s an infidelity subplot that is brought up and goes absolutely nowhere.)

The movie’s sloppiness extends to its final act, when A starts to explore the possibility of remaining in the same body for more than one day. (Could A do this all along, or is it something that takes great effort? Who has the answers?!) Luckily, the movie has a game and diverse cast to help sell this nonsense.

Every Day is presented in an aspect ratio of 2:40:1. The 1080p image is arrived at with an AVC MPEG-4 codec at an average of 37 mbps. This exceedingly clean and warm presentation is a strong match for this story of young love. The movie essentially opens by showing us a perfect day between Rhi and A (inhabiting the body of her doofus boyfriend Justin), and the soft, rose-colored visual presentation follows suit. This Blu-ray release from Warner Bros. is especially adept at fleshing out the lush, pleasing greens in this movie, particularly when Rhi and A escape for a romantic, ill-fated weekend in a secluded cabin in the woods.

The DTS-HD Master Audio 5.1 track is well balanced but mostly comes to life when a New Wave-y pop song bursts out of the speakers, which is actually quite often. (Rhi and A bond over their shared love of The The’s “This Is the Day.”) Even with the frequent musical cues, there’s pretty strong separation at work here. The scenes at Rhi’s high school feature some nice background noise in the rears while dialogue remains up front.

Love is Love: (1:13) A glorified trailer for the movie featuring cast and crew comments. Mostly notable for the fact that I got to present star Angourie Rice with the coveted, “Wait, That Person is Australian?!” award.

Every Day People: (2:03) Pretty basic breakdown of the movie’s plot and characters.

An A by Any Other Name: (2:12) Focuses on all the performers who brought A to life, and finally things start to get interesting with these featurettes. Since the actors obviously couldn’t watch each other while the movie was being made, the filmmakers gave each of them a letter that described A’s character arc. It allowed them to have a uniform idea of the mysterious traveler they were tasked with playing.

Book to Film Adaptation: (1:31) Lots of cast and crew love for the book by author by David Levithan, who also pops up on this featurette. The most intriguing tidbit is director Michael Sucsy briefly describing the decision to shift the story’s POV from A (in the book) to Rhi (in the film), which gives the movie adaptation a more stable anchor.

Deleted Scenes (20:16) There are 16 scenes total, although roughly half of them are moderately extended versions of moments that made the final cut. The most intriguing pair of deleted scenes involve a character named Reverend Poole, who is helping Nathan deal with his traumatic day as A…and seems to have some knowledge about travelers. (The movie is extremely committed to being vague about A’s ability, so I’m not surprised this subplot was taken out.) Unfortunately, this disc doesn’t give you the option of selecting individual scenes; instead, they’re all clustered together under the menu’s “Deleted Scenes” entry.

Every Day puts several new faces on the teen romance/YA genre, which makes it a mildly innovative viewing experience. But all the unanswered questions and gaping holes in the story’s logic make it very hard to truly connect with the characters, which means the film — like the conflicted traveler at the center of it — doesn’t end up making a lasting impression on anyone besides Rhi.