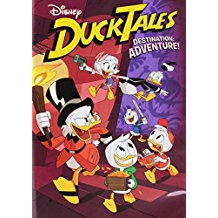 Childhood nostalgia abounded when I got this disc. Ducktales was a huge part of my childhood. I mean, who didn’t follow the adventures of Huey, Dewey, and Louie back then?And who could forget about Scrooge McDuck and the Money Bin? So when I heard of the revamping of a series from my childhood, I was instantly on board. However, I must admit that I had some reservation, especially following the transformation of engaging Cartoon Network series Teen Titans into Teen Titans Go! Fortunately, that wasn’t the case for Ducktales Destination: Adventure as I felt myself transported back into my childhood. There was also the added benefit of introducing a show that was a big part of my younger years to my daughter, as she is around the same age I was when I first discovered the show.

Though I remembered a majority of the cast of the original series and they all remain for this adaptation, there was one character whose name that I didn’t recognize immediately: Webby Vanderquack, the boys’ adopted sister. Interestingly, she was the main focal point of the disc’s first episode (The Beagle Birthday Massacre!). Given that the disc is not the complete season, but rather an assortment of six episodes (plus two from the original show), it took a moment to acclimate into the show’s universe. In regards to Webby, it only took a quick Google check to recognize her. The first episode addresses matters of being left out, when Webby ends up being left behind when there is not enough room in the kayak for her with Huey, Dewey, and Louie. The mood doesn’t remain sad for long as she soon meets a new friend and sets about her own adventure, which has her on the run from the Beagle clan.

The designation, Destination: Adventure, presents the theme for the featured episodes as they do indeed feature adventures that include traveling to Mount Everest (aptly named Mount Neverrest) as well as traveling to a Egyptian pyramid and having to defeat a mummy. Multiple episodes also speak about topics that will resonate with the younger generation, such as “The Spear of Selene!” where Dewey has to confront his opinion of the kind of person his mother was.

So this disc also afforded me the opportunity to compare the Ducktales of my generation with this new addition, as the disc includes two episodes from the original series. I know that my opinion is highly biased, but I have to stick with the original show for one very important reason: Gizmoduck. Gizmoduck was the very first superhero that I was ever introduced to. Therefore, he occupies a very special place in my heart, but enough about me. I’m sure you all want to know if the show received the Nalyce stamp of approval. To answer your curiosity, it did. More specifically the newer episodes did; she wasn’t as impressed with the older animation style of the classic episodes. I was the opposite; I found the newer animation that featured bigger heads and smaller bodies made a lot of the characters movements during the action sequences over-the-top.

A pivotal episode for me (as well as Nalyce) was the “The Impossible Summit of Mt. Neverrest!” This episode addressed the topic of overcoming adversity, as it featured Scrooge McDuck returning to conquer an obstacle that bested him in his first attempt. It’s like when you tell your kid when he got cut from a sports team about how Michael Jordan was first cut, or how Alex Morgan was cut from her soccer team (just a little tie-in to my previous review Alex and Me; be sure to check it out). This allowed me the opportunity as a parent to impart a valuable life lesson to my daughter, who quickly rolled her eyes and told me to start the next episode.

The key takeaway for this disc is that I guarantee that you won’t be able to think of Ducktales, without immediately following it up with, “Whoo-hoo.” Courtesy of the show’s theme song, which thankfully remained unchanged for the most part.  Trust me you will be walking down the street and the song will just overtake you. It is that infectious, and no age is immune. My daughter is actually doing it as we speak.

Jeremy Butler is a film school graduate of the International Academy of Design and Technology. He is been writing for Upcomingdiscs since 2012; however, movies have played a big part of his life for much longer. Favorite genres include horror, science fiction/fantasy, and comedy. Favorite movies are V for Vendetta, Boondocks Saints, Kiss Kiss Bang Bang, and The Godfather.
Jack Reacher (UHD Blu-ray) (4K) Unsane (UHD Blu-ray) (4K)