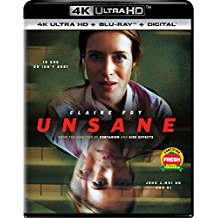 Remember when Steven Soderbergh told us he was retiring from filmmaking? Since that time he has been behind two of Hollywood’s most unique films in a long time. Lucky Logan was a refreshing kind of heist film that made it more of a comedy with wonderful character studies. Now comes Unsane, which employs a completely unique form of filmmaking itself. The entire film was shot basically on an iPhone. That’s not entirely true, because he did use various lens configurations that aren’t exactly standard on the typical cell phone. Still, he used the phone as the actual digital recording device. What makes this more unique is that he did this to produce a near-normal film and not the expected “found footage” kind of project that one would expect from a movie made on a cell phone. All of this made me extremely skeptical going in, and I’ll admit to avoiding the film a bit. When it arrived on UHD in 4K/HDR, I was even less interested in seeing the results. I don’t mind admitting here that I was rather surprised at the film I ended up seeing.

The plot of the film is actually quite compelling. Claire Foy does a tremendous job of playing Sawyer Valentini. Sawyer has just started a new job in a new town, and she’s impressing her boss and coworkers. But when a date goes badly, we discover that Sawyer is a badly damaged woman who is here because she’s running from a stalker. She’s suffering a kind of PSTD that isn’t always evident on the surface. She does the right thing. She goes to a facility to talk to a therapist about her issues. The next thing she knows she’s given papers to sign, which she does without actually reading them. There’s definitely a lesson to be learned here, and Sawyer learns it the hard way. She’s discovered that she’s voluntarily committed herself for a week at the facility. But before you can say One Flew Over The Cuckoo’s Nest, things get intense and much worse for Sawyer. It appears she might be the victim of an insurance scam that could keep her here until her insurance coverage literally runs out. She’s also confronted by the man who has been stalking her, who could now be working on the hospital staff.

Of course, the compelling part of the film is that we see almost everything from Sawyer’s perspective. That means we can never be sure what is real or not. The use of these unconventional lenses and warped perspectives assists the film in portraying the world in a fashion in which we don’t know what is actually happening. We only know that she feels trapped in a mental facility with the person who has caused her condition now with incredible power over her. But is it real?

While there is a pretty strong supporting cast here. It’s Foy who carries the large weight on her own capable shoulders. There are no clues in the performance as to what her mental state really is. Yes, there are the warped perspectives, but we aren’t sure if they’re real or drug-induced. She doesn’t give away the surprises, which appear as fresh and revealing to the character as they do to us. That’s a hard one to pull off, but Claire Foy literally makes all of this work.

We have Joshua Leonard as either David, her stalker, or George, the orderly. He’s also pretty good at not giving away too much. Amy Irving provides an underutilized performance as Sawyer’s mother. The rest of the cast are well-placed set pieces who add to the authenticity of the film. Then there’s Jay Pharoah as Nate, who becomes somewhat of a confidant for Sawyer. Like Sawyer, we never get to know very much about Nate beyond the fact that the two characters generate some nice chemistry. Much is revealed by the end, but Pharoah is also a compelling element in the film.

Soderbergh makes this film all about the composition. I’m not sure how much of this has to do with the equipment beyond the odd lenses used. But the atmosphere of the institution is created with wonderful texture. Soderbergh lingers in this world a bit and allows you the time to take it all in at a slow enough pace that never drags down the plot. It’s almost as if he’s daring you to solve the puzzle or sus out the flaws. It’s a bit of a magic trick that works. He does pretty much “clean” everything up for us by the end, so you do actually get the answers whether you were wanting to have them or not.

Unsane  is presented in a somewhat odd aspect ratio of 1.56:1. The ultra-high-definition 2160p  image is arrived at by an HEVC codec with an average bitrate of 55 mbps. It’s reported that the film, while shot on an iPhone, was recorded at 4K. I can’t speak to that. I can only say that this ultra-high-definition image presentation does not look like what it is reported to be. The image is as sharp as anything I’ve seen recorded on better digital cameras. The colors are a bit “off”, but that’s all pretty much by design. There’s an ultra-warmth in the hospital images with a very yellow tint to it all. Some of the outside world looks pretty normal with reference colors, while some sports odd tints like heavy purple-tinted woods in the film’s intro. The black levels are where you might find any of the weaknesses you might expect from the source material. But I have to be clear here. This is not a “found footage” film and does not contain shaky camera work or intentionally amateurish appearance.

The DTS HD-MA 5.1 track was never intended to be aggressive. Most of this film takes place in a cramped space, and that’s exactly what is served here. It’s the dialog with just traces of ambient f/x that come out in nice clarity with few frills. And clear it is. You’ll hear the buzzing of the oppressive fluorescent lights to the point of annoyance. It’s not something you would expect to be immersive, but surprisingly, it is.

The extras are all on both the Blu-ray and UHD copies of the film:

Unsanity: (4:26) This making of feature is just as unique as the film itself. You will see behind-the-scenes footage without any narration or cast and crew interviews. It’s all fly-on-the-wall stuff with the actual audio from the film itself.

I suspect that there really is no retirement at this point in Steven Soderbergh’s career. If the last two films are any indication, that could be a good thing. He appears to be at a comfort level where he’s willing to experiment. And I’m not talking that high-artsy experimentation that is hard to relate to. This stuff is quite accessible, yet refreshing at the same time. So it appears that Soderbergh has returned in order to play out a few ideas. “Why not?”

Gino Sassani is a member of the Southeastern Film Critic's Association (SEFCA). He is a film and television critic based in Tampa, Florida. He's also the Senior Editor here at Upcomingdiscs. Gino started reviewing films in the early 1990's as a segment of his local television show Focus. He's an award-winning recording artist for Omega Records. Gino is currently working on his 8th album Merchants & Mercenaries. Gino took over Upcomingdiscs Dec 1, 2008. He works out of a home theater he calls The Reel World. Favorite films: The Godfather, The Godfather Part II, The Body Snatcher (Val Lewton film with Karloff and Lugosi, not the pod people film), Unforgiven, Gladiator, The Lion King, Jaws, Son Of Frankenstein, The Good, The Bad And The Ugly, and Monsters, Inc.
Ducktales: Destination: Adventure Forrest Gump (UHD Blu-ray) (4K)