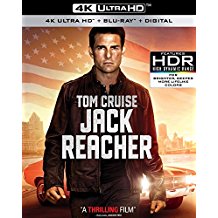 We’ve found him. The character of Jack Reacher comes from a series of thriller novels written by Lee Child. From the very start you know that this is going to be a different kind of Jack Reacher than fans have come to know and love from the books. He’s described as being 6′ 5’’ and about 250 pounds. Tom Cruise doesn’t really fit any of those description elements. He does, however, fit two very important descriptive elements when it comes to Hollywood. He’s still a big name and a pretty reliable box office draw. He also put up some of his own cash to produce the movie. Now that’s how you get cast for a part very physically different from yourself.

In the aftermath of the shooting the police grab their suspect, and he’s beaten in the transport van and put into a coma. Before he was attacked, he said only one thing. He would only talk to Jack Reacher (Cruise). The two have history. The suspect James Barr (Sikora) shot some folks while in Afghanistan outside of the theater of war. Reacher was the military cop assigned to the case. The military buried the story when it turned out he really did kill some bad guys without knowing it. Reacher now has it in for him and shows up at the police station just as the D.A. Rodin (Jenkins) and lead detective Emerson (Oyelowo) are trying to figure out how to find him. Barr is being defended by Rodin’s daughter Helen (Pike), and she hires Reacher to help investigate the case, knowing that he’s actually got it in for her client. But Reacher is actually an honest and fair guy who looks into the situation only to find something isn’t right. As if to confirm his suspicions, there are folks trying to kill him. When that doesn’t work, they frame him for murder. Turns out he’s interfered in a bigger plot by an enigmatic villain with most of his fingers chopped off. He’s called The Zek (Herzog). He’s a former Russian criminal and convict, and he’d like to see Reacher out of the way.

Beyond the focus on sniper activity and shooting, there are many standard thriller/action elements to be found here. Cruise engages in one of the better car chases I’ve seen in a couple of years. But the film doesn’t rely too heavily on just the action stunts and a lot of shooting. The best thing about this film happens to be the cast. Yes, purists won’t like Cruise in the role, but he really plays it well. Lately, Cruise has found himself in some off-the-wall films playing odd characters. This is a return to real drama and a more serious character for Cruise. The result just might be my favorite Cruise performance to date. I did not read the books, so I do not carry the baggage of character preconceptions. All I can say is that Cruise delivers a balanced character who can be both deadly serious and quite light and flippant as well. It’s certainly his most balanced character in years. There’s a wonderful phone conversation where Reacher delivers a speech very much like Neeson delivers in the first Taken to the kidnappers as they are grabbing his daughter.

Cruise isn’t left to carry the burden alone. I’ve loved Richard Jenkins since Six Feet Under. This is a guy who really deserves more meaty parts. He almost gets it here. The only thing wrong with the part is that there just isn’t enough of it. I don’t always buy Rosamund Pike as much as I’d like to, but I was happy that the film avoids the expected forced romantic elements here. There’s a clever scene that actually pokes some fun at that convention. David Oyelowo is a scary dude here. Any hero is only as good as his nemesis, and Oyelowo makes it easy for Cruise as Reacher to put in a solid showing. This is the kind of bad guy who really doesn’t need to say much to get the point across. Finally, the cast includes a wonderful showing by Robert Duvall as a gun range owner who teams up with Reacher in the film’s energetic climax.

Jack Reacher is presented in an aspect ratio of 2.35:1. The ultra-high-definition 2160p  image is arrived at by an HEVC codec with an average bitrate of 55 mbps. The ultra-high-definition format really comes alive when the source is film. The 35mm shoot is a native 4K. You get just the right amount of grain that gives you the filmatic atmosphere you just can’t reproduce on video. I love digital for a lot of kinds of projects, but a movie like this thrives on film. The extra resolution and sharpness adds to details like gunpowder and brass shavings in the early part of the film. A lot of this film uses macro lenses, and that close-up look is quite sharp. You get wonderful detail down to the ridges of a quarter that is a key piece of evidence. Colors are natural and never overly bright or ultra-realistic. Black levels are wonderful, allowing perfect shadow definition except when McQuarrie doesn’t want you to see that clearly in the shadows. Shots of the locations bring back memories of time I spent on those same Pittsburg roads. The film captures the lighting of the city perfectly.

The Dolby Atmos presentation defaults to a comfortable 7.1 track. It is everything you could expect. The mix is aggressive and drives the action like a thumping heartbeat throughout. The score pulls you into the action without getting in its own way. The gunfights are totally immersive. Dialog is crisp and clear at all times. The best thing here is the overall mix and volume. I’ve seldom listened to a more perfectly balanced audio presentation. The rain at the climax offers a wonderfully immersive experience. It’s not just the rainfall, but you get the sounds of ground and metal roofs that ping with each drop. The first several minutes of the film have no dialog, and it’s the rest of the audio design that carries you into the film.

There are two Audio Commentaries. The first features Tom Cruise and Director Christopher McQuarrie. It’s rare for a commentary to be worth a quick second run through the movie. This one is. It’s incredibly informative, particularly for a guy like me who wasn’t all that familiar with the books. I feel like I have a much better understanding of just who Jack Reacher is. You can tell the two work well together and enjoy each other’s company. The second commentary is with composer Joe Kraemer. He doesn’t talk all of the way through. Much of it is pretty much an isolated score, giving you ample opportunity to listen to the pounding music.

The film has already had a followup, and I suspect more are coming. There’s a franchise here, to be sure. If you’re a little tired of the usual conventions and clichés, “There’s a Jack Reacher here to see you.”

Gino Sassani is a member of the Southeastern Film Critic's Association (SEFCA). He is a film and television critic based in Tampa, Florida. He's also the Senior Editor here at Upcomingdiscs. Gino started reviewing films in the early 1990's as a segment of his local television show Focus. He's an award-winning recording artist for Omega Records. Gino is currently working on his 8th album Merchants & Mercenaries. Gino took over Upcomingdiscs Dec 1, 2008. He works out of a home theater he calls The Reel World. Favorite films: The Godfather, The Godfather Part II, The Body Snatcher (Val Lewton film with Karloff and Lugosi, not the pod people film), Unforgiven, Gladiator, The Lion King, Jaws, Son Of Frankenstein, The Good, The Bad And The Ugly, and Monsters, Inc.
Tuesday Round Up: June 26, 2018 Ducktales: Destination: Adventure