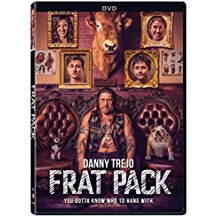 “Welcome to North Dakota, the least visited state in America.”

Yeah, that’s what you want to hear when you go to visit a place. I mean, according to Frat Pack, entertainment is so scarce that you have to kidnap a person as a first impression. Well, then again, as first impression goes, I can’t imagine a better one to set up the kind of movie you are watching. Frat Pack is a story in the vein of Animal House. Let me be clear, I am not putting it in the same league as Animal House, just merely pointing out their similar genres. Needless to say, this film had my attention from the very beginning as our main character initially goes looking for a bathroom and finds himself on the receiving end of a hilarious S&M session. Albeit cheesy in some areas, Frat Pack is very entertaining for the most part. However, it is definitely not something that you can watch with your significant other (unless they have that kind of sense of humor) or with children.

Elliot is fresh out of college, forced to move back in with his mom after being without a job and dumped by his girlfriend. One morning, his mother (Beverly D’Angelo) informs him that she has met someone that she plans to marry a man who I must say given their personality types is her perfect match. In a nutshell, they are both characters without boundaries, which makes for some great awkward moments; especially for Elliot. At the behest of his mother, Elliot plans to go to Bismarck to meet his soon-to-be stepdad, and from the moment they meet, he probably regretted ever stepping on the plane.

Upon meeting his future extended family, Elliot finds himself invited along on the group’s Alumni Weekend road trip. Needless to say, I am surprised that he survived the trip to the college, especially after the incidents at the gas station as well as a Tattoo shop owned by a guy named Dirty. Seriously, why would you ever get a tattoo from a guy named Dirty? Regardless, he makes it to the party, and it is the rager that was advertised. Of course, that encounter at the property is guaranteed to be something to remember. With every road trip, there needs to be that one friend who drags everyone else into messed-up situations. For Frat Pack, that person is Joey (Brendan Michael Coughlin), and he is very good at his job. For me, he is the breakout star of this film. It’s not that he is extraordinary; it’s that he’s so good at playing a completely moronic poser that he makes you eager to see what he will say or do next.

Going into the film, the only familiar face I was expecting to see was Danny Trejo, but to my excitement, Robert Knepper appeared as a heavily-armed drug dealer known as Kush, who insists that the group partake in a smoke session with them and ends up slipping into a paranoid state that sends the group running away from a stream of bullets.  Then there was the addition of Tommy Davidson. I was definitely not expecting to see him preaching about the last supper.

Well, if I had to sum this movie up in one word, that word would be raunchy, and as a public service announcement, if you don’t have a strong stomach, you may want to be wary, as the movie does feature a group projectile-vomiting scene, among other things. Yep, that one snuck up on me, and let’s just say I was grateful for my strong constitution. And trust me, the hits just keep coming. As I said, do not watch this with your significant other (unless she has that sense of humor) or children in the room.

Jeremy Butler is a film school graduate of the International Academy of Design and Technology. He is been writing for Upcomingdiscs since 2012; however, movies have played a big part of his life for much longer. Favorite genres include horror, science fiction/fantasy, and comedy. Favorite movies are V for Vendetta, Boondocks Saints, Kiss Kiss Bang Bang, and The Godfather.
Tyler Perry’s Acrimony (Blu-ray) Mission: Impossible 2 (UHD Blu-ray) (4K)