Posted in: Disc Reviews by Gino Sassani on July 5th, 2018 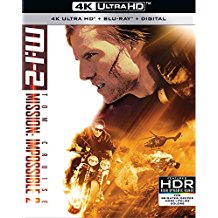 “This is not Mission: Difficult, Mr. Hunt. It’s Mission: Impossible. Difficult should be a walk in the park for you.”

After four years and nearly $200 million at the box office, it was only a matter of time before Paramount and Tom Cruise would partner again for a new Mission Impossible film. This time the move would be completely toward the action and stunts and farther away from the television series. The hiring of John Woo to direct the second film put quite a punctuation mark on that move. This time there would be no mistake. Mission: Impossible 2 would be a no-holds-barred action adventure across the globe, and with Tom Cruise once again doing the majority of these hair-raising stunts himself, much to the concern of the new director and crew. The stakes had to be higher, and Woo was the perfect choice for that kind of film.

This time out the McGuffin would be a bio-weapon. This would also be the only Mission: Impossible film where Hunt is working as an agent for the entire film. In all of the others he’s had to go rogue ala Jason Bourne with elements inside the IMF trying to bring him down. Hunt (Cruise) is also told to recruit a civilian master thief for the team in the person of seductive crook Nyah Hall, played with style by Thandie Newton. Back is newly returned from the disavowed list Luther Stickell, the computer hacker and tough guy played by the returning Ving Rhames. There’s instant chemistry between Rhames and Cruise that goes back to the first film and beyond. There’s a reason that Rhames remains the only other actor to appear in all of these films. The two of them are really good together, and that relationship along with the stunts covers a multitude of sins, or shall we say holes in the plot itself.

Another disavowed agent named Sean Ambrose (Scott) is the bad guy who intends to bank some serious coin off the bio-weapon Chimera. This film is a lot tighter than the first, with a more limited number of characters and a lot less of the double-crosses and triple-crosses that made the first film a bit hard to follow. This time Woo uses a more limited cast but keeps everything so quickly in motion that you’re getting much more of an amusement park ride out of the experience. It is this film that pretty much sets the tone for everything that follows. It’s Woo’s expert handling that allows this film to rise considerably above the first and made the long-running franchise far more mission: possible.

There’s little question that this film plays out more like a James Bond adventure than anything the 1960’s show was about. We do a lot of globe-trotting that takes our adventure from exotic place to exotic place. Thandie Newton would fit in with the best of the Bond girls. She has good chemistry with Cruise  and she’s such a nice combination of tough and seductive that it’s rather easy to imagine her in a Bond film. Anthony Hopkins shows up as the film’s answer to M, and I’m disappointed that thread did not continue. Hopkins and Cruise added to the development of the film’s characters.

There’s also a quite dramatic transformation in the character of Ethan Hunt that stands out here. In the first film Hunt wasn’t all that likable, and he often appeared out of place in the spy environment. Woo works some pretty high-end magic, and we see born, or is it Bourne, the hero that populates the rest of the films in the franchise. He’s turned on the charm, but not as much of the arrogant charm that Cruise often displays. The character makes connections with other characters, and the decision to make the climactic encounter a pretty much one-on-one fight was a brilliant move that builds on the personal nature of the character. Now it’s a little bit easier to sit on the edge of our seats, actually caring what happens to Hunt when he’s dangling from a mountain or leaning from a motorcycle while he’s shooting the bad guys at top speed. None of that works half as well on the Hunt we met in the first film. But this new and improved Hunt takes us along on his crazy stunts. For me, this is where the franchise really begins.

Mission: Impossible 2  is presented in an aspect ratio of 2.40:1. The ultra-high-definition 2160p  image is arrived at by an HEVC codec with an average bitrate of 65 mbps. You’ll get a quick glimpse of how much better this ultra-high-definition image presentation is as soon as the film begins. The shot of Cruise climbing the mountain/butte is a beautiful thing. The added resolution finally pays off the choice to have Cruise actually doing the stunt. The image here holds it together with wonderful contrast and color of the desert sky and mountains. There are so many nuanced colors here that the HDR and Dolby Vision truly delivers. Again there is minimal DNR so that grain continues to add a nice organic element to the film. This film adds a greater element of texture that didn’t exist so much in the first film. Close-ups grant you that intimate feel that only works with the bump in resolution and detail. Black levels are pretty solid. The shadow definition is high, and the contrast makes it all a very rewarding image presentation.

The DolbyTrueHD 5.1 track isn’t Atmos or DTS:X. There’s no 7.1 enrichment here, and I still find that a bit of a disappointment. Don’t get me wrong. There’s a lot to like here, and it can get quite immersive. Still, again it’s the subs that have to deliver the full effect of this audio presentation. The iconic theme is a bit too thumpy in this particular film, but there’s no question that the score and action will get your adrenaline pumping. Dialog still cuts through all of the aggressive sound, and the surrounds themselves do deliver more ear candy than the first film.

There is an Audio Commentary by director John Woo.

The extras are all on the 2nd Blu-ray copy of the film and are also mostly standard definition with nothing new added for this release.

Behind The Mission: (14:28) Mostly Cruise-driven as he talks about the choice to hire John Woo to direct. A few clips with mostly talking heads.

Mission: Incredible: (5:12) An extension of the first feature that was cut to avoid royalties. This one focuses on the locations and stunts.

Impossible Shots: (34:17) These are scene breakdowns. There are 11 scenes with a play-all option.

There is a 37-second alternative title scene and a reproduction of the Cruise tributes found on the first disc.

Fall-Out is almost upon us, and these 4K releases by Paramount are a good chance to watch the franchise evolution and to get in the mood for more action. Tom Cruise might be over 20 years older now, but he’s still doing a large number of the stunts. He was seriously injured on the set of the sixth film, but that hasn’t appeared to put a damper on anything. I suspect if the money is there, and I’m certain it’s going to be, that the mission will be to “keep it going”.

Gino Sassani is a member of the Southeastern Film Critic's Association (SEFCA). He is a film and television critic based in Tampa, Florida. He's also the Senior Editor here at Upcomingdiscs. Gino started reviewing films in the early 1990's as a segment of his local television show Focus. He's an award-winning recording artist for Omega Records. Gino is currently working on his 8th album Merchants & Mercenaries. Gino took over Upcomingdiscs Dec 1, 2008. He works out of a home theater he calls The Reel World. Favorite films: The Godfather, The Godfather Part II, The Body Snatcher (Val Lewton film with Karloff and Lugosi, not the pod people film), Unforgiven, Gladiator, The Lion King, Jaws, Son Of Frankenstein, The Good, The Bad And The Ugly, and Monsters, Inc.
Frat Pack Ant-Man and The Wasp