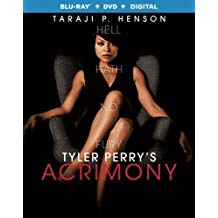 “Every time a black woman gets mad, she’s a stereotype.”

Taraji P. Henson has been a very good and versatile actress for a long time, but she didn’t become a star until she started getting very angry on screen. Her breakout role came in 2015 courtesy of Fox’s Empire, in which Henson’s Cookie Lyon has been known to get into some scraps. So it made sense for Henson to bring her talent for tantrums to the big screen with the help of a filmmaker who once directed a movie called Diary of a Mad Black Woman. Writer/director/producer Tyler Perry seems to be going for “trashy fun”…unfortunately, he only gets halfway there.

“Well, let’s start at the beginning…”

Acrimony opens with Melinda Moore (Henson) being scolded by a judge in court following a pattern of unspecified harassment. Before throwing her in jail for violating a restraining order, Melinda speaks to a psychologist and starts to reveal why she’s so uncommonly angry. The film then flashes back to Melinda in college (played by Ajiona Alexus), which is when she meets handsome mechanical engineering student Robert Gayle (Antonio Madison). Robert lives in a trailer and comes from the “wrong side of the tracks,” while Melinda recently came into a sizable inheritance due to the death of her mother. As a result, Melinda emotionally and financially supports his (pricey) dream of inventing and developing a self-charging battery, even after she catches Robert hooking up with another woman.

“You cannot negotiate with crazy.”

Melinda and Robert (played by Lyriq Bent in his later years) get married, despite the fact that the spark is long gone from their relationship. The couple suffers severe financial hardships over the next couple of decades that eventually spill over and affect the rest of Melinda’s family. If all that wasn’t bad enough to earn Melinda’s scorn and wrath, a series of events flips Robert and Melinda’s fortunes…and leaves Melinda with an unquenchable thirst for revenge.

“You know me…you know I can be the motherf—ing devil.”

Perry has the tools for an enjoyably trashy thriller centered on a scorned woman: a 21st century Fatal Attraction aimed at African American audiences. Unfortunately, Acrimony doesn’t have anything that comes close to the electric chemistry Glenn Close and Michael Douglas had in Fatal Attraction. In Acrimony, Melinda (through Henson’s pained voiceover) talks about falling in love with Robert’s charm and handsomeness. It’s a good thing that voiceover is there because the alleged spark between the two characters isn’t really evident on screen.

To her credit, Henson’s forceful line readings are perfect for Perry’s characteristically melodramatic script; the actress wrings some unintentional comedy out of the over-the-top material. But since Henson only plays Melinda as Robert’s fed-up, bitter wife, the performance ultimately ends up being stagnant and unpleasant. (Close, on the other hand, slowly revealed her crazy side in Fatal Attraction.) Bent has the chops to be a likable leading man…which is why it’s such a shame that he’s stuck playing Robert, who is a clueless drip as an adult. Alexus (who also plays the younger version of Henson’s character in Empire) comes off as too sweet and passive to evolve into Henson’s hardened persona. Madison’s performance as Young Robert is more in line with what Bent ends up doing. Meanwhile, Ptosha Storey gets in some solid one-liners as Melinda’s sister Brenda, who disapproved of Robert from the very beginning. (Wait, is she the hero of this story?)

Perry doesn’t do his cast or the story as a whole any favors with some of his filmmaking choices. Acrimony is actually divided into several segments that reflect Melinda’s current state of mind. (The others are “Sunder,” “Bewail,” “Deranged,” and “Inexorable.”) The problem is that the opening “Acrimony” segment is longer than the other four combined, which makes the whole exercise kinda pointless. I did enjoy the idea behind the money tracker Perry displays on screen to show us the state of Melinda’s dwindling inheritance. But Perry also botches this neat idea by yadda-yadda-ing huge chunks of expenditures that result in the couple falling into debt.

Acrimony makes it very clear early on that Melinda suffers from borderline personality disorder — her response to catching Robert with another girl in his trailer is, um, extreme — while Robert comes off as a meek, well-meaning screw-up. So it’s impossible to feel bad for Robert because he might be a snake who really does bring a lot of Melinda’s wrath upon himself. You also can’t really side with Melinda because she’s a raving lunatic. In other words, Perry had made a two-hour movie — easily 20 to 30 minutes too long, by the way — where you neither care about nor like either of the two main characters.

Acrimony is presented in an aspect ratio of 2.40:1. The 1080p image is arrived at with an AVC MPEG-4 codec at an average of 36 mbps. The film’s palette is slightly chilly and desaturated, and that’s especially the case during the present-day scenes with Henson and Bent playing Melinda and Robert. The image becomes slightly warmer during the early flashback scenes with the two main characters meeting and falling for each other in college, but you should look elsewhere if you’re looking for a bright and sunny picture. (Of course, the fact that this movie is called Acrimony is probably your first clue that you’re in for something pretty dark.) Black levels are fine — which is especially important during the climactic (and preposterous) nighttime yacht ride — but overall this is a clean and blemish-free image that is more solid than eye-popping.

The DTS-HD Master Audio 5.1 track is dialogue-driven, which isn’t surprising given that Perry isn’t the most cinematic filmmaker. That being said, this track still managed to be somewhat of a letdown. I don’t mind that there isn’t a ton of activity coming from the rear speakers and subs: in fact, the subs provide an impressive thump during the sequence where Melinda takes out her rage on Robert’s trailer, while the sound field as a whole (including the rear speakers) swells nicely whenever we get a Nina Simone tune. However, I expect balance to be precise on a dialogue-driven track where not much else is going on, and that simply isn’t the case here. The most egregious offense is the balance on Melinda’s voiceover narration: whenever Henson’s voice cuts in from the present day, it’s much too loud and forceful compared to the baseline track. I realize that may be an issue related to the film’s production (and not this disc), but it’s nevertheless somewhat distracting and annoying.

Unleashing Acrimony: (10:46) Pretty standard behind-the-scenes featurette. Writer/director Tyler Perry talks about wanting to tell a story about people who can’t let go when they feel they’ve been betrayed and reveals that Taraji P. Henson was his only choice for the lead role. (Acrimony was shot in 8 days, since Henson was simultaneously working on Empire.) Meanwhile, Henson refers to this movie as her “Glenn Close in Fatal Attraction” moment. Presented in HD.

It’s no wonder Tyler Perry keeps throwing on the Madea wig and glasses: the films that he makes without the gun-toting grandma feature all the overwrought melodrama of a Perry production with absolutely none of the fun and looseness that Madea brings. Acrimony is no exception.

It’s a shame because this movie has a game and powerful leading lady ready to chew into some pulpy material. Too bad she got stuck in a movie full of bafflingly unlikable and irritating characters. In short, I’m not mad at Acrimony for being dumb and bad…I’m mad at it because dumb, bad, and no fun at all.