Posted in: No Huddle by Brent Lorentson on August 8th, 2018 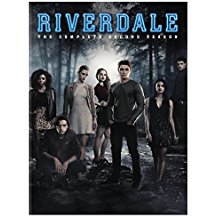 You have to go back to the early 40’s for when Archie, Jughead, Betty and Veronica first appeared in comic book form.  Over the years, though, their characters have changed with the times, though the town of Riverdale always seemed to maintain an innocent charm where nothing bad ever seemed to happen. Well, that is until recently where the comics took a shift and thrust our characters into various scenarios, one even including Riverdale being overrun by zombies. These changes occurred when Roberto Aguirre-Sacasa took over the brand, and now he has brought the town of Riverdale and its inhabitants to the small screen for the CW network.  Though this iteration differs from the early days of the Archie comic universe, all the familiar characters are here, and they are showing us the shady underbelly of Riverdale that I’m so glad we are getting a glimpse of, one episode at a time.

When Season 1 left us, we were with Archie (K.J. Apa), and his dad, Fred Andrews (Luke Perry) lay bleeding in Pop’s Chocklit Shoppe after a “botched robbery”. Season 2 picks up right where the previous season left us and wastes no time ramping up the danger in town as a mysterious killer dubbed “The Black Hood” begins killing off the residents of Riverdale.  Wanting to protect his town and his friends, Archie forms a group called The Red Circle. As you can expect, this glorified neighborhood watch group is simply a recipe for disaster, but also entertaining television. While Archie is on the hunt for “The Black Hood”, Betty (Lili Reinhart) finds herself caught up in the mess as well as the killer plays a sort of cat-and-mouse game with her by leaving her clues to their identity. Jughead (Cole Sprouse) is keeping busy this season, as he’s relocated to Southside High and he is adjusting to his life while becoming a member of The Serpents. Personally seeing how Jughead evolves as a member of the Serpents, from his gang initiation to the power struggles we see develop over the course of the season, is one of the best things going for this season. Finally we have Veronica (Camila Mendes) who is adjusting to her father’s early release from prison and coming home to continue with “The Family Business”.  As you can imagine, Season 2 is loaded heavily with material for our characters, and there is so much that continues to work its way into the story that it almost never hits a lull.

The front half of the season is definitely the stronger half of the show, but that doesn’t mean everything in it works.  If anything my biggest complaint goes into how we don’t get to see enough of Archie and Jughead together. Thankfully, the dynamic of Jughead and Betty works enough so that it doesn’t hurt the characters, but Archie and Jughead are supposed to be best friends, and we just don’t get to see that much here, and for what Archie goes through, well, clearly he needs some of Jughead’s common sense.  Instead of going to Betty or Jughead, we see Archie spending a lot of Season 2 attempting to impress Veronica’s father, Hiram Lodge (Mark Consuelos).  It would be one thing if Archie was just looking for approval from Hiram since he is dating his daughter, but the show takes it a bit to far as they have Archie working his way into the business.  I’m sorry, but Archie attempting to be a gangster is just too over-the-top for me.  This storyline becomes a bit too much as the second half of the season delves into Hermione Lodge (Marisol Nichols) running for Mayor of Riverdale against Fred Andrews, and Archie manages to stick by the Lodges’ side and not his father’s.  Sorry, but I just have a hard time believing Archie wouldn’t stick by his dad’s side from the get-go on this.

Taking a back seat this season but stealing just about every scene she has, Cheryl Blossom (Madelaine Petsch) is still recovering from the loss of her twin and discovering her father killed her brother.  Despite how loathsome Cheryl can be, I can’t help but love this character, and it seems Petsch seems to be having a blast playing this femme fatale.  I really like that the writers are not making her a victim and instead  have been allowing this character to evolve. As for the direction they take for her love interest, I didn’t see it coming, and I loved it.  Though she may not be considered a main character by some, the development of Cheryl from Season 1 is definitely the most complex that we’ve seen on the show.

As for Betty, the second half of the season introduces us to Chic (Hart Denton), who may or may not be her long lost brother, who also turns out to be a new threat for her and her family.  While it is a bit of a stretch to see Betty thrust into another dangerous and traumatic situation so soon after her involvement with “The Black Hood”, this storyline seems more suited for the world of Riverdale that we were introduced to in Season 1.  The idea of looking into the dark and ugly pasts of these families that from the outside seem pristine, but the reality is at times vulgar; well, this is really where the show shines.

Speaking of where the show shines, some of my favorite moments in this season involve the music.  Though we don’t get much of Josie and the Pussycats this time around, they few moments they are around are a fun reprieve from the show’s more serious tone.  Seeing cast members do a cover of “Bittersweet Symphony” is definitely a high point, along with the amazing cover of “Mad World”.  I don’t want to spoil anything ,but personally the sequence involving the “Mad World” cover is so unexpected that it’s definitely one of the high points of the series for me, period.  This of course brings me to Carrie: The Musical. Ever since Buffy the Vampire had its musical episode, it seems to be a thing a lot of shows have tried to emulate but haven’t quiet managed to nail quite as spectacularly. This may be the closest a show has come since.  This musical episode has many style and tonal shifts from start to finish that long after the series has ended it will be one of the moments I believe fans will often speak fondly about.

At the end of the day will we ever see Riverdale being nominated for an Emmy or Golden Globe?  This is highly unlikely; not every show needs to be aiming for critical prestige.  The show is a fun teenage romp through a dark noir world filled with sex, lies, murder, and singing.  This is the kind of junk food for the mind that is fun to binge and will actually keep you guessing on how things will turn out.  With Netflix putting out an updated version of Sabrina the Teenage Witch, I’m curious if we’ll see these two worlds cross over in the future, but only time will tell on that one.  It’ll only be a matter of weeks before Season 3 of Riverdale kicks off, and I’m curious to see where the show will go from here and if we’ll ever get to see Archie sing “Sugar, Sugar”.

Brent Lorentson is a horror writer and film critic based out of Tampa, Florida. With a BA in Digital Film, he co-wrote and co-directed Scavenger Hunt. His short stories have appeared in various horror anthologies. In 2019 his short script Fertile Blood will be a part of the anthology horror film Slumber Party. He is currently working on his first novel A Dark and Secret Place set to be released in late 2019. Favorite Films: Taxi Driver, Fight Club, I Saw the Devil, The Wild Bunch, Dawn of the Dead, A Clockwork Orange, Pulp Fiction, Heathers, The Monster Squad, and High Fidelity.
Edward II (Blu-ray) Life Of The Party (Blu-ray)