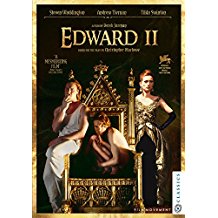 “My knee shall bow to none but to the king.”

In 1996, Aussie filmmaker Baz Luhrmann unleashed a star-studded, outrageously modernized version of “Romeo and Juliet” that retained William Shakespeare’s original language while replacing the story’s swords with gleeful gunplay. But five years earlier, Derek Jarman — an English director who left his mark on both stage and screen — beat Luhrmann to the Elizabethan punch with an even more provocative update of “Edward II,” a play written by Shakespeare contemporary Christopher Marlowe.

“This Edward…is the ruin of the realm.”

Edward II (Steven Waddington) has just ascended to the English throne, and one of his first acts as king is to summon banished friend and lover Piers Gaveston (Andrew Tiernan) to be by his side. The move proves to be an unpopular one even before Edward starts lavishing Gaveston with lucrative titles and neglecting his royal responsibilities.

“My lord…these titles far exceed my worth.”

Not surprisingly, Edward’s wife Isabella (Tilda Swinton) is severely vexed by Gaveston’s presence. She starts plotting with Edward’s enemies at court — including the powerful and vicious Lord Mortimer (Nigel Terry) — to rid themselves of Gaveston, overthrow Edward, and install her own son Edward III (Jody Graber) on the throne instead. Oh yeah…I suppose I should emphasize the fact that this story is told with the help of modern dance and copious amounts of male nudity to complement Marlowe’s original dialogue.

As a result, Edward II is hailed as an “iconic New Queer Cinema classic” on this Film Movement Blu-ray release. Some of Jarman’s additions to Marlowe’s story range from gratuitous (the two naked men going at it in the background during Gaveston’s introductory scene) to downright head-scratching (um, the contemporary dance). But the majority of the director’s flourishes pop in a good way, most notably the chic wardrobe choices that make the main characters seem like they just stepped out of a New Wave song. (Jarman directed several Pet Shop Boys videos during the 1980s.) The best and most effective example of new meeting old is the use of Annie Lennox’s “Ev’ry Time We Say Goodbye”…featuring an appearance by Lennox herself to perform the tune! It’s out of place in a way that feels just right.

More importantly, Jarman — who co-wrote the feature film adaptation with Ken Butler and Stephen McBride — maintains an impressive amount of storytelling clarity even while sticking to the story’s Elizabethan speech. The film’s bold staging and visual cues go a long way toward helping the viewer understand what’s happening, even if you can’t always follow exactly what the characters are saying.

I do wish, however, that the film had further fleshed out the passionate relationship between Edward and Gaveston. I realize part of the problem is that history itself likely provides very little documentation regarding the relationship between the royal and his rascally companion. But as it is presented in Edward II, the king and Gaveston are simply obsessed with each other and…that’s all there is to it.

Waddington and Tiernan have decent chemistry, but it’s not fiery enough to make up for the gaps in the script. Waddington looks the part of a clean-cut, lovestruck king, and the actor gets a nice arc as the things Edward cares about are slowly stripped away. Tiernan has an impish, bad boy charm as Gaveston, but the character is so much of a power hungry clown that it made me feel like the other members of court would’ve plotted against him even if he’d been a woman. Swinton absolutely shines as the icy Isabella, who also has desire and genuine hurt simmering beneath the surface. (It’s not hard to see why she became a successful, Oscar-winning actress.) Be sure to look out for Game of Thrones actor Jerome Flynn (who plays Bronn of the Blackwater) as Edward’s concerned brother Kent.

Jarman eventually connects Edward II’s oppression with that of his gay contemporaries in the early ’90s, which doesn’t feel like much of a stretch. The film nods at the real-life king’s tragic fate while proposing a more hopeful and romantic alternative. It’s a fitting touch for a movie that so radically re-casts history.

Edward II is presented in an aspect ratio of 1.85:1. The 1080p image is arrived at with an AVC MPEG-4 codec at an average of 36 mbps. Jarman and cinematographer Ian Wilson lean into the story’s stage origins: the entire thing takes place in about a handful of very sparse locations with oppressively black backgrounds. That means the black levels here have an inordinate amount of responsibility, and I’m pleased to report they deliver an inky, layered background image that makes Jarman’s more outrageous flourishes pop. Overall, the image is pretty clean and blemish-free — no small thing for a nearly 30-year-old film shot on a limited budget — even if there are a few soft spots during close-ups.

The Linear PCM 2.0 stereo track is actually a pretty good fit for the film’s minimalist presentation. That being said, this stereo track packs a pretty impactful wallop right from the beginning, when a gate unlocks with a loud clang the first time we meet Gaveston. That’s just one example of what turns out to be a very dynamic surround sound field. Balance is good, if not pinpoint. More importantly, this is a crisp sounding track that makes Christopher Marlowe’s Elizabethan language really sing.

In addition to the bonus material listed below, this release also comes with “Queenie Queens on Top,” a new essay by Bruce LaBruce featuring a prologue by star Tilda Swinton.

Derek’s Edward: (23:40) Covers the impact of late filmmaker Derek Jarman, who is referred to as a “political and cultural revolutionary.” (We’re told he was also one of the first public figures to reveal he was HIV positive and discuss his condition openly.) We get some good backstory on the project — Jarman absolutely welcomed the unconventional approach to the material — and receive some historical context regarding the way gay men were regarded in the late ’80s/early ’90s. (Which led to the inclusion of British gay rights organization Outrage in the film.) Presented in standard definition.

Movies and TV shows with gay themes and openly gay characters were infinitely less common in 1991 than they are today. (Jarman died in 1994.) That being said, Edward II remains bold and striking even 27 years after its release.

Kudos to Film Movement for bringing the movie to Blu-ray with a solid A/V presentation. (Although some new bonus material would’ve been nice.) This movie is absolutely not for everyone and might leave you scratching your head and rolling (or covering) your eyes during certain parts, but it is worth a look if you don’t mind a little avant garde with your cinema. (And, you know, a bunch of naked dudes.)