Life Of The Party (Blu-ray)

Posted in: Disc Reviews by Jeremy Butler on August 8th, 2018 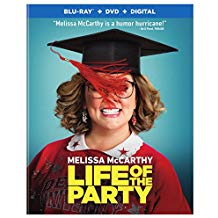 This Melissa McCarthy film flew completely under the radar for me, with me only hearing a few whispers about it. Ironically, I expected to see her in more films following the conclusion of Mike and Molly. Oh well, Life of the Party will have to suffice. Though it was not as entertaining as The Heat or Spy, it had its moments, and exudes the charm that McCarthy has become famous for. I’m sure many of you are like: a movie about going back to college? it’s been done. Not by Melissa McCarthy.

Deanna Miles is a woman who has her world rock as her husband tells her he wants a divorce right after they drop their daughter off for her final year of college. Having dropped out of college in her last year due to becoming pregnant, Deanna is not left with any prospects for how she will support herself. Upon self-reflection about her regret of never finishing college, she decides to enroll at her daughter’s college, to her child’s chagrin.

Now, being a middle-aged woman, you would expect her to have a difficult time with the curriculum or fitting into the ever-changing college culture. However, Deanna transitions into her new life pretty well, with the exception of a few run-ins with campus mean girl (Debby Ryan). Going back to college appears to be best move for her, as she eventually becomes the den mother to her daughter’s quirky social circle as well as embracing her wild side with another college student. It was good to watch Deanna get her groove back, and this hookup ends up becoming even sweeter for her. Not gonna give it away, But I will say is turnabout is fair play. You will understand when you see it. Hopefully you find it as funny as I did.

As I said, Life of the Party is not as entertaining as some of McCarthy’s other films, but it is not without its charms, especially the quirky group that Deanna becomes the den mother of. The funniest one is Gillian Jacobs as Helen. Even now I still don’t comprehend what kind of social disorder she had, but she was usually at the center of jokes. As a whole, this group is what helped make the story relatable as they were all in a transitional period of their lives much like Deanna, who helped inspire them, which in turn inspired her. Speaking of empowerment, the film also has a musical guest who helps the girls be stronger.

Granted I would have liked to have seen Deanna struggle a bit more with embracing this new circumstance, particularly the curriculum. I will say the area in which she did struggle was an important one. It was good that they didn’t shy away from it, and they provide a suitable conclusion for it. It would have also been beneficial to expand on the daughter’s being uncomfortable with having her mom at the same school as her. I mean, her chagrin was a very brief aspect the story. It lasted all of five minutes, and then she was down to clown. In reality, a child at the same school would highly embarrassed and be avoiding their parent like bad credit. Don’t get me wrong; the daughter’s support serves a significant purpose, but it would have been good to have seen more resistance in the beginning.

Life of the Party is presented in an aspect ratio of 2.4:1. The 1080p image is arrived at with an AVC MPEG-4 codec at an average of 30 mbps. I would describe the overall picture as average; however, given the premise of the story I was not expecting anything more than that. Given the real life setting of the film, there is no need for vibrant colors. The brightest thing of the screen is McCarthy’s sunburned skin, which I assume had more to do with a bad spray tan then the coloring of the film.

The DTS-HD Master Audio 7.1 track accomplished the job fine.  Again, there are no explosive sequences or anything like that to tax it, which means there is no need for an immersive experience. To its credit, the film is mixed well and the dialogue is clear and concise throughout the film’s runtime.

80’s Party: (04:51) A behind the scenes featurette regarding the 80’s themed party featured in the film. Intercut with interviews with the cast, specifically about the costume design, which included a throwback to hit television series, Dynasty.

Mom Sandwich: (02:45) A featurette with Melissa McCarthy discussing how her real-life parents were the inspiration for her character’s parents. You want to know why the mom kept offering sandwiches? This will give you the answer.

Deleted Scenes: (46:36) This has to be the largest amount of deleted scenes I have ever seen. I literally did a double take when I saw the runtime.

Bill Hate-O-Rama: (02:44) Another alternative scene montage, this time dedicated to what had to be the most hated person in the cast. Ironic, given that he was just doing a cameo.

Though Debby Ryan was kind of tame for the mean-girl character, the film overall was very enjoyable. Melissa McCarthy continues to spread her brand of comedy and the audience is unlikely to walk away from the film disappointed.

Jeremy Butler is a film school graduate of the International Academy of Design and Technology. He is been writing for Upcomingdiscs since 2012; however, movies have played a big part of his life for much longer. Favorite genres include horror, science fiction/fantasy, and comedy. Favorite movies are V for Vendetta, Boondocks Saints, Kiss Kiss Bang Bang, and The Godfather.
Riverdale: Season 2 The Death of Superman: Deluxe Edition (Blu-ray)