Elena Of Avalor: Realm Of The Jaquins 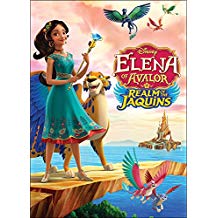 Never before have I seen a series that managed to captivate my daughter the way that Elena of Avalor: Realm of the Jaquins did. I mean, it was amazing. To give you some context, my daughter is six years old and has enough energy to exhaust a brand new puppy. Her attention span is usually no more than five minutes, but when I put this show on; she never looked away from the television. In fact, I’m not even sure that she blinked. I will admit that I enjoyed the series myself, especially the two-part titular episode that focused on the fictional Jaquin creatures that serve as the guardians of Avalor. Charming, and full of catchy original music, Elena of Avalor: Realm of the Jaquins is an excellent bonding experience for both child and parent.

Fair warning to parents: you are dropped right into the action, so I would recommend some research before attempting to watch; that way you can better follow the story. For me, my research was asking my daughter, who apparently knew everything about the show. To summarize, Elena Castillo Flores is the Crown Princess of Avalor, a magical kingdom that she must protect from an evil sorceress. Despite only being a teenager, Elena must shoulder the same responsibilities as any ruler, such as meeting with her Grand Council and making decisions that affect all the people under her charge. In this four-episode feature disc, Elena breaks tradition and travels to the world of the Jaquins in order to convince their leader to give Jacquin Nico, another chance to take the guardian test. As humans are not allowed in the world of the Jaquin, her enemies take advantage of her desires to help a friend and a free a dangerous forest sprite named Marimonda who was imprisoned centuries earlier. With the sprite determined to destroy Avalor, Elena must call upon her magical scepter, a weapon she is still learning to use, to save her people and defeat the sprite. The following two episodes set up a showdown between Elena and her archenemy, Shuriki.

Though I did struggle to follow the series early on, this was fortunately a temporary situation, as I soon began to understand how everyone fit into the overall story. Elena is a captivating lead and a source of positivity that makes her the perfect role model for adolescent. The disc does a good job of showcasing her struggling with the consequences of her decision, as she is very confident in the beginning, but quickly realizes how a rash decision can have lasting effects. To her credit, she is also very quick to own her mistakes and work to rectify them. Back to the songs: kudos to the writers, as they are very catchy and set the stage for the circumstances of the episode.

So obviously the show has the Nalyce stamp of approval, and she mentioned something about an Elena-themed birthday, with which I am completely on board. As I mentioned, Elena is a very good role model for young girls, and this disc encompasses thoughtfulness, resilience, and compassion, traits you would expect to find in a fair and just leader. In conclusion, this disc has my stamp of approval as well.

Jeremy Butler is a film school graduate of the International Academy of Design and Technology. He is been writing for Upcomingdiscs since 2012; however, movies have played a big part of his life for much longer. Favorite genres include horror, science fiction/fantasy, and comedy. Favorite movies are V for Vendetta, Boondocks Saints, Kiss Kiss Bang Bang, and The Godfather.
Strike Back Season 5 (Blu-ray) Flora (Blu-ray)