Posted in: Disc Reviews by Gino Sassani on August 17th, 2018 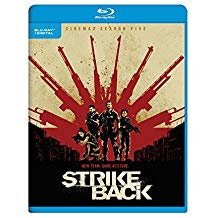 “Some of you may know he history of The Section. Rumors of operatives going rogue, the Whitehall assassination. None of that matters now. What matters is that Section 20 stood for something. They were the soldiers who kept going when others fell, who saw the odds and didn’t blink, who got the job done, even when it meant paying the ultimate price.”

Two years ago I wrote a review for the fourth and final season of the Cinemax series Strike Back. Now here I am telling you about the fifth season. So what’s up with that?

Strike Back did actually end with its fourth season. It was expected to be over, but I guess this is one of those shows that refuses to die. So here we are with more, but this is not the same show that you remember. There is a completely new cast of actors and characters. When we saw Stonebridge (Winchester) and Scott (Stapleton) ride off into the sunset going their separate ways, that really was the end of that particular series of stories to tell. By the time the idea was floated to bring the show back, Sullivan Stapleton was already attached to the series Blindspot and Philip Winchester was joining the cast of Law & Order: SVU. Neither of those guys were going to be available, so the decision was made to bring in a new team.

Meet the new team. Warren Brown is Sergeant Thomas “Mac” McAllister. His team has been assigned to extract a terrorist from a team of locals who have captured him and are handing him over to the British. But there was a leak of information, and the bad guys knew they were coming. Mac’s entire team is killed in the firefight and the terrorist escapes. He ends up punching a superior officer for putting his team at risk. That means a Court Martial unless he agrees to join Section 20. His first mission is to rescue an American being tortured because his captors think he’s an arms dealer, which was his undercover assignment for the American military. That’s Sergeant Samuel Wyatt, played by Daniel McPherson. These two guys will be the American and British officers to replace Stapleton and Winchester. They end up enjoying the same kind of love/hate relationship complete with banter and rivalry.

The team is commanded on the ground by Captain Natalie Reynolds, played by Roxanne McKee. She was Doreah in Game Of Thrones. She doesn’t look like your typical grunt soldier. Not to sound sexist, but she looks more like a model than a soldier, and they take full advantage of those looks in the first couple of episodes. She’s joined by LCpl Gracie Novin, played by Alin Sumarwata, who looks much more like a fighting woman. She’s also their tactical expert. The person in charge of it all is Col. Adeena Donovan, played by Nina Sosanya. She’s joined in the command center by the team’s computer whiz LCpl Jensen played by Phil Dunster.

The season is pretty much 10 episodes which serve as chapters in one long story. The team is on the hunt for the terrorist Mac was trying to bring back. He’s a big player in the terror game named Omair Idrisi, played by Don Hany. He’s a bit of a slippery guy, and throughout the season he’s dead then alive and captured back and forth between the team and others several times. It means that he doesn’t really get to live up to his full potential, and it’s there just waiting for the right moments. Unfortunately, the story uses him as a flag to be captured by one team and then another.

Idrisi is married to a British woman who appears to have been recruited to the cause. Her name is Jane Lowry, played by Katherine Kelly, and she ends up being the big bad throughout most of the show, but she’s not nearly as strong a character, and I thought she was a weak link in the series. Throughout the season she’s either working to get her husband back or dealing with bio-agents or raising money that appears to be more for her gain than that of the cause. All of this would have made an interesting couple of episodes, but it’s all dragged out for 10 hours and tends to be a bit thin.

What isn’t thin is the show’s action and firepower. The production is a cooperation with Cinemax and British Sky One Productions, so there’s a pretty good budget, and you get a lot of bang for that buck on the screen. Every episode features the team outnumbered and outgunned as they fight their way through impossible odds after impossible odds. The locations change, but there’s a lot of ammo fired, and a lot of stuff gets blown up along the way. You get some very high production value here with the notable exception of some of the CG work. Often CG is used to amp up the fire f/x, and it’s always obvious. The truth is that they would have been cool without the bump. There’s also a couple of incidents where CG dust is kicked up by a copter landing or takeoff. It really stands out badly against what is mostly a really tight production.

The last two episodes feature guest appearances by Winchester and Stapleton. They don’t get a ton of screen time, but I suspect this was a kind of passing the torch kind of moment that would have been much more appropriate in the early moments of the season instead of the last. I suspect the availability of the actors was a big factor in the timing. I like the new team. I am partial to the original people, but I think this team can grow on me with a season that allows them to develop with a better story. Everything is solid about this season except for the way the story plays out.

Strike Back – Declassified: These are short behind-the-scenes features for each episode (about 2-3 minutes each).

The New Team: (3:16) You get quick profiles on the new actors/characters.

I’m certainly glad to see that the show has returned. I suspect the numbers were pretty good for them to risk such a complete reboot to keep it going. I look at this season as more a transition and a proof-of-concept kind of thing. It’s a little too neat and tidy for me, but I suspect that the stuff will hit the fan for the next season. “It’s always hearts and flowers until they try and blow your brains out.”

Gino Sassani is a member of the Southeastern Film Critic's Association (SEFCA). He is a film and television critic based in Tampa, Florida. He's also the Senior Editor here at Upcomingdiscs. Gino started reviewing films in the early 1990's as a segment of his local television show Focus. He's an award-winning recording artist for Omega Records. Gino is currently working on his 8th album Merchants & Mercenaries. Gino took over Upcomingdiscs Dec 1, 2008. He works out of a home theater he calls The Reel World. Favorite films: The Godfather, The Godfather Part II, The Body Snatcher (Val Lewton film with Karloff and Lugosi, not the pod people film), Unforgiven, Gladiator, The Lion King, Jaws, Son Of Frankenstein, The Good, The Bad And The Ugly, and Monsters, Inc.
NCIS: New Orleans: The Fourth Season Elena Of Avalor: Realm Of The Jaquins