Posted in: Disc Reviews by Brent Lorentson on August 17th, 2018 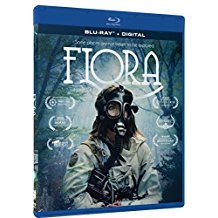 When it comes to films about man vs. nature, we typically see films where they are defending themselves in the wild where weather and predators are the biggest dangers they have to face. (The Grey and The Revenant are the titles that first come to mind.)  In the new release Flora, writer/director Sasha Louis Vukovic is here to show us that there is more to fear than wolves and bears, but how deadly pollen can be.  Somewhere I can imagine M. Night Shyamalan is happy to see that someone else has tackled this subject since his disastrous film The Happening made a whimper at the box office years ago.  Fortunately for Vukovic, he didn’t make the same mistakes and instead has crafted a film that is perhaps one of the more realistic horror scenarios that has come out in some time.

The film takes us back to 1929 when a team of students head out into an uncharted forest to meet up with their professor on an expedition to study the local flora. Unfortunately, when they arrive their professor is nowhere to be found.  To make matters more dire, the supplies they were expecting to be at camp for them to survive have been destroyed, and the only way out of the forest is by foot and more than a few weeks’ hike to civilization. While this is a nice setup with many horror elements in place, the film never quite commits to being a horror film.

Teresa Marie Doran plays Ora Blackwood. She is the clear leader of the group despite the time period. When it is discovered that their camp and the forest surrounding them is filled with a lethal pollen and they have to escape, Ora manages to be the sensible leader as their team discusses how they will escape and survive.  The scenes at the camp are really some of the weaker bits of the film, and they do play a bit long. Personally, though, my favorite sequence in the front portion of the film involves a scene where the team is testing out potential plants they can eat. Let’s just say it doesn’t work out as well as hoped.

One of the struggles the film has is with the cast. Sure, I understand it’s a low-budget project, but some of the acting is simply uneven and is just bad at points. If some scenes had been tightened or simply removed, I feel the first half of the film would have moved a lot smoother, but it still managed to hold my interest.

When the film moves into the second half as the team attempts their escape, this is where the film ramps up its energy and actually becomes an engaging ride.  I dig the makeshift survival suits they have to wear, and I like that we get a variety of clever ways we can witness the pollen wreaking havoc on these characters. But what really holds this film together is the cinematography from Eric Irvin.  The imagery captured in and around the forest is beautiful to look at while also adding to the peril of the situation at hand.  There’s a moment when students are perched up on a cliff and looking out at the vast amount of forest they have to pass through to reach safety; the sight is equally beautiful and haunting.  It’s a reminder of how things used to be, before man came along to carve out their existence and build structures in place of the wild.

While the film isn’t filled with twists and does go a rather predictable path, Flora still manages to be entertaining to the very end.  This is one of those films that lets us know that writer/director Sasha Louis Vukovic is a talent to keep an eye on in the future, and with a bigger budget I’m curious what he can deliver.

Flora is presented in the aspect ratio 2.00:1.  The 1080p image is arrived at with an AVC MPEG-4 codec at an average of 26 mbps.  Considering this was shot on a meager budget, the end product is impressive.  What helps the film is the lush scenery that they filmed around, where the local vegetation seems to pop on the screen in a variety of greens.  While the day time shots manage to capture plenty of detail, it’s the night shots that reflect the budget.  Though we can see the characters and the warmth of the lighting does well for the scenes in the tents, there isn’t a lot of depth when it comes to actual night shots or any separation in the blacks.  Thankfully the film is shot mostly in the daytime.  There were no compression issues or any artifacts to get in the way of the presentation.

The DTS-HD Master Audio 5.1 track is a bit of a reminder that this is not a Hollywood blockbuster we are viewing.  The dialog is a bit unbalanced in the start of the film but remains audible throughout the films duration.  The silence in the forest is what allows for its haunting atmosphere at times as the film reaches the climax.  There isn’t much in the way of background noise, but for the scenes when they are near a river, the flow of water does allow for a more immersive experience.

Commentary with Writer/Director Sasha Louis Vukovic amd cast members Teresa Marie Dorain and Dan Lin. This is a track you want to check out if you are an aspiring filmmaker.  The track discusses the process of making the film and experiences with the production that can be beneficial to some.

Behind the Scenes: (6:50) Here we get a brief look at the how the film was made and see the cinematographer, Eric Irvin shooting with a small DSLR, which is a reminder to how much film has changed  over the years.  We get some brief interviews with the cast and crew on set.

Deleted Scenes: (6:08) We only have two deleted scenes; one is an alternate opening, and the other is more of an outtake as we see how difficult it is for a car from the 1920’s maneuvering in the woods.

While the film isn’t perfect, it’s definitely a refreshing experience.  While I don’t foresee Flora becoming some cult sensation, it is definitely an entertaining survivalist film that is worth checking out if you are in the mood for something different.  But for those who have an itch for making a movie some day, this is a good one to take some notes from and shows you don’t need big budgets or effects to pull off a movie.

Brent Lorentson is a horror writer and film critic based out of Tampa, Florida. With a BA in Digital Film, he co-wrote and co-directed Scavenger Hunt. His short stories have appeared in various horror anthologies. In 2019 his short script Fertile Blood will be a part of the anthology horror film Slumber Party. He is currently working on his first novel A Dark and Secret Place set to be released in late 2019. Favorite Films: Taxi Driver, Fight Club, I Saw the Devil, The Wild Bunch, Dawn of the Dead, A Clockwork Orange, Pulp Fiction, Heathers, The Monster Squad, and High Fidelity.
Elena Of Avalor: Realm Of The Jaquins Muppet Babies: Time To Play!