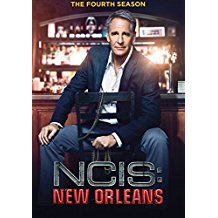 “We don’t have time for square one.”

If you are at all familiar with the NCIS franchise, you know that the show tends to follow a bit of a formula. Each spinoff has some unique style aspects, but the episodes tend to be relatively self-contained. That means you can start with Season 4 of NCIS: New Orleans and still be able to appreciate most of what’s going on. You’ll get to know and understand the characters pretty quickly. The franchise has leaned more toward continuous story arcs of late, and NCIS: New Orleans does that more than the others. So while you could certainly enjoy this release on its own, I still recommend you go back and catch up on the first three seasons just to get caught up and maximize your enjoyment. The good news is that we can help you with that. You don’t have to wade through 10 years of Jag, 15 years of NCIS and 8 years of NCIS: L.A., although that might be one heck of a fun binge. Just catch up on the first three seasons of this show and you’ll be ready to go. You can check out those reviews here.

The fourth season begins with the consequences of the previous year’s big story. Dwayne Pride (Bakula) took some pretty big risks to bring down a conspiracy that included the city’s mayor to destroy a low-income area of the city by flooding it and killing thousands. They wanted to use the land for a port project that would have brought millions of dollars to the city, but mostly their pockets. Now Pride is paying the price. A local news blogger has gotten some of his case files and has published incidents of Pride going rogue and “bending” the rules. Even beating and kidnapping suspects. Once again a season starts with the unit under investigation and in danger of getting shuttered. Yes, that’s exactly how Season 3 started. This time it isn’t going to be resolved in just a handful of episodes. This story is going to dominate the season.

The team remains pretty much the same, at least as the season starts. Scott Bakula is back as the team leader Dwayne Pride. He spends a lot of the season trying to color within the lines, but anyone who has watched this knows that’s not going to work out so well. This season he also starts to see his command getting weaker with his team. They are starting to question his orders and his motives. That is particularly true for Sonja Percy, played by Shalita Grant. It was no secret when the season began that she would be leaving the show this year, and you see those seeds planted pretty early on. Lucas Black returns as Christopher LaSalle, who is Pride’s right-hand man and the senior agent in the team. He’ll end up with problems of his own this season. His father dies and manipulates him into having to take responsibility for his family’s 100-million-dollar business. Rob Kerkovich is Sebastian. He used to be an office tech guy, but since last season he is now a field agent. For years he’s been wanting to get out of the lab, and this season offers him a little of that be-careful-what-you-wish-for. He is forced to take his first life, and as if that wasn’t emotionally troublesome enough, the shoot is being called into question, and he may end up in jail. CCH Pounder continues her strong presence as the county medical examiner with an attitude. Her adopted son is starting to take after Pride a little too much, and she blames Pride when he attempts to do the right thing and his life is in danger. Daryl “Chill” Mitchell continues as the comedy relief, playing wheelchair-bound Triple P Patton Plame. This season we learn how he ended up in the chair when a case brings him back into contact with one of his ex-wives. It’s a chance to see the serious nature of the actor and character. Finally, Vanessa Ferlito returns for her first full year as ex-FBI agent, now NCIS agent Tammy Gregorio. She’s just learning to be a team player and takes it the hardest when Percy leaves.

This season offers up a chance to visit with some of the show’s more endearing recurring characters. When last year’s conspirators start dying, we find out there was a bigger fish than Mayor Hamilton, and each ends up dead when they attempt to make a deal. That means we get to see Steven Weber return for a couple of episodes as Hamilton, and the chemistry he has with Bakula is always good stuff. Last season it was FBI Agent Isler that was charged with investigating the team. Now he returns from time to time as a more friendly FBI connection, and that means several episodes with Derek Webster along for the ride. Matt Servino was the FBI agent investigating Tony Soprano back in the day. Now he’s a captain of the New Orleans police force as Captain Estes. He gets to become a crucial piece of the puzzle this season. Chelsea Field is the real-life wife of Scott Bakula, and she returns as his love interest Rita Devereaux. Rita is back from Washington to let Pride know that someone big in D.C. is after him and behind many of the really bad things that are happening to Pride and his team. That all leads up to a wild two-part episode season finale.

There are some new faces to be found this season. Amanda Warren plays the city’s acting Mayor Taylor. Loretta will end up splitting her time with the team to help her campaign for the job full-time. She brings a character that has some tension with the team but potential to be more cooperative. Desperate Housewives star Doug Savant is a deputy Attorney General who figures into the big story as a nemesis for Pride and the team. Mark Gessner is Oliver Crane, the blogger who ends up bringing the pressure on Pride, turning his city against him.

There are some standalone cases that help to balance the season. There’s a Halloween episode that features a 150-year-old ghost and a trip to a midnight graveyard. Some headlines-ripping episodes include one about a printed gun, and the city turning against Pride certainly touches heavily on the police/community relations that have caused too much news of late. Jimmy Buffett appears in the premier episode to help Pride reopen his bar that was torched last season. There is no crossover this season with any of the other shows. Star Trek fans should check out a pretty quick Easter egg. When Pride is talking to the chief on the conference video screen, the message is identified as NX-01 when it concludes. That was, of course, the registration number for Bakula’s Enterprise. You get 22 episodes on six discs with a few extras. There’s the traditional CBS half-hour season wrap-up. You get a profile on Patton/Mitchell. There’s a short feature that asks the actors what’s the most common question fans ask you. It’s all tied up with a sit-down between Bakula and Fields.

The finale is a pretty fast-moving affair that gives you some wonderful build-up. Unfortunately, I have to say I was disappointed with the climax and resolution. It looked too much like those run-out-of-time endings that wasn’t quite up to the buildup. The final minute of the finale launches us into a whole new aspect of this story with a sudden cliffhanger. Next year will end up being three years that this show has pretty much milked the same story thread. I’m looking forward to going somewhere else with this by the time Season 5 ends. But I’ll be here to watch it wherever it goes. “Sometimes it sucks being so good at what you do.”

Gino Sassani is a member of the Southeastern Film Critic's Association (SEFCA). He is a film and television critic based in Tampa, Florida. He's also the Senior Editor here at Upcomingdiscs. Gino started reviewing films in the early 1990's as a segment of his local television show Focus. He's an award-winning recording artist for Omega Records. Gino is currently working on his 8th album Merchants & Mercenaries. Gino took over Upcomingdiscs Dec 1, 2008. He works out of a home theater he calls The Reel World. Favorite films: The Godfather, The Godfather Part II, The Body Snatcher (Val Lewton film with Karloff and Lugosi, not the pod people film), Unforgiven, Gladiator, The Lion King, Jaws, Son Of Frankenstein, The Good, The Bad And The Ugly, and Monsters, Inc.
American Hunter Strike Back Season 5 (Blu-ray)