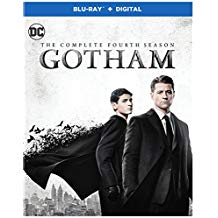 The Fall TV season is upon us! While the number of channels and streaming services producing original content has erupted in recent years, the five major broadcast networks still roll out a glut of new and returning small screen offerings each September. This week’s Round Up features a handful of shows that has us playing catch up before next month. Warner Bros. makes its mark with Blindspot: Season 3, while a young dark knight continues to rise in Gotham: Season 4. Over on CBS, family comes first in Blue Bloods: Season 8, while justice is served in NCIS: Season 15. Meanwhile, Mill Creek isn’t afraid to experiment with Masters of Sex: The Complete Series. We’ve also got a couple of big screen offerings arriving on Blu-ray from Lionsgate as Jackie Chan springs into action in Bleeding Steel, while Ethan Hawke questions his faith in First Reformed. Fox comes alive with Deadpool 2 The Super Duper $@%!#& Cut out on UHD/4K.

Don’t forget: if you’re shopping for anything on Amazon and you do it through one of our links, it’ll help keep the lights on here at UpcomingDiscs. See ya next week!