Posted in: The Reel World by Jeremy Butler on September 14th, 2018 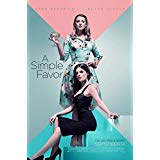 The favor, a paramount commitment of friendship. Everyday friends engage in this covenant, without batting an eye. But what if that favor had lasting consequences? That is how this story begins, and it rapidly descends into a tale of love, loyalty, murder, and revenge. Anna Kendrick and Blake Lively join together for a quirky and campy mystery entitled A Simple Favor that I actually must admit that I enjoyed more than I was expecting to. I mean, obviously, Blake Lively is a captivating beauty, and Anna Kendrick is the embodiment of the girl next door. Not to mention no one does that quirky charming persona like Kendrick. However, if I had to pick who was the more entertaining of the two, I would have to give a slight edge to Lively, for reasons that I will soon elaborate on. A Simple Favor is based off a book of the same name. I’m not sure how closely the film followed the book, but I imagine that the audience will not be disappointed with the film.

Kendrick plays Stephanie Smothers, a mommy blogger and single mom whose life became all about her son following the death of her husband and brother in a car accident. When her son befriends another kid in his class, she meets the beautiful and enigmatic Emily Nelson, a working mom who is very outspoken. The two bond during a play date with their kids, and Stephanie begins to really admire Emily and her life with her husband. One day, Emily calls Stephanie and asks a simple favor: pick up her son after school. Stephanie is happy to oblige, but hours quickly turn into days and no word from Emily.

Growing concerned, Stephanie contacts Emily’s husband, and the police are notified. Determined to discover what happened to her best friend, Stephanie begins to unofficially investigate, swiftly learning that the person she befriended isn’t who she thought she was. Suddenly, Stephanie finds herself in engrossed in a game of cat and mouse with an opponent who is well versed in the art of manipulation.

So allow me to explain why I give Blake Lively the edge when it comes to her and Anna Kendrick’s performances. When you look at Lively, you have no trouble seeing her as the seductress who would be able to make anyone (male or female) act against their better interest. She wields that power masterfully throughout the film, but it is the brashness and outspokenness of her character that really took me by surprise. Her character truly has no filter, evident when she is arguing with her son and she accounts the graphic nature of his birth as a way of proving her point. That opening scene sets the tone of her character, making her the more entertaining of the two by a slight margin. Her character appears to be reprehensible in the way she ruins lives, but she does have one redeeming quality, her love for her son, which serves to humanize an otherwise villainous character. As I mentioned earlier, Anna Kendrick is not to be discounted with her social awkwardness. Also there are a few revelations regarding her character that will have you looking at her in a new light. She is clearly not the wholesome sweetheart that she appears to be. There are some skeletons neatly stored away in her closet.

The two characters together make for some entertaining power shifts and twists.  I have to say that the constant power shift did become a bit tedious towards the end. Additionally, there was a realism to the story that made it believable for a majority of the film; the ending is a bit over the top and an obvious attempt at a comedic resolution.

In conclusion, given its competition this week (i.e. The Predator and current reigning champ The Nun), it is unlikely that A Simple Favor is going to win the box office this week, but I do say it stands a decent chance of turning a good profit. My wife has already requested to see it, and I’m not as bothered to see it again as I would normally be. There are several elements that the film does well, and that is what is likely to draw the crowd. There is a mystery element, the dialog is above average, the cast is winning, and it’s unexpectedly funny. The funny aspect is what is going to catch everyone by surprise.

Jeremy Butler is a film school graduate of the International Academy of Design and Technology. He is been writing for Upcomingdiscs since 2012; however, movies have played a big part of his life for much longer. Favorite genres include horror, science fiction/fantasy, and comedy. Favorite movies are V for Vendetta, Boondocks Saints, Kiss Kiss Bang Bang, and The Godfather.
The Big Bang Theory: The Complete 11th Season (Blu-ray) White Boy Rick