Posted in: The Reel World by Gino Sassani on September 15th, 2018 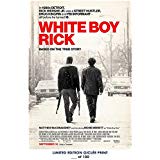 There is something about the words “based on a true story” that seems to have a certain effect on us and seems to alter our perception of a film.  Then there is something about a true crime story that seems to excite us even more; at least for me, I enjoy these films where we get a glimpse of the seedy underbelly of society. So when White Boy Rick comes along to tell the tale of the youngest FBI informant who also happened to be an arms dealer and drug kingpin, well, this is the kind of film I tend to get excited about.  When I first saw the trailer, it had me thinking this could be a hodgepodge of American Hustle, Blow, and Goodfellas all wrapped into one. Unfortunately, though the film has some great talent and oodles of potential, the result is a good-looking mess on the screen.

The film opens up in 1984 where we meet Rick Wershe Jr. (Richie Merrit) and his dad Richard Wershe Sr. (Matthew McConaughey) at a gun show.  We get to see the duo hustle one of the dealers as they are purchasing a pair of AK-47’s.  What we can pick up on from the start of the picture is that there is a believable chemistry between McConaughey and Merrit that we can believe these guys are father and son.  There is also Rick’s sister Dawn (Bel Powley), who has become a drug addict, and we see her early in the film leave home to be with her unsavory boyfriend. Rounding out the Wershe clan are the grandparents, played by Bruce Dern and Piper Laurie.  Had the film simply focused just on the family, I believe there could have been a stronger film here, but the relationship between Rick and Dawn is definitely the weak link and becomes a distraction to the story, because she seems to just pop in and out of the film without bringing anything to further the story.

When we first meet the Wershes they are basically small-time arms dealers, though some of the dad’s clients happen to be some of the major criminals operating on the streets of Detroit.  This happens to get the attention of the FBI, and Agent Alex Snyder (Jennifer Jason Leigh) approaches the family to try to get them to cooperate.  What’s amusing is how we see law enforcement help Rick get the funds, and they allow him to start dealing and manufacturing drugs and even let him keep a piece of it.  Quickly we see Rick setting up his little empire and making more money than his family has ever seen.  The problem is, everything happens so fast it’s hard to believe or understand what is going on or how Rick’s crew would operate; we’re are just simply told this is what is happening.  Just as quickly as we see Rick making a name for himself, we see him get shot and become a dad.  As the film heads into its third act and we see Rick become the youngest criminal to be sent to prison with a life sentence for a nonviolent crime, it’s as though as an audience member you’ve blacked out and managed to miss a good hour’s worth of storytelling.

One of the film’s strongest moments is when the film attempts to give itself time to breathe, when we see the film move to Vegas, where Rick is still learning who is who in the criminal circuit he is running in.  We get to see Rick having fun and living it up spending money and meeting girls.  This trip is what sets up a lot that is to come in the film, but most importantly we get the chance to see why Rick wants to be a part of this life and how it is such an exotic escape from his real life.  This is also where the cinematography gets a reprieve from shooting in the drab and rundown locations meant to double for the slums of Detroit, though if I read the credits correctly, it was actually filmed in Ohio.  The color injected in these Vegas scenes are the kind of energy we needed in this film, though there are some fun bits we see earlier in the film when Rick first goes to the skating rink. At the rink we given some flash between old school hip-hop (by the way, the soundtrack for the film is pretty great if you like your old school jams) and seeing a variety of fashion styles and dance moves.  But where the film could have shone and been filled with dramatic impact, it just doesn’t deliver.  For instance, we know Wershe Sr. has a dream of one day running his own video store; when he suddenly gets this big payoff, there is no emotional connection to it. Perhaps that is the issue with this film. There is a lack of emotion to it; instead it is simply moments cut together to tell a situation, but not a story, or at least not one with much heart to it.

Some movies are three hours and you feel like you’ve been watching paint dry on the wall for a story that could have been told in 90 minutes.  White Boy Rick comes in at 1 hour and 50 minutes and could easily have been an hour longer, and I don’t feel anyone would have complained, because the story is engaging, but it is also complicated with a lot of pieces that we never get to spend enough time understanding.  The performances from what we see are really impressive. Though McConaughey is great here, I feel we almost had too much of him considering the film is supposed to be about his son.  And this brings me to Richie Merrit; this is his first film or TV credit, and he does a hell of a good job at pulling off this role.

At the end of the day, I enjoyed the film for what it was, but I want to believe that somewhere there is a longer cut of this film, and it does the story justice.  This could have been a classic, but instead I see this film being forgotten in a couple months despite some really great performances on display here.

Gino Sassani is a member of the Southeastern Film Critic's Association (SEFCA). He is a film and television critic based in Tampa, Florida. He's also the Senior Editor here at Upcomingdiscs. Gino started reviewing films in the early 1990's as a segment of his local television show Focus. He's an award-winning recording artist for Omega Records. Gino is currently working on his 8th album Merchants & Mercenaries. Gino took over Upcomingdiscs Dec 1, 2008. He works out of a home theater he calls The Reel World. Favorite films: The Godfather, The Godfather Part II, The Body Snatcher (Val Lewton film with Karloff and Lugosi, not the pod people film), Unforgiven, Gladiator, The Lion King, Jaws, Son Of Frankenstein, The Good, The Bad And The Ugly, and Monsters, Inc.
A Simple Favor The Predator (2018)