Posted in: Disc Reviews by Gino Sassani on September 14th, 2018 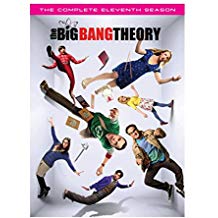 “You’re in a stolen cop car with a dead hooker in the trunk; you don’t have to obey traffic laws.”

The Big Bang Theory certainly didn’t obey the established laws for television comedy. The series was certainly more cerebral than most, and a lot of jokes went over a lot of heads, I suspect. But it was never about the geek factor or the IQ of the characters. The show was simply about the characters, and that extended family has spent 11 years in our living rooms or home theatres. But like all good things, The Big Bang Theory is about to come to an end. Jim Parsons was never the show’s top billing, but there’s little doubt that Sheldon became the most engaging character. When Parsons was offered $50 million for two more seasons, he turned the offer down. Instead of trying to do the show without him, the decision was made to bring the long-running comedy to a close. The upcoming 12th year will be its final season. Fans don’t have much to be sad about. 10 years appears to be the ceiling for even the best comedy shows to grace our television screens. Monster hits like Seinfeld and Friends didn’t break 10 seasons. Classics like M*A*S*H or All In The Family never saw 11 and 9 seasons respectively. 12 years will be a very respectable run. The fans will also get to hang out with Sheldon for the foreseeable future, albeit as a little kid in Young Sheldon. Finally, fans will have these Blu-ray collections to revisit these characters for many years to come. Old shows don’t die; they just live on through discs or streaming services.

The 11th season picks up exactly where the previous season left off, I mean right down to the second. Sheldon (Parsons) flew to Princeton to propose to Amy (Bialik). And that sets the mood and theme for the entire year. The season builds up to the actual wedding, which appropriately finishes the season. Along the way the preparations make for much of the year’s fodder. Sheldon and Amy aren’t the only characters in for big changes. Howard (Helberg) and Bernadette are having a second baby, thanks to the real-life pregnancy of actress Melissa Rauch. Raj (Nayyar) finally gets work as the presenter at the local planetarium. He also finds out the job attracts women. Actor Nayyar finally gets to wear his hair in its naturally curled state. Raj also has a run-in with The Shield’s bad boy Walter Goggins as a jealous husband of one of those women he’s been getting from the job. For Penny (Cuoco) and Leonard (Galecki), things are pretty much status quo.

There are a few notable events this season. Bon Newhart returns as the Obi-Wan ghost of his deceased character Professor Proton. He reprises the role on Young Sheldon as well. This time Sheldon is dreaming him because the network has decided to bring the show back with a new Professor Proton. Sheldon auditions for the part, but it falls to his rival, Wil Wheaton, who also ends up competing with Mark Hamill to officiate the finale wedding event.  Comics superstar Neil Gaiman appears as himself at the comic book store. When he mentions his visit in an article, the store is suddenly jumping. But the guys aren’t happy with its new-found popularity, and Gaiman isn’t happy because no one actually recognizes him, and they ignore his comic knowledge.

A sad moment for the show is the final appearance by Stephen Hawking, who appeared in the season premiere and passed away shortly after that show aired. There’s a deleted scene in the season finale where Sheldon learns that Hawking sent him a wedding present before he died.

We get to meet Amy’s parents, played by Kathy Bates and Teller. We also get to meet the rest of Sheldon’s family. His Mom’s been here before, played by Laurie Metcalf. Now we see his older brother George, played by Jerry O’Connell, and sister Missy, played by Courtney Henggeler. When you throw in Wheaton and Mark Hamill, the finale is the most star-studded episode of the show.

The Maturation Imperative: (11:05) This feature looks at the life-altering changes in the characters’ lives, particularly the wedding.

The Blueprint Of Comedy: (5:43) The cast and crew look at a few scenes with some behind-the-scenes footage.

The new season is about to start, and it will be interesting to see how they decide to end the series. Series finales can be quite tricky. Some have been classic, like the final episode of Newhart that revealed the entire series was a dream by Newhart’s character in the earlier Bob Newhart series. Finales can be dramatic and impactful, as was the final episode of M*A*S*H. Endings can be bittersweet, like the strong finale of Six Feet Under. Endings can also be disappointing, like the finale for Enterprise, or lead to frustration and anger, like the infamous Sopranos finale. Don’t ask me how The Big Bang Theory will end. “I can’t tell you; it’s top secret.”

Gino Sassani is a member of the Southeastern Film Critic's Association (SEFCA). He is a film and television critic based in Tampa, Florida. He's also the Senior Editor here at Upcomingdiscs. Gino started reviewing films in the early 1990's as a segment of his local television show Focus. He's an award-winning recording artist for Omega Records. Gino is currently working on his 8th album Merchants & Mercenaries. Gino took over Upcomingdiscs Dec 1, 2008. He works out of a home theater he calls The Reel World. Favorite films: The Godfather, The Godfather Part II, The Body Snatcher (Val Lewton film with Karloff and Lugosi, not the pod people film), Unforgiven, Gladiator, The Lion King, Jaws, Son Of Frankenstein, The Good, The Bad And The Ugly, and Monsters, Inc.
Joni Mitchell: Both Sides Now — Live at The Isle of Wight Festival 1970 (Blu-ray) A Simple Favor