Posted in: No Huddle by Gino Sassani on September 21st, 2018 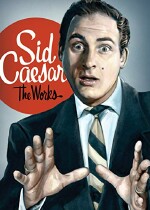 “In the exciting days of live television, there was one show that won major awards in all categories. It was a live show in a live theater, and what you will hear is live laughter – a genuine reaction of a live audience.”

That was Sid Caesar’s Your Show of Shows. Sid Caesar is arguably the world’s first major television star. His show was a monster hit that eventually earned him $25,000 an episode back in the early 1950’s. He was something of a comic chameleon. He portrayed many iconic characters where Sid himself appeared to completely disappear into the role. His skits were often like small films that ran 20 minutes or more. Many of them spoofed films of the day and were rather large productions for a comic skit. Most skits on television are running out of steam after two to three minutes, but Sid Caesar had the uncanny ability to grab your attention and hold it for a considerable time.

Sid didn’t do this on his own. His partners in comedy were usually Carl Reiner, Howard Morris, and Imogene Coca. The list of writers who got their start on his shows is a staggering Who’s Who in television comedy for decades. Carl Reiner would go on to create The Dick Van Dyke Show. Larry Gelbart went on to create M*A*S*H. Mel Tolkin went on to create Sanford and Son. Gary Belkin went on to team up with Johnny Carson for The Tonight Show. Aaron Ruben went on to create The Andy Griffith Show and Gomer Pyle: USMC. Phil Sharpe was part of the team that gave us Hogan’s Heroes. Many of those that started on Sid Caesar’s show went on to become iconic names in Hollywood. Would you believe both Woody Allen and Neil Simon started there? Caesar was also fond of a young writer who he could not get his producers to bring on the staff. He ended up paying him out of his own pocket and eventually from the show’s petty cash. That guy was named Mel Brooks. You might have heard of him. In sports you often hear of coaching trees where a legendary coach mentored other coaches who would become legendary themselves. No one in television can claim the kind of future talent that worked here. That list of shows and the shows they influenced is the backbone of the television comedy industry.

Shout Factory has released a five-disc collection called Sid Caesar: The Works. Of course, his resume is much too large to fit on just five DVD’s but this is a solid sampler collection that will introduce you to the genius that was indeed Sid Caesar. You get the 1973 film Ten From Your Show Of Shows, which was a major motion picture release of 10 skits from the show. You get a Friar’s Club roast of Caesar that included Reiner and Brooks. There are early television talk show appearances. There are over 25 sketches that run from 15-25 minutes each. Caesar believed that anyone can do a one-liner. He thought it took much more skill to do a longer-form comedy. The set includes a Master Class episode with Caesar. There’s a Paley Center Tribute with Mel Brooks and Carl Reiner that was held when Caesar passed in 2014.  I’m particularly fond of these panels from more recent years that usually included Mel Brooks. It’s amazing how much energy the 93-year old master has when he talks about Sid Caesar. He was Sid’s inside man for years and tried for decades to get him to move to motion pictures so that his work would be better preserved. Sid was making too much money to take the risk, but Brooks did eventually cast him in cameos for many of his own films. It’s these more recent panels that are the greatest testament to Caesar’s work. The cast and crew must have been drinking a little water provided by Ponce DeLeon, because most of these guys lived into their 90’s. Both Mel Brooks and Carl Reiner are well into their 90’s and still with us. Caesar finally passed in 2014 at the age of 92.

Most of this material is from kinescope prints, so the quality is not very good. There’s no help for that, and it’s the best available. That’s exactly why Brooks wanted him to do more movies. That was an early process of filming a show directly from the television monitor. In those days there were no such things as reruns, and the filming was merely for archive or reference purposes. They were never intended to be replayed. Many early Honeymooners episodes were considered “lost” because they were only preserved in this way. We’re talking early 1950’s technology and a medium in television that was still quite experimental. No one could have guessed where television would go in the 70 years since that time.

The discs are all loaded to the max with material. It feels like five discs of bonus materials, and even after hours of watching, the set will certainly leave you wanting more. Of course, there is a lot more. But it’s not just Caesar who provided it. Just turn on any television comedy from All In The Family to The Simpsons, and you’ll find it was touched directly by hands that once wrote for Sid Caesar. Watching this collection “will break every bone in your eyeball”.

Gino Sassani is a member of the Southeastern Film Critic's Association (SEFCA). He is a film and television critic based in Tampa, Florida. He's also the Senior Editor here at Upcomingdiscs. Gino started reviewing films in the early 1990's as a segment of his local television show Focus. He's an award-winning recording artist for Omega Records. Gino is currently working on his 8th album Merchants & Mercenaries. Gino took over Upcomingdiscs Dec 1, 2008. He works out of a home theater he calls The Reel World. Favorite films: The Godfather, The Godfather Part II, The Body Snatcher (Val Lewton film with Karloff and Lugosi, not the pod people film), Unforgiven, Gladiator, The Lion King, Jaws, Son Of Frankenstein, The Good, The Bad And The Ugly, and Monsters, Inc.
Found Footage 3D (Blu-ray) Ocean’s 8 (UHD Blu-ray) (4K)