Posted in: Disc Reviews by Brent Lorentson on September 21st, 2018 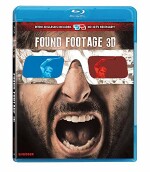 It’s okay to groan. I get it.  Just when you thought the found-footage genre was dead, another film manages to get released.  I think at this point we all simply have to accept that this is a genre that will never completely die on us, but we can always hope that it will eventually produce a hit every once and a while.  When it comes to Found Footage 3D, it’s a bit of a mixed bag for me, and since the Blu-ray came with both a 3D and 2D version, I did in all fairness watch both versions, and there is definitely a version that won out, and if the time comes that I check this out again, I know how I plan on doing so.  In case you were wondering, the disc does come with two individual 3D glasses, not the ones you can pick up at your local theater, but instead the throwback red and blue kind.

The clever twist that Found Footage 3D has going for it is that it is found-footage film about a film crew that is setting out to make a horror film in 3D.  It doesn’t take long before we realize how the film is very self aware understanding the numerous typical tropes that are in the genre and knows there are two key rules they need to follow.  Rule #1: give a reason for why the people are videotaping every moment, and Rule #2: when the third act comes along, have a good reason to explain why they are still filming and not tossing the camera aside. Derek (Carter Roy) is the over-the-top filmmaker with a vision to make the first found-footage horror film in 3D and is overly ambitious by also having the making of the film shot in 3D as well.

The early moments of the film are very familiar as it is introducing us to the crew and setting up the dynamics of it.  The film they are setting out to make is Spectre of Death with Andrew (Tom Saporito) directing, Carl (Scott Allen Perry) as the sound guy, Lily (Jessica Perrin) as the PA, Mark (Chris O’ Brien) the films documentarian, Amy (Alena Von Stroheim) as Spectre of Death’s lead actress, and Derek as its lead actor. This is definitely an ensemble cast, and one of the best things the film has going for it is how well they all work together. Where we really get to see their chemistry shine is when they find a pair of locals who they decide to use for their movie.  The scene is fairly simple and one we’ve seen in numerous horror films where the locals warn unsuspecting travelers that they place they are destined to travel to is doomed.  As it turns out, the house Derek wants to film the movie at is apparently really haunted, and it’s Scott who doesn’t hold back his thoughts that filming a haunted house film at a real haunted house is a bad idea.

The first third of the film is really the film’s strongest portion. Once the crew starts going through the motions of making the film it tends to drag just a little, but what kept me pulled in were the characters, between Derek being an over-controlling jerk, to Adam being patient while slowly losing his cool as he is losing control on the film is an amusing and honest portrayal of filmmaking in the low-budget world.  As things begin to go awry on set, Scott plays the voice of reason amusingly well, as I’d imagine a lot of the audience will be thinking and agree with him a good portion of the time.

What is frustrating with the film is that though it’s clever and self-aware, it still falls into many of the typical tropes of found-footage films we’ve seen before, and it doesn’t inject anything fresh or exciting. so we already know where this is all going.  Sure. this mentality worked in the Scream films, though to be fair. that was also a more expertly crafted film. Found Footage 3D just can’t escape its self-awareness.

Thankfully the film’s third act is strong, and there is a clever split-screen moment, though I wish we got more of this over the course of the entire film. Thankfully the movie manages to keep a good rhythm at the end, and though the film’s ending may not be shocking, it’s the chemistry of the characters that makes it all work.

As for the 3D elements in the film, I feel the gimmick hurts the film more than anything.  There are a few moments where the 3D makes a good impression, but overall it takes away from some of the good-looking visuals.  The entire third act works so much better in 2D, because you can actually see what’s going on, and you can enjoy more of the detail that gets lost in the 3D cut.

Found Footage 3D is presented in the aspect ratio 1.78:1.  The 1080p image is arrived at with an AVC MPEG-4 codec at an average of 22 mbps.  First I’m going to talk about the 2D version of the film.  There is a lot of color in this film, and the strength of the image quality is definitely what we see in the footage shot in the daytime.  Greens look really good here, and at times with sequences in the barn there is a nice warmth to the image.  When it goes to night, and with the lack of light used, there is a bit of noise that comes up. Because this is a found-footage film, I can look past this, especially because it looks better than other found-footage films I’ve seen in the past.

As for the 3D version of the film, the Blu-ray comes with a set of the blue and red 3D glasses, and while it’s a nice gimmick, that is all it really is.  The 3D suffers because the image is darker, and we do lose a bit of detail.  The night shots suffer as well, to the point it seems like I’m almost watching a film in black and white.  The shots with blood and a bit of gore definitely lose their effectiveness.  Perhaps this is simply a result of the glasses that come with the package, but there have definitely been better attempts at shooting 3D than this film.

The DTS-HD Master Audio 5.1 track is just about what you would expect for a found-footage film, so get ready to lower the bar.  The dialog is a mixed bag. Sometimes it is clear and audible, and at other times, thankfully, subtitles are supplied  This really sticks true to the found-footage dynamic, where we don’t even get a score here.  Aside from some moments in the final act, there really isn’t anything significant to the sound design here.  The film even jokes about how to be a successful found-footage film the audio needs to be bad. Well, in this case, it looks like they succeeded.

Commentary with Director Steven DeGennaro: This is a decent commentary and there is plenty of information here, but I kind of wish he had members of the crew to give the commentary a little more energy.

Commentary with Producers Scott Weinberg, Randi Ludwig and Charles Mulford: This commentary is definitely one I would consider fun and informative for those that are film students and film buffs.  These guys keep the conversation going throughout and have plenty of stories of their own from the production.

For a film about a film crew making a found footage film it’s kind of a shame they didn’t take it a step further and include a making of, but perhaps that would have been a little to meta to hope for.

Deleted Scenes: (20:37) All the scenes are cut together but the one that stands out explains how the Amy character ended up with a black eye, while the other scenes are entertaining you can easily see why the others were trimmed from the film.

Outtakes: (8:46) This is basically your typical collection of line flubbing and mistakes during shots.

Extended Scenes: (24:14) Even more footage from scenes that are included untouched and we can see just how long some of these sequences originally were.

Considering I’ve already seen the film twice and I know I’m going to end up watching it again is a good sign that this is pretty good.  With the Halloween season upon us, this is one of those late night films to throw on to get into the spirit of things.  For the horror geeks and film students out there I feel those are the ones that will respond to this the most.  This is a fun and entertaining film but I definitely recommend seeing the film without the glasses first.

Brent Lorentson is a horror writer and film critic based out of Tampa, Florida. With a BA in Digital Film, he co-wrote and co-directed Scavenger Hunt. His short stories have appeared in various horror anthologies. In 2019 his short script Fertile Blood will be a part of the anthology horror film Slumber Party. He is currently working on his first novel A Dark and Secret Place set to be released in late 2019. Favorite Films: Taxi Driver, Fight Club, I Saw the Devil, The Wild Bunch, Dawn of the Dead, A Clockwork Orange, Pulp Fiction, Heathers, The Monster Squad, and High Fidelity.
Rolling Stone: Stories From The Edge (Blu-ray) Sid Caesar: The Works