Posted in: Disc Reviews by Gino Sassani on September 21st, 2018 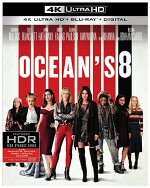 “It’s not just for profit. It’s for revenge. It’s a twofer.”

Hollywood has been making a greater effort these days to add some diversity to their film casts. From minorities to women, this has been a year of unprecedented changes in the makeup of so many films. One of the new trends in this effort is to remake/re-imagine/reboot an already established franchise with a gender-switched cast. The results have been somewhat mixed. The female Ghostbusters film was a complete disappointment. And while it might be easy to blame the female cast, the issues go much deeper than that. Now the Ocean’s franchise has decided to play in that territory, with better results. Ocean’s 8 delivers the familiar formula of the Steven Soderbergh remake trilogy of the original Rat-Pack film, but with an all-girl heist crew. The film is still a bit of a disappointment in some ways, but it’s a much better ride than Ghostbusters by a long mile, and again the flaws have little to do with the cast or the gender-swapped model.

Sandra Bullock is Debbie Ocean, the sister to George Clooney’s Danny Ocean from the Soderbergh films. She’s just been released from prison and is back out on the streets stealing almost as soon as her feet hit the pavement. But these are silly little common crimes, albeit performed with the kind of flair one would expect from an Ocean. She has her eyes on much bigger fish, and she puts together a heist crew to pull off the kind of elaborate con/heist that, once again, you’ve come to expect from an Ocean. She intends to take a $150 million necklace at an event at the New York Metropolitan Museum. It’s the kind of brazen crime that has the potential for a compelling film. There’s going to be a lot of moving parts, and she’s going to need a good crew to pull it off. So she assembles an all-female team.

The first stop is Lou, played by Cate Blanchett. Lou is a long-time criminal partner and perhaps a bit of a mentor. She’s the perfect sounding board, and the two of them put the finishing touches on the plan. Mindy Kaling is Amita, who is an artist when it comes to forging jewelry. It will be her job to create a fake for the big switch. Awkwafina is the common thief Constance, who is ready to step up to something bigger. Sarah Paulson is Tammy, the fence whom Debbie relies on to turn her thefts into cold hard cash. Rihanna plays Nine Ball, who is the tech wizard in the group. Helen Bonham Carter is Rose. Rose is a well-known fashion designer, and it’s her clout that gets them into the event. The final piece of the puzzle is Anne Hathaway as actress Daphne Kluger, who is really a patsy and unknowing part of the scam. They arrange for her to be wearing the necklace to the event so that they can get to it. The best way to beat the necklace security is to get it out in the open, and Daphne is just the rube to bring it to them.

What transpires is an elaborate setup of circumstances that bring us into the conspiracy, and we witness all of the pieces falling into place. The film doesn’t end with the heist. There are still a couple of twists and turns that I certainly won’t reveal for you here. The film delivers all of those clever heist moments that have made the Ocean’s franchise the hit that it has been over the years. So what’s the problem?

It’s the cast. Each of the actors here delivers on their character. All are well-cast, and we get some deep characters who are truly worth rooting for, even if they are the “bad guys”. There’s not a weak link in the bunch. The problem is that there is little to no true chemistry in the cast. What you end up with are some very good individual performances that never gel together as the team necessary to make this film work completely. The other films all had tremendous chemistry, and it made it fun to be hanging out with those guys. Here, not so much. If there is any chemistry at all, it is between Bullock and Blanchett. There’s a rather nice banter between them that does indeed sell the relationship. The rest of the gang, though, are just very self-contained parts of the action. The cast didn’t have that glow of amusement like they were having the time of their lives together. The heist isn’t fun for these characters. That’s something Soderbergh really delivered in his three films. If they’re having fun, I can have fun and overlook the fact that I’m rooting for criminals here.

The heist itself is pretty clever, and there are enough of those close calls to keep the action compelling. There are moments when the pacing breaks down and we realize there’s a bit of difference between director Gary Ross and Steven Soderbergh. Sometimes the plan appears more complicated than it needs to be. I found several instances where it appears that steps exist only to complicate the plot because that’s what the audience is expecting. Unfortunately, I shouldn’t be thinking about that. I should be drawn in so completely that I’m hanging on the edge of my seat, and honestly, I wasn’t.

Ocean’s 8 is presented in an aspect ratio of 2.40:1. The ultra-high-definition 2160p  image is arrived at by an HEVC codec with an impressive average bit rate of 65-70 mbps. Color and texture combine to create the atmosphere and style of this film. When compared to the Blu-ray, this ultra-high-definition image presentation is hands-down one of the more stark contrasts between HD and UHD. The HDR allows colors to be bright when called for, or rich and dark. The textures shine through so that you can almost feel the fabrics. The gems are another huge nod to the capabilities of HDR. They sparkle like stars against both black and colorful backgrounds. Lighting is quite impressive in this film. The gala features subtle mood lighting that allows you to be immersed in the atmosphere. Water elements catch the colorful lighting rather nicely. It’s all wrapped in solid black levels that provide a kind of canvas for it all.

The Atmos track defaults to a pretty solid 7.1 mix. It all starts with an impressive storm near the start of the film with nice rain in the surrounds that are not just water falling but you can actually determine the kinds of surfaces the rain hits. The thunder ignites the subs, which aren’t usually dramatic here, but rather offer a nice smooth depth to everything particularly dialog. The gala provides an immersive effect with crowd chatter and the clinging of glasses and plates. The music is never a dominating factor but does fill the sound field quite nicely.

Deleted Scenes: (1:53) There are only two, and no individual selection.

Reimagining The MET Gala: (12:47) The film actually shot inside New York’s famous museum. This feature gives us all the logistic details and the atmosphere the location provided. It appears that VOGUE was the liaison between the film and the museum. There’s plenty of attention here on costume designs which are a huge part of the look of the film.

A Heist In Heels: (11:35) The film is described by cast members from Ocean’s 11 and The Devil Wears Prada. This feature continues the focus on style in the film. There are clips from the first film of this series and the original Rat Pack Ocean‘s 11 to compare style and demonstrate where this film fits in the franchise.

There are some nice nods to the earlier films. A highlight for me was a cameo by Elliott Gould. But it was that heavy connection to the other films that leads to a real disappointment in the final moments. Ross appears to be leading us toward a rather nice moment that never happens. He teases us to the point of frustration. Yeah, I know it was intentional, but it wasn’t the best way to finish the film. We tend to remember the first images and the end of a film the most. How a film ends creates the mood we leave the theatre with, and Ross decided to have us leave feeling somewhat frustrated. I don’t want to get into details here, but you’ll know exactly what I mean when it happens. Cute? Maybe. Clever? Debatable. Yeah, it was fun at times, and some harmless entertainment. But sometimes the film felt like “This is a flight to nowhere without any peanuts.”

Gino Sassani is a member of the Southeastern Film Critic's Association (SEFCA). He is a film and television critic based in Tampa, Florida. He's also the Senior Editor here at Upcomingdiscs. Gino started reviewing films in the early 1990's as a segment of his local television show Focus. He's an award-winning recording artist for Omega Records. Gino is currently working on his 8th album Merchants & Mercenaries. Gino took over Upcomingdiscs Dec 1, 2008. He works out of a home theater he calls The Reel World. Favorite films: The Godfather, The Godfather Part II, The Body Snatcher (Val Lewton film with Karloff and Lugosi, not the pod people film), Unforgiven, Gladiator, The Lion King, Jaws, Son Of Frankenstein, The Good, The Bad And The Ugly, and Monsters, Inc.
Sid Caesar: The Works Supergirl: The Complete Third Season (Blu-ray)