Posted in: No Huddle by Gino Sassani on October 4th, 2018 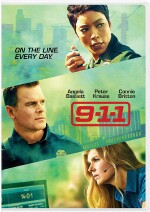 In the 1970’s my family watched a lot of television together. One of the shows that we rarely missed was Emergency starring Randolph Mantooth and Kevin Tighe, a Jack Webb show that lived in his Dragnet world. The series followed the adventures of fire station 51 and would bring us an hour of fighting fires and daring rescues. The show ran for seven seasons from 1972-1979 and was followed by a few television movies in the 1980’s. While there have been many shows in that mold, there really hasn’t been anything that came close to that series. Now Fox brings us 9-1-1, and it’s about as close to that old favorite as I’ve seen to date. Emergency is quite dated when you watch it today. With modern filmmaking techniques and production values, the rescues can be so much bigger now. Emergency also brought us a good cast of characters and never lost focus on those relationships and lives. That might be just the thing that makes 9-1-1 a worthy companion. The rescues might be bigger and flashier, but we still get compelling characters who we enjoy spending time with each week. That’s what just might give this series some lasting power. Now Fox has released the first season, and you can check it out, if you haven’t already. And if you’re old enough to remember that 1970’s show, this just might be your new Emergency.

Peter Krause returns to television as Captain Bobby Nash. He runs an L.A. fire station and rescue squad. As the series begins, he has just taken on a new rookie who has been nothing but trouble. He’s too immature and keeps sleeping with women they encounter on their calls. To make his infractions worse, he uses the station’s fire equipment for these encounters. We’re talking about Evan “Buck” Buckley, played by Oliver Stark. He’s on his last chance, and throughout the season he has to start showing more maturity or he’s gone. That maturity is found in the character of Abby Clark, played by television stalwart Connie Britton, who is the 911 operator who takes a majority of the season’s calls. They meet only by phone for a while, and he eventually becomes a source of strength as she deals with the emotional rollercoaster of taking 911 calls and being the caregiver for her aging mother, who is suffering from Alzheimer’s. Mom is played by veteran Mariette Hartley. These two characters end up being our portal to both worlds and the areas they overlap. Unfortunately, Britton’s only with the show for this first season and has moved on.

At the station there is Howie “Chimney” Han, played by Kenneth Choi. He’s the station clown, but things get pretty serious when he gets angry and ends up in a bad car accident. A piece of rebar gets stuck through his brain. But don’t worry. Chimney gets to return and provide the show’s lighter moments. Henrietta “Hen” Wilson is the strong silent type. She’s played by Aisha Hinds. She’s gay and in a long-term relationship that she jeopardizes when an old bad-girl girlfriend gets out of prison and tempts her in order to get custody of a kid they once shared. She’s the one least likely to panic and deliver the tough love. She’s also good friends with police officer Athena Grant, played by Angela Bassett. Grant has a boatload of troubles of her own. She’s married with a son and daughter when she discovers her husband is really gay. The son starts to get into serious trouble at school, and the daughter tries to kill herself because she’s being cyber-bullied. It’s taking a toll on her career, and she ends up in situations where twice she’s forced to ride a desk.

As I’ve already mentioned, the rescues here can be rather grand. We’re talking plane crashes in the ocean or a floor collapsing when a wedding reception’s dancing causes too much stress. The f/x are much bigger than they ever were on Emergency, and so are the stakes. The characters are all flawed and working out issues. These aren’t your typical television heroes. Captain Bobby Nash might be the most flawed of them all. He’s demanding, but he’s fighting addiction and the loss of his family that he blames on himself and his addiction. He feels responsible for an apartment building fire that he couldn’t help with because he was high. Now he keeps a tab on the lives he saves to try and reach the number of people who died in the fire in order to balance the books. It is these flaws that make the characters compelling. There’s also the added uncertainty with each rescue because of these character demons.

The end result is a series that is well worth watching and an easy one to binge. There are only 10 episodes, because it was a mid-season replacement last January. I remember it getting a ton of buzz from Fox during the football playoff season. That commercial featured a person needing to be rescued by a huge albino Burmese python. The pacing is what makes the time fly so well. I still watch Emergency on DVD from time to time. I guess I’ve been waiting 50 years for something to come along and fill that void. “Help is on the way.”

Gino Sassani is a member of the Southeastern Film Critic's Association (SEFCA). He is a film and television critic based in Tampa, Florida. He's also the Senior Editor here at Upcomingdiscs. Gino started reviewing films in the early 1990's as a segment of his local television show Focus. He's an award-winning recording artist for Omega Records. Gino is currently working on his 8th album Merchants & Mercenaries. Gino took over Upcomingdiscs Dec 1, 2008. He works out of a home theater he calls The Reel World. Favorite films: The Godfather, The Godfather Part II, The Body Snatcher (Val Lewton film with Karloff and Lugosi, not the pod people film), Unforgiven, Gladiator, The Lion King, Jaws, Son Of Frankenstein, The Good, The Bad And The Ugly, and Monsters, Inc.
“31 Nights of Terror” Exorcist II: The Heretic (Collector’s Edition) (Blu-ray) “31 Nights Of Terror” The First Purge (UHD Blu-ray) (4K)