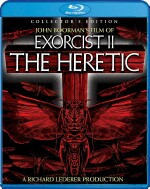 Maybe the world didn’t want any more Exorcist movies…at least not any that looked like Exorcist II: The Heretic. This follow-up to William Friedkin’s 1973 genre-defining horror classic is not only regarded as one of the weakest sequels of all-time, but some consider it to be one of the worst films ever made. I hate to throw out a ***SPOILER ALERT*** so early in my review, but…I don’t think this is the worst film ever made. ***END OF SPOILER ALERT*** Instead, I find Exorcist II to be a nonsensical, somewhat intriguing disaster whose fatal flaw is that it took everything that everyone loved about The Exorcist…and decided to do almost the exact opposite.

It’s been 45 years since Friedkin’s The Exorcist came out, and we all still remember Linda Blair’s foul-mouthed, projectile-vomiting antics as possessed 12-year-old Regan MacNeil. Exorcist II catches up with Regan (Blair) as a 16-year-old in New York City, where she is living with guardian Sharon Spencer (Kitty Winn) and undergoing psychiatric treatment under the care of Dr. Gene Tuskin (Louise Fletcher), who works with troubled children. Regan claims to not remember her demonic possession four years earlier, but Dr. Tuskin believes she is suppressing her traumatic memories.

The movie is also about Father Philip Lamont (Richard Burton), who is struggling with his faith after an exorcism goes wrong. Lamont is tasked with investigating the death of Father Lankester Merrin (Max Von Sydow, reprising his role from the first film), which exposes him to some of the late priest’s more controversial ideas and leads him to Regan. Eventually, Lamont’s investigation puts him and Regan on a collision course with Pazuzu, the demon from the first film.

The director is John Boorman, who made both bona fide classics like Deliverance and cheesy cult films like Zardoz. So it’s not a total shock that a Boorman-directed Exorcist film flies completely off the rails. Although the movie was made (and is set) just four years after the dark and moody original, it might as well be set on another planet. I completely understand why Boorman would seek to expand the visual palette of the first film, which took place in and around a Washington D.C. neighborhood following a sandy prologue in Iraq. However, the director and production designer Richard Macdonald rely heavily on (not totally convincing) sets and miniatures to stand in for Africa, South America, New York City, and D.C. That being said, the biggest head-scratcher is Dr. Tuskin’s retro-futuristic institute, which often looks like the inside of a spaceship.

That’s one of many puzzling choices made by Boorman and writer William Goodhart, although by all accounts Goodhart’s original script was slashed to bits as the production rolled along. The interesting thing about Exorcist II is that you can tell there’s a deliriously stylish movie dying to break through. In addition to Boorman, the movie’s pedigree behind the camera is very impressive (see Video and Audio sections of this review) and the filmmaker comes up with his fair share of striking shots and set-ups. The problem is the brights spots are submarined by moments like the interminable therapy sequences, in which Regan, Dr. Tuskin and Father Lamont’s minds are connected via a device called the synchronizer.

Another one of Boorman’s confusing decisions was to accentuate Blair’s sexiness, which isn’t just creepy because the actress was only 17 at the time (and Regan was supposed to be 16). Given that our previous relationship with the character was as an innocent, victimized little girl, seeing Regan tap dance in a skimpy outfit, wear a sheer robe, and try to seduce Father Lamont in the film’s final act feels more icky than sexy. It doesn’t help that Blair — who rightfully earned an Oscar nomination for her work in the first Exorcist — is flat-out terrible here, delivering awkward, unconvincing line readings.

Burton best days as an actor were far behind him at this point in his career, but the movie star still had his commanding voice. That being said, this is overall a creaky performance from the screen legend. On the other hand, Fletcher (fresh off winning a Best Actress Oscar for One Flew Over the Cuckoo’s Nest) is purportedly in her prime but largely wasted here. Honestly, the most interesting thing about her is how much she looks like Ellen Burstyn, who played Regan’s mom in the first film and (wisely) declined to appear in this follow-up. Von Sydow’s impact is minimal since Father Merrin only appears as a passive presence in flashbacks. I should also mention James Earl Jones, who doesn’t get enough screen time as Kokomo, another person who has personal experience battling Pazuzu.

You can feel this sequel rebelling against The Exorcist at every turn; whereas the first film made us wait until the final act for the head-spinning goods, Exorcist II gives us a fiery exorcism within the first five minutes. In the Special Features (see more below), Boorman states that he set out to make a movie about goodness as a response to the original movie’s darkness. Let’s go ahead and jump into the Video, Audio, and Special Features section, since the stuff that happened with this movie behind the camera is infinitely more interesting than what ended up on screen.

Exorcist II: The Heretic is presented in an aspect ratio of 1.85:1. The 1080p image is arrived at with an AVC MPEG-4 codec at an average of 35 mbps. This disc offers a 2K scan of both Exorcist II cuts from the original film elements. This clean, occasionally-cloudy presentation is a definite improvement over the movie’s disappointing 2014 Blu-ray release. Exorcist II was shot by cinematographer William A. Fraker (Rosemary’s Baby), and this disc does a better job of highlighting some of Fraker’s bolder, trippier flourishes. Colors are still on the muted side, but there’s greater contrast between the warmer flesh tones (which can be seen during Father Lamont’s journey to Africa) and the darker moments (the finale takes place in a familiar location). Black levels are relatively inky, even though this movie doesn’t spend nearly as much time in the shadows as its predecessor.

The DTS-HD Master Audio 2.0 track remains surprisingly dynamic and powerful for a mono presentation. Ennio Morricone’s menacing, tribal-tinged score impressively dances across the front speakers during the opening credits for the film’s Original Cut. The track also reveals a pleasantly robust bottom end during any sequence when locusts swarm across the screen or during any scene with the throbbing (and thoroughly silly) synchronizer. Dialogue is clear, if a bit hollow at times. But overall, this track is way better than it should be considering the film’s age and reputation.

All of the bonus material — except for the Theatrical and Teaser trailers — is new to this “Collector’s Edition” Blu-ray release.

Audio Commentary with director John Boorman: Right at the start, Boorman talks about finding the original Exorcist “abhorrent” because so much of it centered around “torturing a child.” As a result, the director defends his decision to try and make a movie about goodness (“Evil sells much better than goodness,” Boorman laments) and is openly candid about the project’s troubled production. For example, Boorman wanted to cast Jon Voight in the lead role; he felt Richard Burton was too old for the role and limited as an actor, since he relied so heavily on his voice.

Audio Commentary with special project consultant Scott Michael Bosco: The webmaster for thedigitalcinema.info offers a wealth of trivia surrounding this notorious film, including the fact that Lee J. Cobb’s Lt. Kinderman from the first film was supposed to play a role in this sequel prior to the actor’s death in 1976 and that Louise Fletcher’s Dr. Tuskin was originally conceived as a man. Bosco warmly talks about his personal history with the Exorcist films, which is why he comes off as a bit of an apologist for this debacle. On the other hand…

Interview with actress Linda Blair: (19:16) The movie’s leading lady is completely candid about her dislike for the finished product, referring to the original sequel script that was presented to her as “wonderfully well-written.” Things get a bit uncomfortable when she recounts having to seduce the much older Burton as a 17 year old and Blair still harbors some bitterness about having to learn how to tap dance. (Although she admits to ultimately respecting the craft.) In the end, Blair is glad some people find some technical merit in this sequel…but completely sympathizes with the larger segment of fans who hate it.

Interview with editor Tom Priestley: (6:57) The editor was a last-minute addition to the project; Priestley only had one day of prep time between wrapping up work on his previous film and beginning work on Exorcist II. In other words, Priestley’s experience is emblematic of what a debacle this whole production was.

Audio Commentary with Mike White of The Projection Booth Blog: White refers to this version of the film as the “International Version” since this shorter cut was released overseas about a month after the movie’s U.S. release. White points out some of the differences between this even-more-troublesome cut and the original version, including a messy opening sequence that splices in stills from the first film. Unlike Bosco, White isn’t afraid to lightly roast this sequel by pointing out some of the nonsense in the story.

I’ve gotta give the devil his due: this Exorcist II Blu-ray release from Scream Factory is exactly what this movie deserves.

The disc offers a clear visual upgrade from the previous Blu-ray, bonus material that provides backstory and honest context for the creation of such a notorious movie, and two different cuts of the film so you can see the choppiness for yourself. (The shorter “Home Video Cut” is kind of a travesty compared to the “Original Cut”…which itself is a travesty compared to The Exorcist.)

In the end, the biggest problem with Exorcist II — other than being somewhat dull and not making a ton of sense — is that it’s just not scary…which is a problem when you’re trying to follow one of the scariest movies of all time.