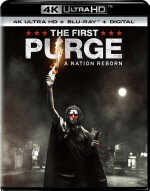 “This is the greatest s— show on Earth!”

The First Purge arrives in theaters a little more than five years after the (lowercase) first Purge rampaged into moviegoers’ consciousness as a nasty bit of R-rated, summer blockbuster counterprogramming. The movies are obviously quite popular, but I’ve never felt that any of them fully lived up to the killer concept at the center of this franchise. Unfortunately, that still holds true for The First Purge, which had a chance to deviate from the established formula in a variety of interesting ways, but ends up playing a lot like The First Three Purges.

In case you’re unfamiliar with the Purge films, here’s a quick primer. The original installment was set in 2022 and introduced us to the titular annual tradition in which any and all crime — up to and including murder — is legal in the U.S. for 12 continuous hours. That first flick inexplicably decided to confine all the action to a single household. However, the sequels — 2014’s The Purge: Anarchy and 2016’s The Purge: Election Year — began broadening the franchise’s horizons by venturing into the streets and gradually transforming the story’s sociopolitical undertones into overtones. So the time seemed right for yet another swerve, which is seemingly what the Purge brain trust was going to deliver by going back in time.

The First Purge is presented as a sociological experiment overseen by Dr. May Updale (Marisa Tomei) to see if allowing citizens to vent their aggression for one night would reduce the country’s crime rate. For this trial run of sorts, the mayhem is confined to Staten Island. The island is unofficially run by Dmitri (Y’lan Noel), a powerful local gang leader. Dmitri’s ex, Nya (Lex Scott Davis) is an activist who is passionately opposed to the Purge, unaware that younger brother Isaiah (Joivan Wade) is getting ready to take extreme measures to try to support his family.

I didn’t catch a specific year for the setting of The First Purge, but the action is set shortly after a new regime calling itself the New Founding Fathers of America (NFFA) comes into power in a country that is violently and increasingly divided. (I’m sure any resemblance to current events is purely coincidental.) If you weren’t sure whether the filmmakers had heard the jokes about the Purge becoming a real-life thing under the current administration, The First Purge features a commander-in-chief who actually promises to “make you dream again”. There’s also an intense sequence later on where a female character is aggressively grabbed by…a body part she wishes had remained untouched.

The previous three Purge movies were written and directed by James DeMonaco, who also penned The First Purge. Taking his place in the director’s chair is Gerard McMurray (Burning Sands) who sticks pretty close to the dark and outlandish template. (I don’t buy that so many of the early Purge participants in this movie would be as wildly creative with their costumes and modes of killing as they are right off the bat.) In fact, my biggest disappointment with The First Purge is that it sticks too close to the established playbook: we spend about 20-30 minutes with a disparate group of characters a few hours before the start of a Purge…eventually, their paths cross, and we watch them run around while they struggle to survive the night.

To be fair, we do get a handful of scenes with Dr. Updale and a slimy NFFA lackey (Patch Darragh) observing the action from a safe location. And I did enjoy the violent flair and stylistic touches McMurray brought to the table — including the icy blue contact lenses participants are required to wear — along with the notion that this first Purge starts off as kind of a bust.

Noel makes for a reasonably convincing and charismatic action anti-hero once Dmitri and his crew decide to protect State Island from the Purge. But the only other character who really pops is Skeletor, a truly frightening junkie/Purge enthusiast played by Rotimi Paul. (It’s unclear how and why Skeletor stopped himself from killing a bunch of people pre-Purge.) At the other end of the spectrum, Tomei is utterly wasted in a nothing role that doesn’t even allow the Oscar winner to chew some scenery.

The First Purge is presented in its original aspect ratio of 2.39:1. The ultra-high-definition 2160p image is arrived at by an HEVC codec with an average bit rate of 60 mbps. This is a rather dark film with most of the action taking place at night. Black levels are the key to this ultra-high-definition image presentation. You get some rather nice inky blacks with plenty of shadow definition to be able to see all the action. Contrast is just as important, and it plays out with source lighting like street lamps. The HDR kicks in best with the camera contacts that participants wear to record their actions. They glow blue, red, or green, and the presentation here gives them wonderful pinpoints of bright color against the darkness. In some of the more atmospheric shots all you can see in the dark are the glowing lights. Understand that some of the footage comes from these cameras or street-mounted cameras and is intended to show lower quality.

The DTS:X track defaults to a nice 7.1 mix. Dialog is the center piece to the audio presentation and you can hear it with crystal clarity. The surrounds really provide the atmosphere where you can hear things coming from the surrounding darkness and night. The subs help to bring depth to the audio and fills up the room with some powerful explosions toward the end of the film. I was reminded of the scare zones at the Universal Horror Nights event with scraping sounds and glass breaking as well as plenty of screams.

A Radical Experiment: (4:57) Cast and crew talk about the film, but there’s no real focused message here. It comes out like random thought. The feature finishes with a look at some of the key characters.

Bringing The Chaos: (1:24) This feature looks at the action, but it’s much too short to really cover anything.

The Masks Of The First Purge: (1:22) Again this is too short to do anything but offer you a glimpse of the masks.

To me, The First Purge suggested the possibility of a soft reboot for the franchise but ended up being more of the same. Don’t get me wrong: this has been an extremely lucrative formula for Universal and Lionsgate: the series has grossed $320 million worldwide on a combined budget of $35 million. (And that’s not even counting whatever this fourth installment ends up making.) It just seems to me like a squandered opportunity to examine all this death and destruction from a different perspective.