Posted in: The Reel World by Brent Lorentson on October 12th, 2018 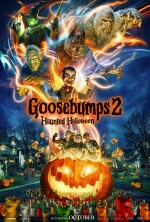 When I was in elementary school, R..L. Stine was the author all the kids were reading.  For me Goosebumps was sort of a gateway that opened me up to horror, and I’ve been a bit obsessed with the genre ever since.  If you were a kid of the 80’s, I don’t think it’s possible for you to not know who R..L. Stine is. Even if you somehow never managed to read one of his books, there was also the successful TV series that came out in the early 90’s.  For years I would have said Stine would always be the most successful writer for kids. Well, that all changed once a certain wizard hit the scene and changed pop culture.  So when they announced that there would be a live action Goosebumps film, I was surprised, but I was curious what it would be like. Could his stories still entertain the masses?  I had fun with the first film, and when it was done, it struck me how these kinds of films simply just are not made any more, films the whole family can enjoy but are targeted at younger kids.  Sure, there are the superhero films, but those are more for the teens, and let’s face it, the millions of adults who grew up reading comics.  But what happened to the kids-in-peril films that were huge in the 80’s and just seemed to vanish with time?  Goosebumps seems to be the franchise that has jumped on the 80’s throwback bandwagon, but has wisely targeted not just those looking for a little nostalgic flashback, but also younger kids. I’m talking the 11-and-under crowd, and I think this is a great thing.

The sequel welcomes us to the town of Wardenclyffe, where the town’s biggest claim to fame is being the home of one of Nikola Tesla’s inventions.  As it goes with most horror tales, this is a quiet and quaint little town, but we all know that it won’t be for much longer.  Sarah (Madison Iseman) is a bit overwhelmed, working on an essay she needs to complete to send in to Columbia University, and in a way this is kind of a strange setup, because though she’s the first character we meet, I wouldn’t say she’s the star of the film.  The real stars of this film would be her younger brother, Sonny (Jeremy Ray Taylor) and his best friend, Sam (Caleel Harris).  The two are setting up their own company, “Junk Brothers”, where their hope is to make money and find some cool stuff along the way.  It just so happens their first customer takes them to the former home of R..L. Stine, and the house has missed more than its fair share of spring cleanings.  It’s while they are cleaning Sonny stumbles across a book that has been hidden away for decades, one that has a lock on it (for those who saw the first film, you already know about the kind of trouble this book will bring), and once the boys open it, they are surprised by a ventriloquist dummy, the infamous Slappy.

What works well here is the relationship between Sonny and Sam, so when Slappy enters the mix, I really enjoyed the direction this went.  This portion felt almost like a children’s version of Child’s Play, especially when Slappy starts to not get his way.  There is a lot of fun that could have been had just with the kids and Slappy, but then the film ramps things up when Slappy recruits his army of terrifying ghouls and goblins as he brings all of the town’s Halloween decorations (and certain candies) to life.  While this may feel like a bit of a recycling of the first film, it seems like there was more of a budget injected into the effects, and we get some pretty fun monsters this time around.

There are some who could be overcritical of the film. and those who do that I feel are missing the point and the audience of this film.  The story is very self-aware, especially at a moment when R..L. Stine (Jack Black) makes an appearance when he discovers one of his books as unleashed havoc once again.  Ken Jeong also joins in the fun as a neighbor who seems to go a bit overboard in the Halloween decoration department. As expected, he’s responsible for many of the film’s laughs.

There is one thing that is missing from this film that really had me hooked with the first film, it’s the heart of the first.  I really liked the relationship between Stine and his daughter in the first film, and it definitely managed to get us attached to the characters more.  This film just doesn’t have that kind of heart despite it doing a good job at developing the friendship between Sonny and Sam.

Despite it not being quite on par with the first film, I still believe this is the kind of family film we need more of.  This is one of those films that when it comes out on DVD and Blu-ray I’ll be picking up and putting it on my list of films to check out during the Halloween season. While it’s not perfect, this is the kind of film that can get kids interested in other monster films. After all, they don’t seem to make monster films like they used to any more, so one can hope this could open the cinematic doorway to kids and introduce them to the classic Universal monsters, and who knows what other ghoulish titles they may take a liking to over time.

Brent Lorentson is a horror writer and film critic based out of Tampa, Florida. With a BA in Digital Film, he co-wrote and co-directed Scavenger Hunt. His short stories have appeared in various horror anthologies. In 2019 his short script Fertile Blood will be a part of the anthology horror film Slumber Party. He is currently working on his first novel A Dark and Secret Place set to be released in late 2019. Favorite Films: Taxi Driver, Fight Club, I Saw the Devil, The Wild Bunch, Dawn of the Dead, A Clockwork Orange, Pulp Fiction, Heathers, The Monster Squad, and High Fidelity.
Skyscraper (UHD Blu-ray) (4K) Bad Times at The El Royale