Posted in: Disc Reviews by Gino Sassani on October 12th, 2018 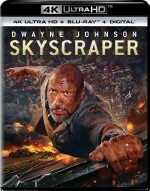 Dwayne Johnson appears to be a pretty busy guy. In addition to the HBO series Ballers about to enter its fourth season, Johnson puts out a couple or more films a year. We’re not talking about small independent films, but rather huge, high-budget and big f/x films. Next year will see Jungle Cruise and Jumanji 2,  following with San Andreas 2, Suicide Squad 2, Black Adam, and a remake of Big Trouble In Little China, all arriving in the next couple of years. This year saw Rampage, which comes to home video next week. It’s a busy life for Dwayne Johnson, who appears to have dropped “The Rock” from his name. I sure hope it didn’t hit anyone on the head. Now he’s starring in Skyscraper, which shamelessly combines elements of Die Hard and The Towering Inferno. In Skyscraper, Johnson shows us that he’s intent on hanging around for a while… this time from 220 stories high.

This time around Johnson plays Will Sawyer, who used to be a SWAT team member until his last mission turned on a bad call and left him badly burned and with a missing leg. Ten years later he’s recovered from the burns and is married with two kids to the nurse who took care of him back when he was injured, played by Neve Campbell. He runs his own security company and is about to get the biggest break of his second life. Another injured member of his old team, Ben (Schreiber), works for a wealthy Hong Kong building designer and gets Will the coveted job of certifying the building’s security and safety protocols for the insurance underwriters. He’s just about to finish the job when he discovers there might be some grudges from his bad call, and there are absolutely some grudges against billionaire builder Zhaoa Long Ji (Han), and some nasty players have used him to disable the fire suppressant system and set fire to the 96th floor. It’s not just his honor at stake now. He’s been framed as the culprit, and his family is still in the building.

The plot is certainly pretty simple and doesn’t require too much of a struggle to figure out. It’s all just a setup for Johnson to go on a one-man crusade to break back into the burning building and try to save his family. What follows is some of the most unlikely series of daring stunts and near-misses intended to keep us on the edge of our seats. Mission accomplished. If what you’re looking for here is an amusement park ride that spends nearly two hours swinging you around from one precipice to another, strap yourself in, because that’s exactly what you’re going to get here.

The centerpiece of the film is this new tallest building on the planet called The Pearl. It’s three times higher than the Empire State Building and features a large ball cradled at the building’s top, which is where it earns its name. I have to admit that these guys didn’t pull any stops with the building, and it’s the prominent setting throughout. The ball itself is a high-definition room filled with state-of-the art monitors that allow you to appear as if you’re standing on the sky. It’s part holodeck and part high-tech hall of mirrors. Ji shows it off in the film’s beginning, and it’s not really a spoiler here to tell you that it is going to figure quite hugely in the thrilling climax. The building is a combination office building and residential building with a center that features a wildlife park 2000 feet in the air, complete with huge waterfall. The Pearl is quite a nice computer-generated setting that takes you nearly a mile into the sky.

The film falls short of Die Hard when it comes to the bad guys. They’re really pretty thinly developed and aren’t going to breathe the same rarefied air as Alan Rickman no matter how high in the sky the film plays out. Rickman’s Die Hard bad guy is one of the best in film history. Skyscraper? Not so much. The real highlight is leather-clad Xia, played by Hannah Quinliven, who kills with a stone-cold stoicism that allows her to steal a few scenes throughout the film. But again, she’s no Alan Rickman. So don’t really look so hard for character development or any kind of a connection here. You get just enough of Sawyer’s family and cute kids to give you something of an emotional target to threaten.

This film is all about the stunts. Sawyer’s catchphrase is “If you can’t fix it with duct tape, you’re just not using enough duct tape.” Yeah, I know, it’s not “Yippee Ki-Yay Mother ….”. But it is kind of amazing what Johnson can do with the sticky standby. He does some Spider-Man glass walking with the stuff, and there’s a lot of hanging from breaking pieces of building. Johnson is a bit of a MacGyver throughout the film. He doesn’t exactly piece together an army tank out of paperclips and an old sneaker, but I felt a lot of that kind of methodology throughout the film. You can say that they take the slip-and-just-catch-yourself gimmick perhaps a little too far. Some of the stunts are truly spectacular, and they feed into the amusement-park-ride theme for the evening. That’s the only way you’re going to have fun here, and there is plenty of fun to be had.

The CGI is pretty good throughout. There were a couple of moments when the film does bring you to the ledge and makes you grip the theater seat a little tighter. But I have to say that some of the fire didn’t quite pass the smell, or rather choke test. CG fire is an odd animal that can really ruin a good danger moment, and it does for me here. Yeah, I know. They weren’t going to set a huge building on fire, but I have to admit I believed the fire in the 40+ year old Towering Inferno more. I think there were some missed practical f/x moments here that would have blended well with the environments to keep me gripping that seat a little tighter, and certainly a little longer. Overall there are some spectacular magic tricks here.

Skyscraper is presented in an aspect ratio of 2.40:1. The ultra-high-definition 2160p  image is arrived at by an HEVC codec with an impressive average bitrate over 70 mbps. If there’s one thing HDR loves, it’s flames. The only thing better that flames are flames set against a very dark background, and that’s what you get here. The rich colors of the flames provide fine contrast against inky blacks that allow both to exist side by side. There’s detail in the close-ups, particularly of Dwayne Johnson with his dirty-singed face. The building itself is a wonderful CG creation that blends flawlessly with the live action elements of the film. There are a lot of brightly-lit control panels that deliver a crystal-clear sharpness that isn’t quite there in the HD version of the film. The increased detail really takes you into the heights here so that you find yourself holding on tighter to your theatre seat.

The Atmos track defaults to a pretty solid 7.1 mix. The surrounds are extremely aggressive here. You’ll be assaulted with echoes in the hologram center, breaking glass, wind, and flying bullets throughout the immersive audio presentation. The subs bring some nice bottom to the sound that provides depth without ever really overpowering the rest of the sound. Placement is really crucial here, and there is plenty of care taken to recreate the environments for impact. The score is usually subtle and acts as the intended emotional tilt without getting in the way. Dialog remains clear over all of the turmoil.

The extras are all on the Blu-ray copy of the film as well as the UHD copy. The UHD extras are in 4K but not HDR..

Deleted Scenes: (12:10) There are five with an optional director commentary and a play-all option. The last is really a gag scene that teases Bruce Willis.

Extended Scenes: (10:18) There are five more with the same director commentary option and play-all. I’m not sure why these are separate, because even the deleted scenes are pretty much extensions.

Dwayne Johnson – Embodying A Hero: (4:04) Johnson talks about his character.

Inspiration: (4:12) Johnson introduces us to Jeff Glasbrenner, who is a vet amputee. He was a consultant on the film, and we see him give an inspirational talk to the cast and crew.

Opposing Forces: (2:35) This one takes you behind the scenes of the action scene between Neve Campbell and Hannah Quinlivan, who play the female leads and have a girl fight in the back of a police car.

Friends No More: (3:21) This one takes us behind the scenes of Johnson’s fight with Pablo Schreiber early in the film.

Kids In Action: (2:40) A look at the kids who played Johnson’s children in the film with some behind-the-scenes footage, and the young actors provide their insight into the production.

Pineapple Pitch: (1:37) Apparently Johnson was supposed to express his willingness to do the film by sending the director a photo of a pineapple. The two tell the story here.

The film sets out to entertain, and it honestly does that well. I’m afraid that seeing a skyscraper on fire these days does elicit some memories of 9/11, and I suspect some of you might have a problem there. Johnson plays a virtual superhero here. One scene in particular feels like something out of a Marvel film as Johnson holds a collapsing bridge together long enough for his family to jump a gap by pulling on separated cables much like Spider-Man trying to hold a ferry together or stop a subway train. I felt like I got off an E-ticket ride, and I think I might have even gotten a few tips for some home repairs I might get inspired to try. “Got any duct tape?”

Gino Sassani is a member of the Southeastern Film Critic's Association (SEFCA). He is a film and television critic based in Tampa, Florida. He's also the Senior Editor here at Upcomingdiscs. Gino started reviewing films in the early 1990's as a segment of his local television show Focus. He's an award-winning recording artist for Omega Records. Gino is currently working on his 8th album Merchants & Mercenaries. Gino took over Upcomingdiscs Dec 1, 2008. He works out of a home theater he calls The Reel World. Favorite films: The Godfather, The Godfather Part II, The Body Snatcher (Val Lewton film with Karloff and Lugosi, not the pod people film), Unforgiven, Gladiator, The Lion King, Jaws, Son Of Frankenstein, The Good, The Bad And The Ugly, and Monsters, Inc.
The Catcher Was a Spy “31 Nights Of Terror” Goosebumps 2 Haunted Halloween